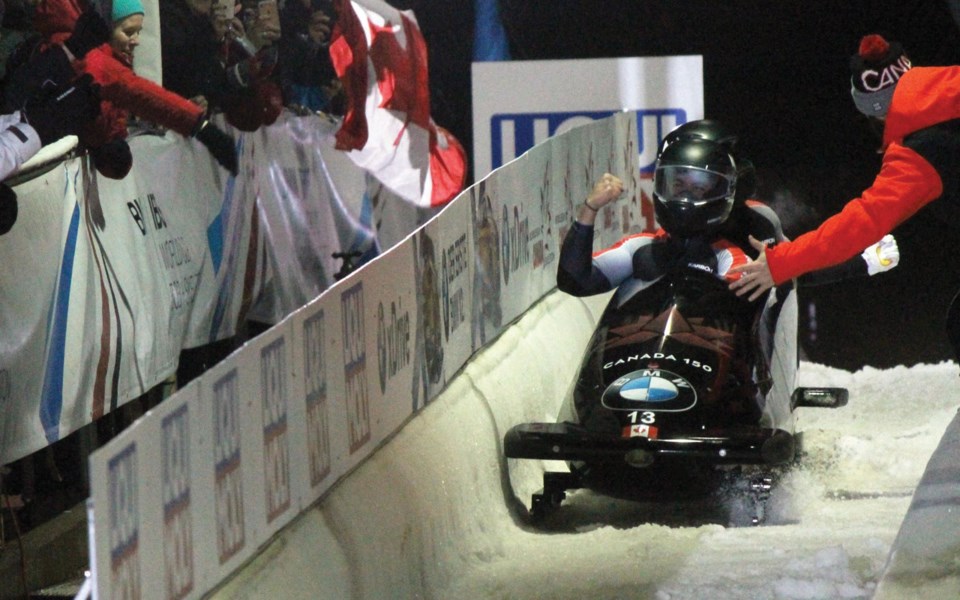 Chris Spring, shown here in IBSF World Cup action at the Whistler Sliding Centre in 2017, came away with a four-man Europe Cup win on Jan. 9.File photo by Dan Falloon

Chris Spring has returned to the bobsleigh track in style.

The former Whistler resident, now in Calgary, came through with three medals in the Europe Cup stop at Altenberg, Germany last week, including a four-man victory on Jan. 9 with Mark Mlakar, Mike Evelyn and Shaquille Murray-Lawrence.

“Today I learned a great life lesson. If you just keep going, keep showing up, be patient, endure and believe, then you can still surprise yourself even at my age,” Spring said in a release.

Spring also medalled in both two-man races, taking bronze with Mlakar on Jan. 7 and silver with Evelyn on Jan. 8.

The week marked nine years since Spring suffered a crash at the very same track that sent him and two other sledders to the hospital.

“We were very happy to come out today and lay down the runs we did—from the starts and right through the driving from Justin. We really wanted this for each other today. This is a great way to start the season and we look forward to building on this heading into next week in St. Moritz,” Sommer said in a release.

Earlier in the week, Kripps and Stones took fifth in the two-man race, while Friedrich and Thorsten Margis topped fellow Germans Johannes Lochner and Eric Franke and Austrians Maier and Markus Sammer for first.

On the women’s side, Christine de Bruin and rookie Sara Villani also took fifth, while Germany’s Laura Nolte and Deborah Levi came away with the win over fellow Germans Kim Kalicki and Ann-Christin Strack. Mariama Jamanka and Leonie Fiebig of Germany and Austria’s Katrin Beierl and Jennifer Onasanya tied for third.

In other sliding sports, Canada skipped the FIL World Cup at Sigulda, Latvia on Jan. 9 and 10 to train, though Whistler was represented.

Veronica Ravenna, representing Argentina, took 24th on the women’s side.

Canadian athletes raced the week prior at Konigssee, Germany. Whistler’s Reid Watts placed 24th in his first action of the season while in doubles racing, Tristan Walker and Justin Snith were 18th.

At his first FIS World Cup contest in more than a year, Canadian snowboarder Max Parrot came out on top.

Parrot rebounded from a second-run crash to land a cab 1620 on his third attempt to seal the deal.

On the women’s side, Zoi Sadowski Synnott (162.40) topped Japan’s Kokomo Murase and Austria’s Anna Gasser for the victory. No Canadians made the final, with Jasmine Baird and Laurie Blouin finishing in the middle of the pack in 15th and 16th, respectively.

Canadians cracked the top 10 in both men’s and women’s competition in the ski event. On the women’s side, Megan Oldham and Olivia Asselin took ninth and 10th, respectively, as Switzerland’s Giulia Tanno topped France’s Tess Ledeux and Estonia’s Kelly Sildaru for first place.

No Canadians made the finals of the Jan. 10 slalom, won by Austria’s Marco Schwarz over Germany’s Linus Strasser and Great Britain’s Dave Ryding.

In women’s action, no women made the finals of either race at St. Anton, Austria. Switzerland’s Lara Gut-Behrami topped Italy’s Marta Bassino and Switzerland’s Corinne Suter in the Jan. 10 super-G and Italy’s Sofia Goggia was victorious over Austria’s Tamara Tippler and Breezy Johnson of the United States in the Jan. 9 downhill.