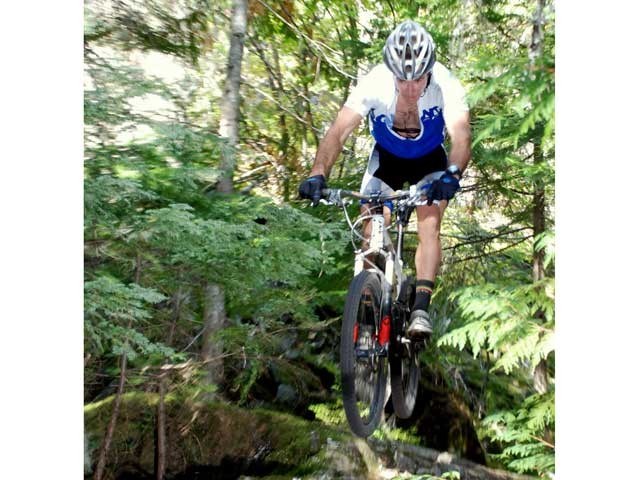 Why Ride When You Can Fly Matt Bodkin ollies his bike over a rock face on Mandatory Suicide in the second annual Soo Valley Rumble on Saturday. Bodkin won the men's race and was the only rider under three ours. Photo by Todd Hellinga

Conditions were perfect for the second annual Soo Valley Rumble, which was a relief for riders who felt it would have been a much longer day in the rain.

The course started at the north entrance to Soo Valley, near the dam, and followed a series of logging roads up more than 1,000 metres to the North Flank Trail and another climb to the Rick’s Roost descent. From there the course followed the reworked Cat Scratch Fever trail, to Mandatory Suicide and Mel’s Dilemma. There the trail crossed Alta Lake Road and did a full circuit of the Emerald Forest before following all of A River Runs Through it to Rainbow Park. The last section of the race sent riders up north and south Danimal to Lower Sproatt, and down Upper Beaver Pass to the lower part of Whip Me Snip Me.

Whistler’s Matt Bodkin was the first rider to the finish line in two hours, 55 minutes and 25 seconds.

Getting over strep throat, Bodkin’s strategy was to take it easy on the climb and let a few other riders get ahead, but keep them in sight, then pick up the pace on the singletrack. He caught Chris Clark on the first descent from the high point in the Soo Valley, and leader Jason Shorter in the Emerald Forest. He had built a lead of about two minutes by the end of River, and extended that to nearly five minutes by the finish line.

“I missed this race last year and I was kind of sad because it was on all those Emerald (Estates) trails that I’ve been riding for years, and I’m one of the few people who enjoy them,” said Bodkin. “I was a little disappointed with the course changes for this year because those trails weren’t on the route, but the climb up the Soo was so beautiful and unique, and the conditions were so perfect that it was a really enjoyable day. If it had been wet I think it would have been a different story, the climb up Danimal would have been a nightmare.”

Bodkin will race in the pro category at the Cheakamus Challenge this weekend. Although he expects Max Plaxton to defend his title, there is always a race to be the first Whistler rider to the finish line.

“First local is always a good battle — in the old days they used to give out a ski pass for that… but now it’s all about bragging rights. I’m going to put my best foot forward in that race, and try to be the first local to the line.”

Clements hasn’t raced as much this season as past years, and found herself enjoying the course more than she expected.

“The race was awesome, it was super-grass roots and Jerome (David) and Benoit (Renault) did a great job making sure the course was well-marked,” she said. “It was interesting, especially climbing over Cougar Mountain. I’ve never raced that way before but I ride it all the time.

“Lots of climbing but it wasn’t that technical, but then suddenly you find yourself in pick-your-line stuff in the Emerald Forest that was totally different. It kind of revived you after all the hammering up hills. Riding Danimal backwards was terrible, but the course choices made things interesting and the race felt like it flew by.”

The only junior in the race was Tyler Allison who finished in 3:21:03, 13 th overall among racers.