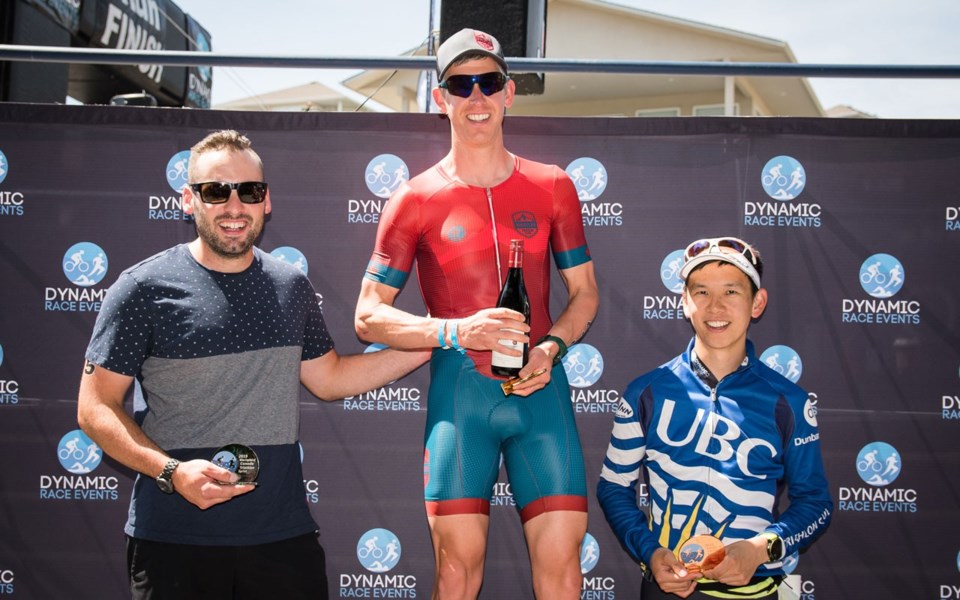 Chris Bowen very nearly doubled up in Oliver on the weekend.

The Whistler Triathlon Club member started off the weekend by capturing the sprint distance event at the Wine Capital of Canada (WCOC) Triathlon on Saturday, then in the longer Oliver Half Iron, he placed second overall while winning the 30-to-34 age category.

"It was a hot weekend to race, for sure," he said. "It was my first time doing that, racing two races in two days."

For Bowen, the weekend was a stepping stone on the path back to Whistler, as he hopes to star at the Subaru Ironman Canada race on July 28.

"Normally, with a longer race, you want to do something a bit before, but usually quite a relaxed session. It was certainly different to put in a short, harder workout the day before," he said. "I wanted to see how I'd react to that, being a little bit more tired the next day."

Coming off his win in the roughly 23-kilometre race in which he topped runner-up Jesse Van Oene by 71 seconds, Bowen was keen to ramp it up the following day in the Half Iron. There, he finished 14 minutes and 11 seconds behind Martin Caron for the overall crown in the 91-km contest.

"I definitely felt the effort of the previous day when I got on my bike. It was super hot out there on the run, so I dialled the effort back a little bit at the start," he said. "I was able to come through in the second half of the run and get into second spot, which is better than I expected."

In addition to the heat, Bowen identified strong winds as challenges that he hadn't had to deal with to the same degree in Oliver during prior trips.

Bowen is excited to do this weekend's inaugural Whistler X Triathlon on Sunday, June 9 as part of a relay team. He said he will welcome the change of pace, embracing off-road elements that are near and dear to Whistler's heart.

"That's a really exciting event that's going to be a local thing put on and presented by the tri club, which is really cool," he said. "It's just nice to mix it up and have some different events out there for people who have done a few triathlons before, and it's easier for people who are just getting into things as well."

Also in the Half Iron, Marla Zucht won her 45-to-49 age category and was the third woman to finish, while Karen Norton took third in the 30-to-34 age division. Whitney Reynolds and Jodi Carter took fifth and 11th, respectively, in the 45-to-49 event. Norton also won her age category while placing third overall among women in the WCOC sprint triathlon. Silvie Votrubova, meanwhile, was fifth in the 30-to-34 women's sprint while Frances Dickinson and Shannon Didier were fourth and eighth, respectively, in the women's 45-to-49 contest. Maridee Fitch took sixth in the women's 55-to-59 category in the standard distance.