Boxer back on top after rematch

Going into Saturday's bout in Powell River, Geoff Bate had registered just one loss in seven fights and was the reigning B.C. Golden Gloves champion for the 75 kilo weight class.
May 14, 2010 8:46 AM By: Andrew Mitchell 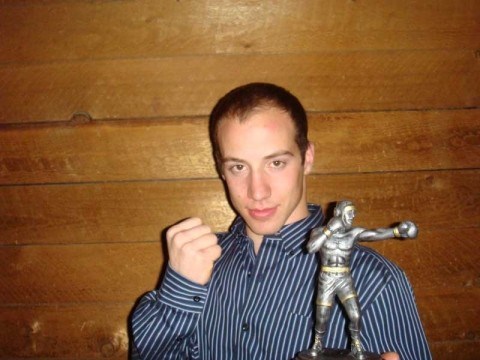 Going into Saturday's bout in Powell River, Geoff Bate had registered just one loss in seven fights and was the reigning B.C. Golden Gloves champion for the 75 kilo weight class. He had a chance to do that one lost fight over with a rematch against that opponent, but it would mean jumping up into the open class three fights early.

Amateur boxers are allowed to remain in their class for 10 fights, after which point they graduate to the open class where they can face fighters with far more experience. The open class bouts are also longer, with three rounds of three minutes instead of two-minute rounds.

Bate went into the rematch with a strategy - the last time around he ran out of gas after the second round and saw his four point lead evaporate. This time around he paced himself and won all three rounds to win by four points.

"Last time (Bate) ran out of steam because he was putting too much power into his punches," said coach Sasha Gier. "This time the plan was to box, keep distance and keep the other guy at the end of the punches, and this time Bate's endurance was far better.

"I think the other guy expected Geoff to run out of steam even faster because of the three-minute rounds, but after the second round he was still reasonably fresh and connected with a lot of right crosses and a lot of jabs."

Bate's next fight is the Buckskin Gloves Tournament on the May 29 weekend in Quesnel, then up to two more fights before taking a break for the summer.

"We'll take it easy, keep his conditioning at around 50 per cent so he can enjoy life, work on some technical points and finesse, and then get back into it in September in the open class," said Gier. The goal is to have 10 to 12 bouts next year, to win his weight class in the B.C. Golden Gloves tournament and take part in the Canadian Golden Gloves tournament at the end of next season.

Whistler Racket Club back in the swing of things
Jun 19, 2020 2:00 AM
Comments
We welcome your feedback and encourage you to share your thoughts. We ask that you be respectful of others and their points of view, refrain from personal attacks and stay on topic. To learn about our commenting policies and how we moderate, please read our Community Guidelines.