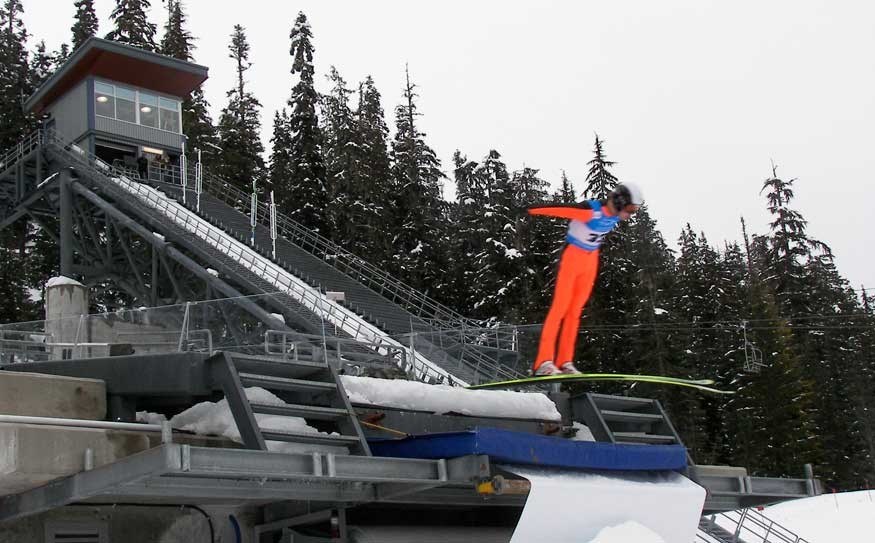 International calibre ski jumping landed back in Whistler on the weekend.

For the first time in more than two years the two jumps at Whistler Olympic Park (WOP) were put into use.

The Canadian National Ski Jumping Championships were held at WOP along with the Nordic Combined National Championships on Saturday, March 31 after a week of training.

Mackenzie Boyd-Clowes, 21, proved to be the king of the hill by taking top spot in the senior men's competitions. He jumped the farthest on both hills. His second Normal Hill jump was 104.5 metres while his closest competitor, Germany's Martin Schmitt, flew a distance of 100.5 metres.

The Large Hill competition also featured Boyd-Clowes landing long with a lofty flight of 142 metres on his second jump while second place finisher Schmitt travelled only 130.5 metres in his longest jump.

Brent Morrice of Ski Jump Canada said after the event that he was pleased Canada's national champion beat a former world champion.

Schmitt and Boyd-Clowes both competed at the 2010 Games. Boyd-Clowes finished 44th on the Normal Hill and 45th in the large hill competition while Schmitt left Whistler Olympic Park in 2010 with a silver medal around his neck.

The men's Normal Hill and Large Hill podium results were virtually the same. Boyd-Clowes, who lives in Calgary, won both events, Schmitt was second and Germany's Kevin Horlacher placed third.

The women competed on the Normal Hill in an event that only featured Canadian athletes.

Taylor Henrich of edged out a more experienced Nata deLeeuwa to claim the Canadian national women's championship by twelve and a half points.

He added that next year he wants to see the American women's team participate in the Canadian national championships.

Alexandra Pretorius placed third in the women's competition. All of the female competitors are members of the Altius Nordic Ski Club with Boyd-Clowes.

A pair of Canadians who train in Calgary placed one and two in the Junior Men's competition on the Normal Hill. Matthew Soukup placed first and Nigel Lauchian followed in second. American Nicolas Madden of Steamboat Springs.

Morrice said he was very pleased with all aspects of the event and the facility.

"My hand extends out to the Callaghan Winter Sport Club and the Whistler Legacies for all that they have done in preparing these facilities and all the volunteers," said Morrice.

He said nothing is set yet, but he wants to ensure an event is held at WOP next season.

"I assure you we are going to be here next year," said Morrice. "I'm committed to working as hard as I can to make that happen. Ski Jumping Canada is going to make sure this is not a white elephant and we're going to do everything in our power to make sure we're utilizing this facility because it is state of the art. It is so close to the one in Sochi."

Only a small crowd gathered to see the events. The early morning crowd at the base of the jumps decreased in size as the clouds thickened and snow started falling.