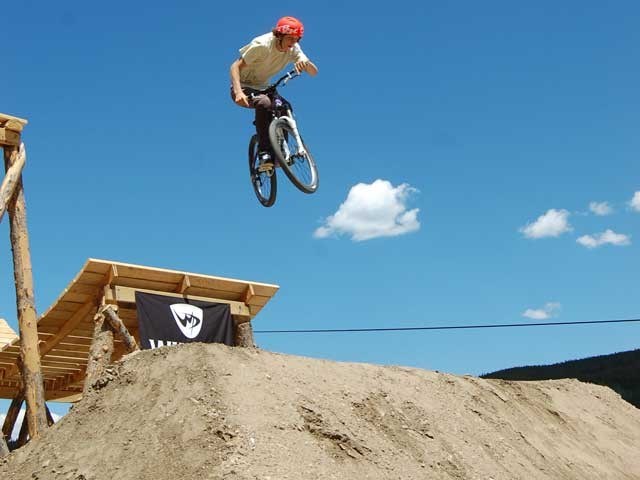 Teen Spirit Whistler's Brandon Semenuk airs out in the Crankworx Colorado slopestyle qualifier, before going on to win the event. Photo by David Yoo

Whistler’s Brandon Semenuk got better as the day went on at the Crankworx Colorado slopestyle last weekend, crashing in his first run, and pulling it together in round two to go into his final run in fourth place.

Up against the top slopestyle riders in the world, Semenuk stepped it up in his final run. He started with a no-hander on the drop, followed up with a big 360 over the gap, followed by a superman seat grab over the second gap, a back flip onto the step-up ramps, a tailwhip over the step-down gap, and a 360 off the next step-down. The judges awarded him a score of 280 points and first place in the competition.

Although he’s one of the top riders in the sport, this was the first time that Semenuk, only 17, has won a major event.

“The course was just super-flowy, it really flowed well from start to finish and it was fun to session it,” he said of Crankworx Colorado. “I just tried to link as many tricks as I could, it was a long course and if you try to trick all of the features you’re going to score better. It was a lot of the basic tricks, nothing super-gnarly, although I managed some of the bigger tricks off the bigger obstacles. I like throwing in lots of truck drivers, tailwhips to stepdowns, super-seat grab Indians, bar spins, and whatever. I actually like all the tricks, and practice everything.”

During the winter Semenuk lives in Aptos, California where he trains with Cam McCaul, Jamie Goldman, Alex Reveles and other top pros. Whistler is still his summer home, when he’s not on the road competing, or travelling to photo shoots and film sets.

“It’s definitely good to have a big group of guys to ride with all winter, we’re all just progressing and pushing each other,” he said.

“I was so stoked to win,” he said. “As soon as I got to the course I thought through all the lines I could put together, and saw that it was a good course for me.

“I fell on my first run, but my second run was pretty good and my final run was definitely a lot better.”

Before discovering the joys of dirt jumping and freeriding, Semenuk was one of the top junior cross-country riders in the province. 2007 was his break-through year, with consistent results to place 15 th overall in the European Qashquai Challenge, and a third place finish at Crankworx, Whistler.

He had mixed results in the 2008 Qashquai, placing third in the first event at Munich, but not doing well in the second event at London. Still, he finished the Challenge ranked ninth overall.

Semenuk is looking forward to competing in Whistler on Aug. 16, and likes what he’s seen of the course.

“I know they’re doing a lot of work on the course, and from what I’ve heard it should be really good and really fun,” he said.