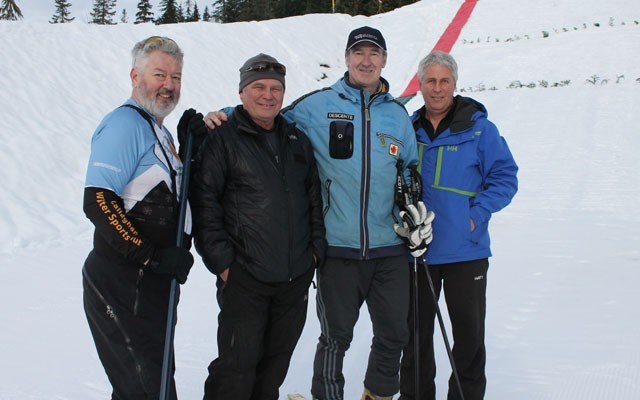 British Columbia's only national ski jumper is taking some major strides toward losing that title.

New 20m and 40m ski jumps are set to officially open at Whistler Olympic Park with a gelandesprung (a German term for ski jumping) learn-to-jump event on Sunday, Jan. 18, and retired ski jumper Tom Thompson is set to lead the charge.

With these jumps set to ease young athletes into the sport and provide a bridge to the larger 106m and 140m jumps, Thompson is giddy when thinking about the possibilities.

"I've been waiting 40 years for this to happen," he said.

Thompson, who represented Canada from 1977 to 1990, has led programs for younger jumpers recently, but without any permanent intermediate jumps, even the most promising locals weren't going to be able to break through to any significant degree. Thompson is quick to say that with this infrastructure, a "half-dozen" kids could have already progressed significantly.

With the chance to create elite athletes, Thompson noted local athletes may compete in Calgary as early as next season.

"The kids could only improve to a certain point and without real ski jumps, they hit a plateau where they can't really improve that much," he said.

"There was nowhere for them to go to," added John Heilig, the park's manager of Nordic sport. "There was no chance they would have a real opportunity to be successful, whereas now they (can be)."

Thompson explained the programs were inconsistently scheduled and the landing area was too short, meaning the better jumpers were penalized, in a sense, by landing on flat ground.

"When you take off your boots and your toes are all black, it's not because your boots are too small," Thompson said.

Thompson feels his ability to emerge as an international-level competitor from the humble old 10m and 30m jumps in Rainbow in the 1970s will help to inform how he approaches coaching here. He admitted he was hoping to be a downhill racer growing up, but those programs were significantly more expensive than ski jumping. Thompson came to love the sport, though, and hopes to pass that along to all who try it out.

The 18-year veteran competitor, who will coach with assistant Brittany Rhoads, emphasized three goals of his coaching style: safety, fun and maintaining attendance.

"I just know the importance of being positive and not losing any kids that come in the program," he said. "It's a big pool of all the other sports and all the new Olympic sports we have. Twenty years ago, there was alpine, there was cross-country and those kids were taken up. Now there are all these other sports — snowboard sports, halfpipe and all that."

Thompson praised the look of the new ski jumps, especially looking back on what he learned on at Rainbow, which could be "sketchy" at times.

"These designs are the best designs in North America for small jumps. These are just awesome, perfect jumps," he said. "At Rainbow, the stopping area was about half of what we have. It was a big bank and if you didn't stop, you were in the creek.

"I know I ended up in the creek a few times. There was a little bit of a lack of safety."

Heilig hopes to regularly see at least 60 participants using the 20m jump, but is hoping for greater use than that.

Before even taking on one of the new jumps, skiers can dip their toes into getting airborne with the new ski play area, which opened in December. The area, located just beside the new junior jumps, has three runs with smaller bumps.

"I would say 70 per cent of the kids are going to be able to be on the 20m this season," Thompson said. "The 20 is as safe as any jump. The 40 is a little different, but these jumps are designed so perfectly."

This Sunday's gelandesprung, running from 1 to 3 p.m., is open to children and adults aged eight to 80 who have intermediate downhill skiing ability. Those who attend must bring properly adjusted alpine or telemark equipment and a certified snow sports helmet. Pre-registration is offered until 4 p.m. on Jan. 17, and costs $15 for those 18 and under and $25 for all others. To book, email bookings@whistlerolympicpark.com or call 604-964-0060 ext. 2434.

The event kicks off the Ski Hoppers learn-to-jump program, which will run from 1 to 3 p.m. every Saturday and Sunday until March 15. Pre-registration is encouraged and is available until the Thursday before the weekend.

For more information on the park's ski-jumping options, visit www.whistlerolympicpark.com.