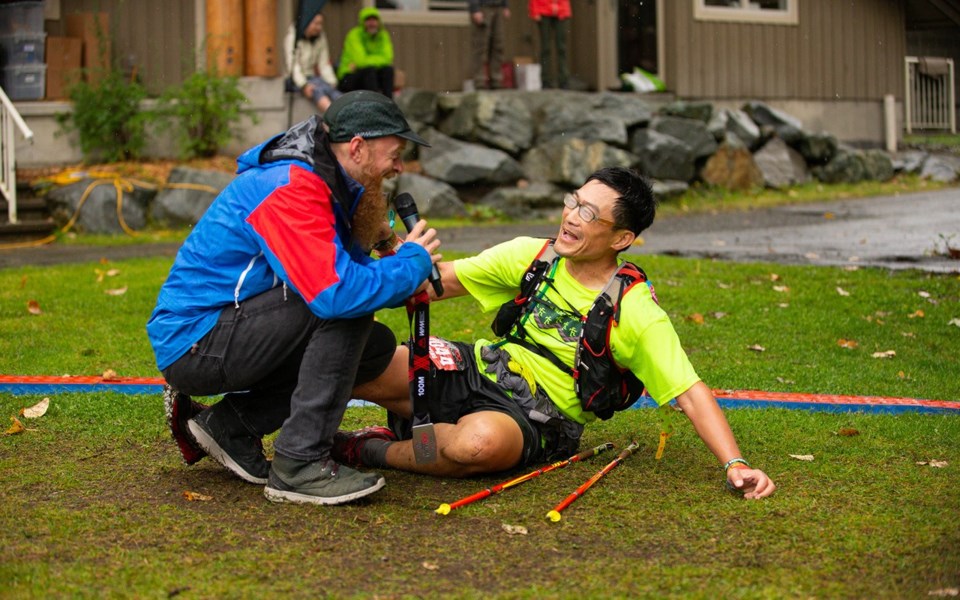 Chihping Fu needed all but three seconds of that time.

The Fremont, Calif. resident crossed the line in 47 hours, 59 minutes and 57 seconds (47:59:57) to narrowly avoid disqualification. Fu has raced several 100-mile races in the past, and tends to take his time to complete them.

The WAM 100-mile course has 9,500 metres of ascent, including ascending Whistler Mountain twice and Blackcomb Mountain once.

After starting out faster than he had hoped at the race's outset, Fu eventually found himself drop more comfortably to the back of the pack or, as he put it, "DFL" or "dead f-ing last." He brought up the rear for more than 36 consecutive hours before he temporarily passed a competitor at an aid station.

"I was pretty happy about that," he said.

Fu described himself as efficient, taking as little time as possible at aid stations in order to keep going. It also applies to life around the races, as he flew into Seattle instead of Vancouver to save some money, and generally sleeps in a car instead of paying for a hotel (though he opted to stay at a Whistler hostel at the last minute).

Fu explained that he would regularly take short naps on course, setting the alarm on his phone for 10 minutes before he would arise and keep going for an hour or two before restarting the cycle.

As the second day progressed, Fu found himself closing in on the cutoffs as he completed sections more slowly than he had budgeted.

"It was pretty close," he said. "[I thought] maybe I won't be able to finish in time, so I was worried about that."

Fu was also delayed by the occasional wrong turn, one in Cheakamus Crossing near the Whistler Athletes' Centre, and one near the end of Day 2 when he was struggling to keep his head in the game.

With the encouragement of some of the sweeps (volunteers trailing the last runners to ensure they're all right), Fu picked up his pace and got back on track.

"All I can do is focus on the next marker and keep moving," he said. "Finally, it hit me that I need to push harder. So instead of walking, I start to run."

And run he did. However, Fu had taken to heart the organizers' mantra of picking up garbage along the course in order to keep the backcountry pristine. Just before the final bend, he ducked into a ditch to grab a couple more pieces of rubbish, and when he came out of the ditch, finally saw the finish line in sight and made it just before the cutoff.

"I could not run anymore. I collapsed," he said. "One second before I crossed the line, I got so emotional. I started to cry."

With Fu's story fresh in their minds, and being a reverse of organizer Gary Robbins' heartbreaking miss by six seconds at the Barkley Marathons, the race announced that the final finisher will receive an award named for Fu in future years.