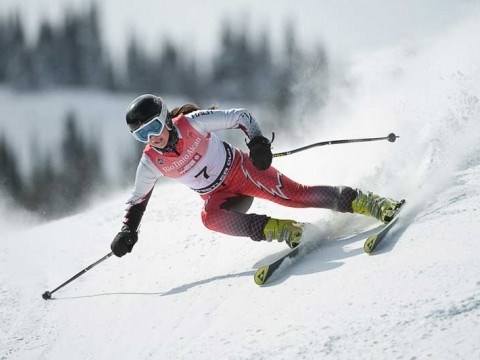 Despite the participation of teams from Italy and Austria this year and some tough competition for the podium, Team Canada defended its overall Rio Tinto Alcan Whistler Cup title last weekend with some breakthrough performances by athletes.

A group of eight skiers was selected to represent Canada this year, while other Canadian athletes represented their provincial teams and clubs.

Each country is allowed to enter a national team with 10 athletes, with a maximum of six K2 skiers and a maximum of four K1s, and no more than four skiers of the same gender in each group. Only results in the top 15 count for points in the Nations Cup standings, ranging from 25 points for a win to just one point for 15 th .

The competition got underway on April 9 with the K1 athletes taking on a kombi course (mixed slalom and giant slalom) on the Dave Murray and the K2 athletes racing a super G on Raven/Ptarmigan.

Mikayla Martin of Squamish, racing for Team Canada and the Whistler Mountain Ski Club, pulled out a silver medal in the women's K1 kombi, finishing between Elisa Fornari of Italy and Mio Arai of Japan.

"It was fun to race it," said Martin. "I know this hill upside down and backwards."

Keegan Sharp of Invermere won the boy's Kombi, edging out Alberto Bengini of Italy and Filip Forejtek of Czech Republic.

The WMSC's Emma King, racing for Team Canada, won the women's super G, just 0.11 ahead of Julia Grosshaupt of Austria. Mikaela Shiffrin of the U.S. took the bronze medal. Alix Wells of Prince George was the only other Canadian to crack the top-15, finishing in seventh place.

"It's the last race of the year and there is no pressure," said King. "I just did what the coaches told me during inspection and I guess it paid off."

Karl Kuus of Ontario earned Team Canada's third medal of the day in the K2 boys' super G, placing third behind Miha Hrobat of Slovenia and Andrea Squassino of Italy.

WMSC skiers in the top-30 include Brodie Seger in 16 th place and Blake Ramsden 17 th out of 105 starters.

The Canadian team had a tougher day on Saturday, with Mikayla Martin winning Canada's only medal in the K1 women's giant slalom. The podium shot was a repeat of the first day with Elisa Fornari of Italy first and Mio Arai of Japan third.

While happy to pick up her second silver medal, Martin would have done a few things differently if given the chance.

"It was a really slow, turn-y course," she said. "I am not upset but I thought I could have done better. I feel like I am going to come back for revenge tomorrow. I need to step it up a little but I think I can do it."

In the K1 men's slalom the top spot went to Alberto Blengini of Italy, followed by Matej Prielozny of Slovakia and Filip Forejtek of Czech Republic. The top Canadian was Matthew Kreutz of the B.C. first team. He finished eighth. Whistler's Riley Seger was ninth and Alexander Cameron 22 nd .

In K2, the men also raced slalom. Jakob Helgi Bjarnason of Iceland took the win, followed by Valentijn Van Der Avoort of the Netherlands and Nik Sterle of Slovenia.

Alex Kreutz was the top Canadian, in fifth place, followed by Martin Grasjic. The top WMSC skier was Blake Ramsden, 10 th , while Brodie Seger was 19 th .

In the K2 women's giant slalom Mikaela Shiffrin of the U.S. picked up her second medal in as many days, winning the race by 1.64 seconds. Petra Vlhova of Slovakia edged out Chiara Mair of Austria by just 0.01 seconds to take the silver. Alix Wells was the top Canadian, in the eighth place, with Roni Remme of Ontario 10 th .

On Sunday the athletes switched with the women racing slalom and the men giant slalom.

Canadians picked up two medals on the final day.

In the K1 women's slalom Mio Arai of Japan picked up her third medal of the Whistler Cup with a gold medal performance, with teammate Narumi Katagiri placing second and Kristyna Pilna of Czech Republic third.

In the men's K1 slalom the top spot went to Filip Forejtek of Czech Republic, followed by Alberto Blengini of Italy and Matej Prielozy of Slovakia.

In the women's K2 slalom Adrienne Poitras of Mont Tremblant picked up a bronze medal behind Austrian skiers Anna Poglitsch and Julia Grosshaupt.

Rae Swette moved up to 10 th and Charley Field was 16 th for the WMSC.

Blake Ramsden of the WMSC tied for sixth, Charlie Renzoni was 27 th .

Canada has now won the overall Nations Cup title three out of the last four years, after not winning it once in the first 14 years of Whistler Cup history.

At the conclusion of the races, organizers handed out the Dave Murray Award and Nancy Greene Award to the top male and female racers from Canada in both K1 and K2. Mikayla Martin was a shoo-in for the Nancy Greene Award, while her WMSC teammate Emma King won for the K2s.