Three Canadian climbers received a mention on the long list of the Piolets d'Or mountaineering awards last month.
Aug 10, 2019 12:00 AM By: Dan Falloon 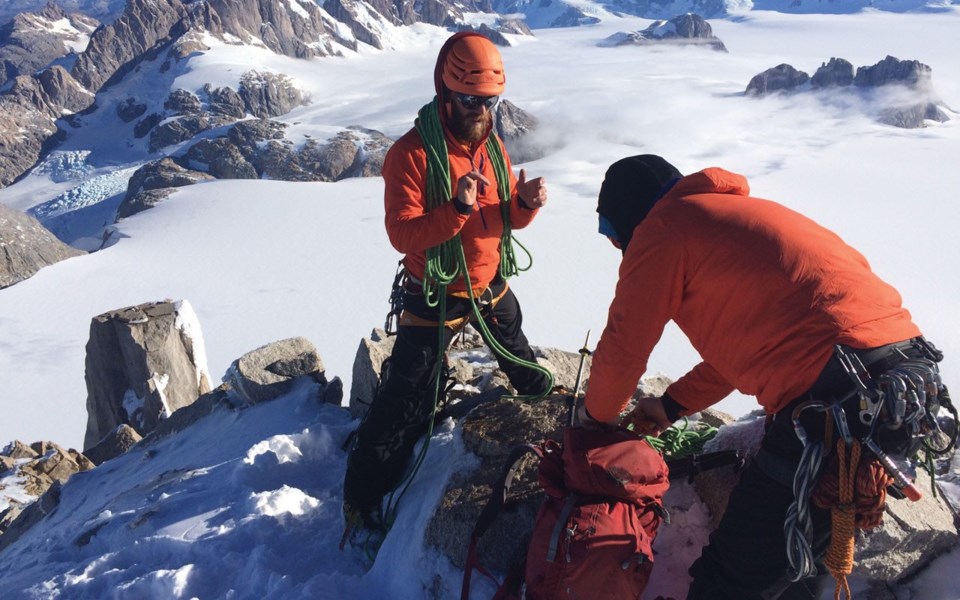 The awards, which are given out at the Ladek Mountain Festival in Poland in September, revealed Max Fisher, Alik Berg and the late Marc-Andre Leclerc as part of the list. In all, 58 "significant and innovative ascents" were recognized.

Fisher, a Vancouver Island resident, was included for his ascent of 2,410-metre Punta Pantagruel in northern Patagonia with Chile's Felipe Cancino and American Willy Oppenheimer in February 2018.

When he looks at the list, he's thrilled to see himself included alongside names such as Slovenia's Luka Lindic.

"It's a surprise, I can tell you that," he said. "It's kind of funny when you go out and do things you really like to do and then you get some recognition for it. It's sometimes hard to believe.

"When you hear Piolets d'Or as a climber or alpinist, it's a big deal."

Fisher worked for 10 years with National Outdoor Leadership School, an American-based school working internationally, which is where he met Cancino. Oppenheimer, meanwhile, he connected with while skiing and climbing in the northwestern United States.

Cancino had photos of a new climb on Punta Pantagruel, and the team was on board after seeing them.

"It was Felipe's idea to go in there. This time, he asked both of us, Willy and I, to go," he said. "We weren't necessarily sold on which aspects we were going to climb until we got down there and looked at it. The east face seemed like it made the most sense, and with our window, we only had a short few days of good weather."

At the top of the 350-m Brisa Sauve (or "soft breeze") peak, the trio thought they might have another day to climb and saw another peak to summit, which they called Cerro Fantasma (or "ghost peak").

"We looked across and we looked at the map and we thought, 'That peak looks sweet.' It's not actually on the map, so we thought we should do our best to put this on the map," Fisher said of the 2,252-m climb. "It looked like it made sense that we could cover the distance, climb the feature and that aspect and get back to camp because it's a bit of a longer day. You walk 15 kilometres there and back."

While it was a great feeling to summit new territory, Fisher said it was also important for helping UBC PhD student Camilo Rada re-map the entire ice fields in the region. However, it can be challenging to set out on the new territory, especially mid-expedition.

"[Maps are] not very accurate in Patagonia. They're maps that the military made," he said. "The glare of the snow on the ice fields creates a big white blotch on the map. They don't know what elevation necessarily is. You just have to go and see, then you can pick and choose as a climber if you're going to explore and see things.

"You don't necessarily know what you need to bring in terms of gear. It can make it a little more logistically challenging. Maybe you're going to bring more than you actually do need.

"But that's just part of the process of exploring things that haven't really been explored before."

For the new Cerro Fantasma climb, conditions were near ideal, Fisher recalled.

"The day was beautiful. There was no wind, which is rare down there. When we got to the base of the face, it looked like fairly moderate terrain, so not too hard," he said. "Because there was so much snow, we had to climb in winter style so it made it a little bit slower.

"The first few pitches were moderate and then we got into some more tricky mixed climbing. Then Felipe led us up to this little chimney onto the ridge. It was just a few more pitches."

Those final few pitches, Fisher explained, were affected by the moist Patagonian air—when it's windy, the moisture sticks to the rocks "like plaster, almost," which can make it difficult to navigate.

Fisher said he has thought about returning to Patagonia, as some other potential climbs caught his eye.

Alik Berg, a Canmore resident, made the list for a climb a little bit closer to home, ascending Mount Temple, just south of Lake Louise, via a new route. Berg, who completed the 3,547-m climb solo in December 2018, has been included in the Piolets d'Or long list before and downplayed his nomination this year.

Berg had long hoped to complete an east-face climb on Mount Temple, but needed low-snow and low-temperature conditions to come together just right.

"I've climbed Mount Temple a bunch over the years," he said. "I hadn't climbed the east face, which is a roadside thing you see driving by all the time. It requires specific conditions, so I'd had my eye on it for a long time.

"The ice doesn't form at that elevation until into December, or late November. It's ideally an early-season route, but it has to be cold enough for those pitches to be formed."

Berg said his ascent was easier than the routes on the north face, especially technically, though he noted that it's still a lot of terrain to cover in one day.

The late Leclerc received two nominations, one for a 2,439-m ascent with the United Kingdom's Tom Livingstone on Mount Slesse and for the 2,106-m ascent of the Mendenhall Tower with American Ryan Johnson. Both died on the descent.