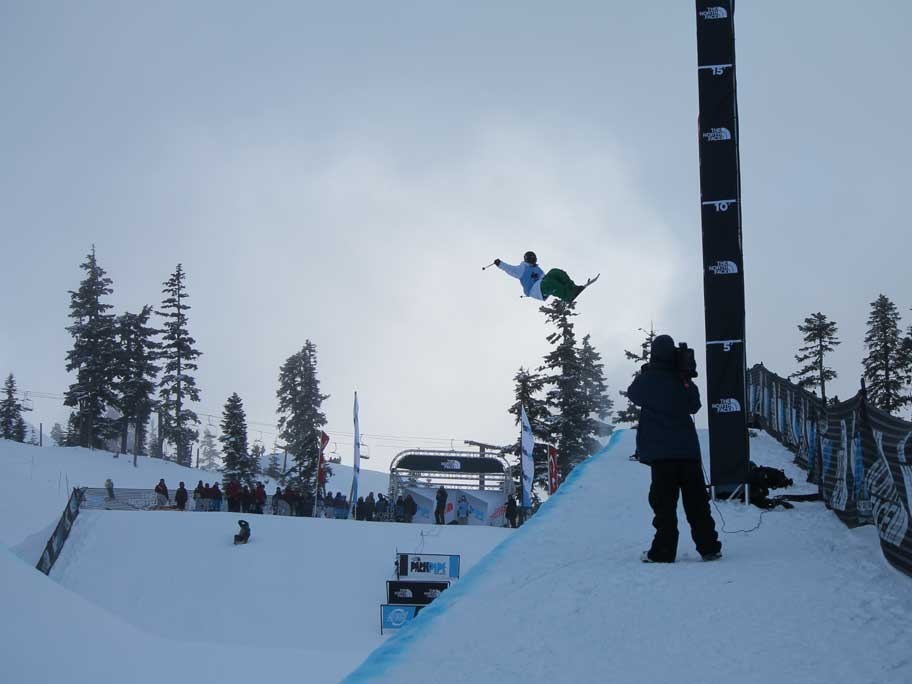 High flyers Some of the top freeskiers in the world changed their travel plans to be in Whistler last weekend for a rescheduled North Face Park and Pipe Open halfpipe event.

Despite the last minute change of venues from Ontario to Whistler, B.C., it was an all-star lineup of athletes in the North Face Park and Pipe Open Series superpipe taking place on Sunday. The men's competition included overall AFP pipe champion Gus Kenworthy, as well as members of the Canadian and U.S. national teams, while World Champion Rosalind Groenewoud and Keltie Hansen of the Canadian women's "A" group were in the women's field.

The athletes had to contend with a lot of weather in the days leading up to Sunday's competition with warm temperatures on Thursday and Friday, snow all day on Saturday and cold temperature for the finals on Sunday. As a result some of the athletes held back on competing with their biggest or newest tricks, saving those for this weekend's Dew Tour event and the X Games at the end of the month.

Kenworthy had the biggest and cleanest first run of the day to post the high score of 88.2. Other athletes tried to top him in the second run, but almost all of the athletes crashed or had miscues the second time around, like missed grabs or issues with landings that stole all their momentum. In the end Kenworthy's first run would stand until the end.

"I was a little scared to do a double (inverted trick) in the pipe because it was a little icy and stuff like that, but I did a couple of corked 1080s and rode switch, and went big and had good grabs and it worked out," he said.

Kenworthy said he made it a point to come to Whistler and do this event.

"It's an AFP gold event which means the only events that rank higher throughout the year are X Games, Euro X Games and Dew Tour, so to have another event that's in the same bracket is awesome. The points are super important to me, I'm trying to win the overall (AFP tour title) again. And there's good prize money and a good course — and it's awesome to keep competing between events."

Kenworthy also said he never misses a chance to compete in Whistler. "I love the mountains, the village, the nightlife — it's my favourite place to come and compete."

More impressive than the win was the fact that he did it without any training runs. He broke his binding that morning, and had to head down the mountain to replace it. By the time he was back at the pipe the contest was ready to start.

In second place was Calgary's Kris Atkinson, an up and coming rider who is not currently with the national team, but made a strong case for his inclusion. He also earned the last remaining spot in X Games.

"The X Games has always been a dream for me, ever since I was a little kid," he said. "I can't believe I'm finally going to be there."

Canada's Mike Riddle got bumped from the podium, but wasn't concerned. He said his own run was subdued because of the kind of week it's been with the Jan.10 critical injury to teammate Sarah Burke, and he was only using the event to warm up for Dew Tour and X Games.

"It was good to kind of take our mind off Sarah and focus on a competition," he said. "We were here practicing with an airbag and trying new tricks, and the contest came up. Most of us are focused on X Games, but it was good to have a local event to tune up our runs a bit."

Matt Margetts placed fifth on the day, which also happened to be his birthday. It was also a chance at redemption after he crashed on the deck at Whistler during the AFP World Championships, breaking some ribs. Noah Bowman also qualified for the finals and placed 11th overall.

On the women's side, Canada's Rosaline Groenewoud said she struggled a little with landings and getting air lower in the pipe, but it was still more than good enough to finish first by four points with an 88.2. American Maddie Bowman had some good air up top and some switch tricks, and finished her day with an 84.6. Keltie Hansen, who won the AFP World Championships in Whistler in April 2011, was third with an 82.0.

Groenewoud was satisfied with her day.

"It wasn't the cleanest run of my career but felt nice to put down my tricks," she said. "We came to support Whistler as much as we can, and felt good to put down a run that was good enough to win."

Groenewoud has been working on some new tricks that she hopes to bring out this season, but with the injury to Burke and the weather surrounding the contest she decided to stick with her stock run.

"It's been a bit of a challenge to get in good training with the adverse conditions, but that's our sport," she said. "We're used to competing in blizzards and rain and on sheets of ice and in slushy pipes. It ended up being a pretty nice day, and we got some blue sky."

Other Canadians in the running include Megan Gunning, who is coming back from an injury and placed fourth; Dara Howell in fifth, Kendall Deighan in eighth and Jackie Atkinson in 10th.

The contest took place at a time when the sport of ski halfpipe is in the limelight. In April, the International Olympic Committee voted to include the sport on the schedule for the 2014 Winter Games in Sochi. However, the latest headlines have been devoted to the recent injury to Sarah Burke, who was in Utah for a sponsor event when she fell in the halfpipe and sustained a serious head injury. She underwent brain surgery two days later to repair an artery, and was still in a medically induced coma on Monday morning.

Groenewoud said it was an emotional week, which is one of the reasons she wanted to compete.

"I always feel best when I'm competing, I feel better than I feel doing almost anything else," she said. "You have just one task to accomplish and the whole world kind of shuts off for a minute. That's the main reason I competed, to get my mind off of everything that's going on and focus on having a clean run without a lot of distraction."

The sport also received a lot of negative attention, with some media suggesting that the sport may be too dangerous. Groenewoud doesn't think so.

"I think that what most people don't realize is that the most dangerous thing that any of us do each day is drive to the mountain. Our sport is not nearly as dangerous as driving a car in winter conditions and it's a hell of a lot more fun," she said.

"We all realize the risk we take as pro athletes, but we wouldn't do it if there wasn't a reason. It's the best feeling in the world, and none of us are going to give it up despite the negative attention."

Like most athletes, Kenworthy was confident that Burke would recover, and said that the injury was motivating for the skiers.

"It's hard to see an athlete go through something like that, but I know Sarah is so strong and she's going to pull through. This injury seems huge right now but in the grand scheme of things I think she'll come through and be unscathed by it. There's a ton of the support in the industry."

Kenworthy said the negative publicity wouldn't matter as the sport becomes more mainstream through events like the X Games and Olympics.

"People always think our sport is racing or moguls or aerials or wannabe snowboarders or whatever ... but I think it is slowly getting broadcast to a wider audience, and eventually will be mainstream — and people will know the sport."