Chew to be inducted into Canadian Ski Hall of Fame 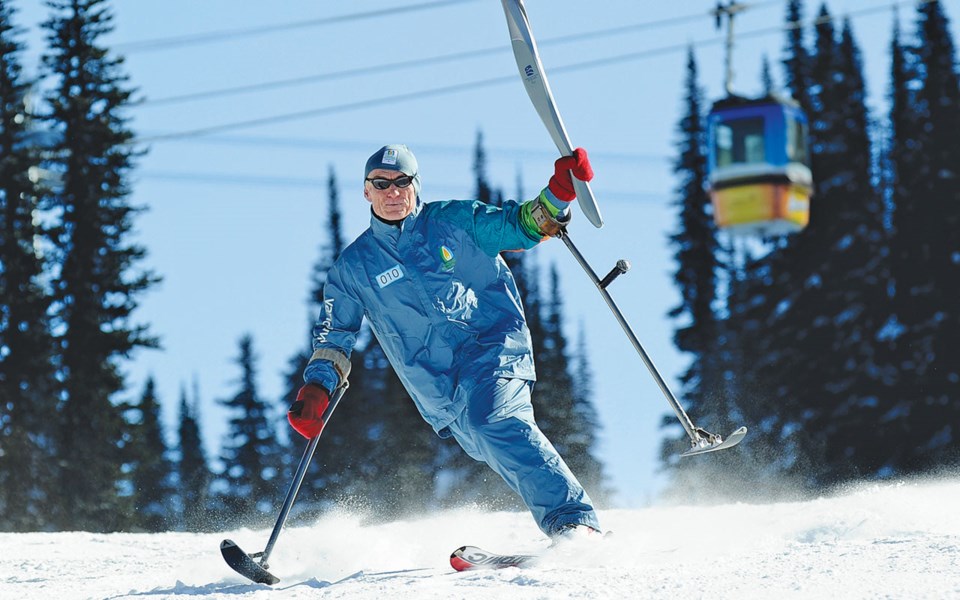 CALL TO THE HALL Phil Chew, shown here carrying the Paralympic torch in 2010, will be inducted into the Canadian Ski Hall of Fame. File photo by Bonny Makarewicz

Longtime Whistler adaptive ski coach Phil Chew will be recognized for more than two decades of work with B.C.’s athletes.

Chew recently received word that he’ll be inducted into the Canadian Ski Hall of Fame in Collingwood, Ont.

He got an inkling about his nomination about a year ago, then filled out some forms for the Hall earlier this year, and officially received the news in a letter in late September.

Though the Canadian Ski Hall of Fame has not yet revealed its 2020 inductees publicly, board chair Stephen Finestone confirmed that Chew would be going in. However, because of COVID-19, the ceremony for its 2019 inductees, including 2010 Olympic gold medallist Ashleigh McIvor-DeMerit and Blackcomb Mountain legend Lorne McFadgen, has still not taken place.

Before 23 years as a provincial coach, Chew was on the national team for a decade, competing at the Paralympics in 1984, 1988 and 1992. That experience as an athlete, he said, made him want to keep in the sport even after his own competitions were over.

“I’d been there for 10 years. I knew what it was all about,” he said. “With sports, especially disabled sports, people do it, they get really good at it, and then they do another job and they wouldn’t do much with it. I thought I could make it better.”

Ultimately, 24 of Chew’s athletes graduated onto the national ski team. But it was finding the athletes for the provincial level that proved challenging, since as an adaptive system, there wasn’t the same chain as in other programs with local clubs.

“You’ve got to find the athletes and try to teach them how to ski,” he said. “If they have some athletic ability, then you can zero in on ski racing.”

As part of the Building Our Best program, athletes worked on skiing fundamentals, raced a loosely set giant slalom, watched videos and had an inspirational talk.

“We could see what kind of talent there was around the province, then from there, we’d invite them to a training camp and if they had some athletic ability, then we’d start training them,” Chew said. “There was no other system happening like that in Canada.”

Once athletes were part of the program, Chew would take them to NorAm Cup races and work get their International Paralympic Committee points totals to an acceptable level. If they achieved that, they were soon picked up for the national team.

Chew saw an uptick in interest after Olympics and Paralympics were awarded to Vancouver and Whistler in 2003, and several athletes he coached competed on the sport’s largest stage in their own backyard.

“That was the coolest thing, to see guys that I’d coached,” he said.

One of those athletes was Matt Hallat, now Alpine Canada’s para-Alpine high performance director, who nominated Chew for the Hall.

“Personally, I’ve known Phil for 25 years or so, and seen the impacts that he had with Paralympic sport and with skiing in British Columbia and at a national level,” he said. “It’s exciting when someone like that can be recognized.”

Hallat credited Chew for making him and his family aware of adaptive sport, and helped set him on the path for what his life would become.

“Phil was the first person who approached me when I entered my very first ski race and made me and my family aware of what Paralympic sport was and that it even existed,” he said. “It can’t really be overstated how that lit the fire a little bit.

“He kickstarted what became, and what has been, my career since then.”

Chew recalled: “I saw him and said ‘Holy cow, this kid could be a really good skier,’” adding that he was proud to see Hallat build a career in the sport even after retiring as an athlete.

Hallat, who received coaching from Chew for about five years, said Chew was an excellent mentor for him.

“[He has] an unwavering passion for skiing and ski racing. Anyone who’s met Phil knows that he remains to this day a dedicated athlete himself and the energy that he has is contagious,” he said.

Chew was so dedicated to the athletes that he also organized the Westside Wheel-Up bike race for 16 years, with proceeds going to multiple causes, including the team.

Chew lauded longtime assistants Dallas Smith and Jason Fink, as well as Whistler Adaptive Sports Program founder Sian Blyth for their help and support throughout his coaching career. He also credited Dave Murray for helping him score a sponsorship with Atomic when he was starting out, noting he still has that initial set of skis.