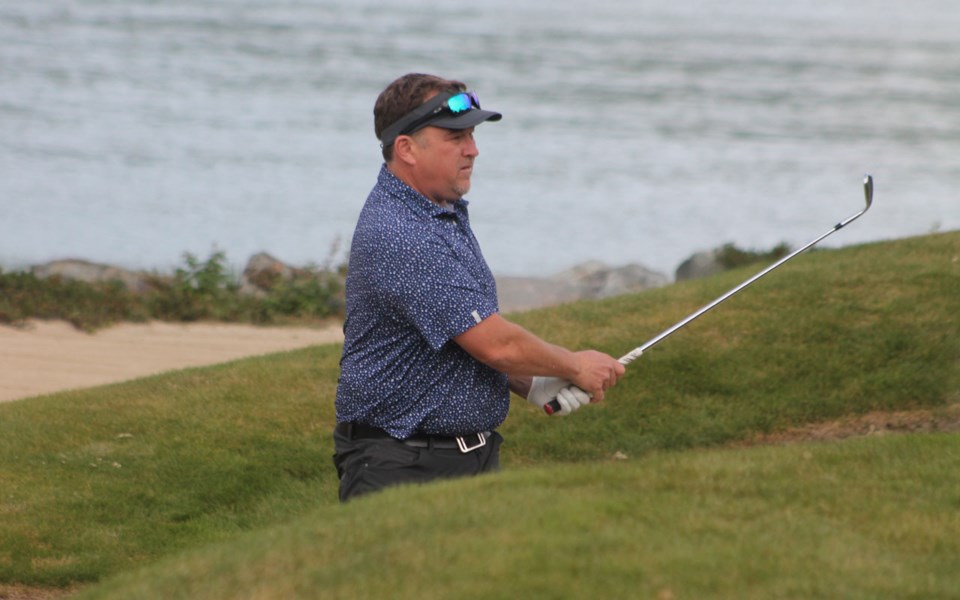 Andrew Smart at the 2020 Srixon/Cleveland Golf/XXIO PGA of BC Club Professional Championship. Photo by Eric MacKenzie/PGA of BC

It took three extra holes, but Brad Clapp eventually came away with the 2020 Srixon/Cleveland Golf/XXIO PGA of BC Club Professional Championship victory at Nicklaus North Golf Course on Sept. 22.

Clapp, who has served as Cultus Lake Golf Club’s director of golf for the past two summers, was even with Point Grey Golf and Country Club’s David Zibrik after 36 holes, with each posting a five-under-par 137. Clapp, a tournament winner on the Mackenzie Tour, eventually took the victory, edging out Zibrik on the third playoff hole.

Clapp and Zibrik played alongside each other both days, and the champion praised the runner-up.

“He played fantastic for two days as well. I was just lucky enough that one putt dropped a little bit sooner than his,” Clapp said. “It was a good time, but it was just patience and making sure that I didn’t get ahead of myself.”

After the first round of play on Sept. 21, Clapp trailed leader Philip Jonas by a single stroke, but Jonas suffered a five-over-par 76 in Round 2 to slip into a tie for seventh. Even though Clapp’s Round 2 score was five strokes higher than Round 1, his two-day score was good enough to qualify for the playoff. Zibrik’s road, meanwhile, was steadier, as he put up a three-under 68 for Round 1 and a two-under 69 for Round 2.

Clapp credited his short game for putting him in contention, noting his 25-footer for eagle on No. 13 after notching birdies on 10 and 11, helping him post a five-under for the final nine holes of the first round.

“I made a lot of putts. My ball-striking hasn’t really been great all year. I don’t feel like I’m in full control of my golf ball, but I’m just playing smart enough and being patient enough,” he said. “I think in the first round, I just made more putts.”

Clapp was thrilled to play Nicklaus North, adding that it aligns well to his style.

“It’s good to get out and play. It’s a destination that all of us pros want to come to. It’s pretty easy to circle this event on our schedules and make the trip up,” he said. “It was in awesome shape. It’s a treat to play and I love that place.”

Clapp was also glad to take a couple of days to get out and play a few holes, as during the pandemic, he’s had less time to play because the course was busier but there was less staff. Clapp said he hadn’t so much as touched a club for three weeks before heading up to Whistler.

“Everyone’s been so busy. Golf has seen a huge boom during COVID as people have a little bit more free time and wanted to get outside,” he said. “It’s been a crazy, hectic year and it’s a good problem to have. We love facilitating new golfers. We love getting busier.”

On the local side, Nicklaus North’s Andrew Smart put up the second-best Round 2 score with a two-under 69, five strokes improved from his three-over 74 to kick things off. Smart finished tied for ninth.

“I had a good couple days. I rolled down the greens a little bit the first day but made up for it the second day,” he said. “The golf course was in exceptional shape.”

The two other locals also finished in the top half of the 45-player field as Padraic O’Rourke of the Fairmont Chateau Whistler tied for 13th at three-over and Alan Kristmanson of Whistler Golf Club tied for 21st at 10-over.

“I’ve got a few more reps than a lot of the other players, but I can’t tell you that there’s been much preparation in the last 120 days,” said Smart, who tries to play once a week. “It’s been a busy summer with lots of different responsibilities, so playing golf has not been my No. 1 priority.”

Smart credited superintendent Aaron Mansbridge for his work preparing the course, overcoming the smoky conditions leading into the tournament to ensure it was pristine.

As well, Smart was glad with how the tournament itself went off.

“We try to support our Professional Golfers Association every couple of years. It’s great to have these guys up to play and showcase the facility and showcase Whistler,” he said.

The annual Whistler Turkey Trot, held by the organizers of the Whistler Half Marathon, will return for a third year on Oct. 11 at Lost Lake Park.

However, there will be some alterations during the COVID-19 pandemic.

Registration will be limited to 50 people, while there will be interval starts for participants. Though a 10-kilometre run has been on offer in years past, only the five-km distance will be on tap this year to limit the event’s footprint. There will be no gathering at the end of the event.

All of the $15 registration fee will be donated to the Whistler Food Bank.