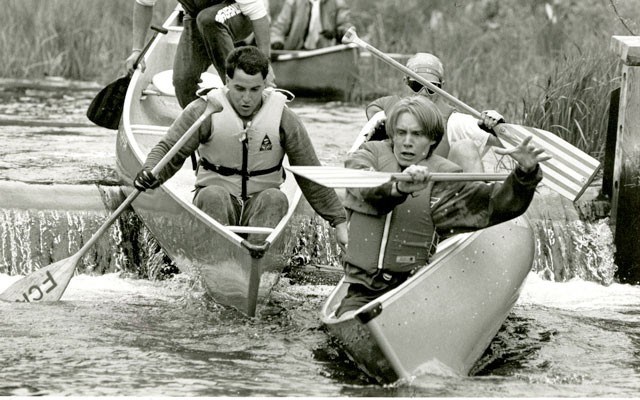 it's back Paddlers navigate a tricky section of the River of Golden Dreams during The Great Snow-Earth-Water Race in 1990. The event has been revived for the inaugural GO Fest. file photo

A quintessential Whistler event, The Great Snow-Earth-Water Race disappeared from the resort some two decades ago.

Beginning in 1975, this team relay was an annual spring tradition that saw competitors ski, bike, run and canoe their way to the finish line. Bringing together several of Whistler's best recreational offerings in one great event that garnered attention from around the world.

"At the end of the season a lot of us skiers would just sit back, watch the Gelandesprung jump competition and drink beer," said Walhovd. "I wanted to get something going that everyone could get involved with."

The event remained a resort staple for more than 15 years, catching on with locals thanks to its fun-first vibe, loose rules and its mash-up of multiple sports, years before modern triathlons had caught on in Canada.

But the last iteration of the race took place in the early 1990s, eventually dying out when insurance costs and other issues made it too difficult for the event to continue.

The revived Great Snow-Earth-Water Race, which happens on Sunday, May 18, will be the signature sporting event of this weekend's inaugural Great Outdoors Festival, putting a new twist on the old classic.

"It's going to be an exciting throwback to the old days of Whistler," festival organizer Darren Kinnaird told the Insider. "The original races were before my time, but I'm excited to see the community come together in that fun-loving, grassroots way that Whistler is famous for."

Co-ed teams of five to seven racers will be put to the test over six unique stages, stretching from the subalpine down to the valley, with team members handing off a timing chip as the baton.

The second stage is a downhill ski or snowboard course down Orange Peel, Pony Trail, Hwy 86 and Expressway until racers reach the snow line. From there, they'll have to run to meet their teammate on B-Line, where the downhill biking leg begins.

Downhill riders head out on B-Line and travel a handful of Whistler Mountain Bike Park trails, finishing in Skier's Plaza via Monkey Hands.

Stage 4 is a running leg, leaving from the Village Stroll towards the Whistler Golf Club, along the Valley Trail all the way around the course and onwards to Rainbow Park. Once there, runners will tag up with two teammates in a canoe, who will paddle down the River of Golden Dreams to Green Lake.

The relay anchors will get back on mountain bikes, following a route made up of Lost Lake cross-country trails and back to the finish at Skier's Plaza.

The Great Snow-Earth-Water Race is just one of many sporting events and competitions on offer during the long weekend. Visit www.greatoutdoorsfest.com for registration links and full details on all festival events, unless otherwise noted.

The schedule kicks off Friday evening with the GO Enduro, taking place in the Whistler Mountain Bike Park on the facility's opening day.

There will be $2,000 in cash prizes that will be spread amongst the top-three finishers in the men's and women's open races. Categories for men's and women's juniors, as well as men's master racers, will also be offered.

With Pemberton also hosting a stop on the Sea to Sky Enduro Series the following day, expect many of the region's top riders to come out and vie for the top spots in Friday's three-stage race.

Experience a trail run at dusk with family and friends to make your Saturday night special. The AlpenGlow Fun Run, open to runners and walkers of all ages, leaves from Whistler Village at 8 p.m. and will follow an illuminated 6.5-kilometre course around Lost Lake.

Local DJ Foxy Moron will broadcast beats for the entire run, while participants can stop at Lululemon cheer stations along the way to rest and rehydrate or check out interactive displays. The Boom Booms will welcome runners back to the village with a free concert starting at 9 p.m.

Register early, as the price goes up after the first 500 individuals sign up.

Far from your average paddling race, co-ed squads of six people will be competing against each other in five different events to determine the top team.

A flat-water slalom on Green Lake, a two-kilometre mass start race down Green River and another time trial on the river make up the timed portion of the challenge, but two other events give teams a chance to earn a time bonus. The Sumo Wrestling stage will pit the smallest members of each team against each other on top of an overturned raft, while the Raft Flip will require each team to get their vessel back in the upright position and load back in.

All teams must have at least two members of each gender, and all participants must be 10 or older. Each team is assigned a guide and will be provided with all of the necessary gear and equipment.

Whistler's excellent disc golf course will welcome players of all ability levels for this two-round, 44-hole tournament, taking place Saturday morning and afternoon. The Whistler Disc Golf Club is hosting this event, which is sanctioned by the Professional Disc Golf Association.

The first round of the tournament gets underway with a shotgun start following a player meeting at 9:30 a.m. at the first hole. Nearly half of the entry fees will be funneled into the prize pool, which will start with $500 in the pot.

Fewer than 100 spots in the tournament are available, and lunch is included with the registration fee.

This two-day tourney kicks off on Saturday and will crown a champion co-ed team on Sunday. All the action takes place on the Myrtle Philip Community School fields.

Registration for the event has closed, but tournament details are posted at www.whistler5on5.com.

The Whistler Sailing Association will host this unique hybrid race of skiing and sailing all day Saturday.

The ski portion is optional, but will consist of a scavenger hunt on Blackcomb Mountain beginning in the morning. The sailing leg on Alta Lake gets underway at 1 p.m. with three races scheduled.

Find a partner for this event, as the race will be contested by teams of two. The minimum age to participate is eight, though competitors under 13 must pair up with an adult.

Use of a sailboat is included in the registration fee. Prizes will go to the top three boats overall, the top parent-child team and the top combined ski-sail score.

The ultimate celebration of spring skiing takes over Blackcomb once again. Head down to the slush pit at the Glacier Creek Lodge to take in all the wet and wild action, which kicks off at 12:30 p.m.

If you'd like to try your hand at making it over the pond, registration will be taking place on site. Skill, style and a wacky outfit are all prerequisites for anyone hoping to take home an award.

The top participants will be honoured at the Village Square stage at 3:30 p.m., followed by après at Citta'.

Erin Anderson, and her team from White Gold Yoga, will host this gathering at the Squamish Lil'wat Cultural Centre. From 3 to 5 p.m., the venue will transform into a massive yoga studio, complete with music, prizes and surprises.

The GO Yoga Jam will be held in support of the Africa Yoga Project, which aims to empower African youth by introducing them to the activity.

The final sporting event of the festival will feature top-level kayak racers battling it out in two different formats on Monday afternoon.

It all starts with a downriver race beginning at 1:15 p.m., a one-run time trial down the Cheakamus River that will take approximately 10 minutes to complete.

The top finishers in the downriver race will advance to the King of the River elimination tournament that will close out the event. Kayakers will paddle head-to-head on a 150-metre section of difficult rapids near the House Rock. First to the finish line moves on.

All competitors must be at least 18 years old and be a minimum Class 4 kayaker.

—with files from Feet Banks