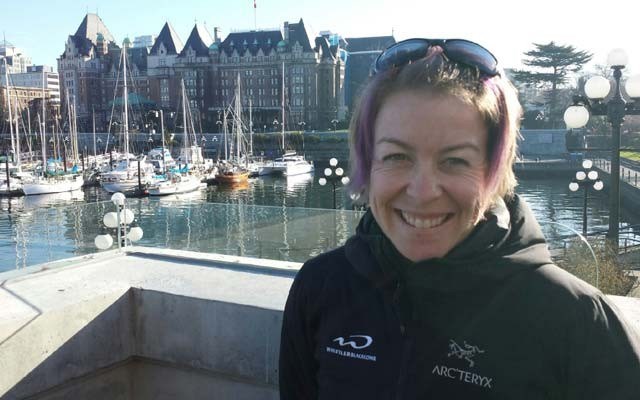 If a major sports event was held in Whistler over the last several years, Christine Cogger likely had some role in it.

The Pemberton resident said in an interview on Oct. 31 that she would be taking over the role of race director for Subaru Ironman Canada from Evan Taylor.

"I have some pretty big shoes to fill. Evan was a great race director for the time we had him with us," she said. "He taught me a lot and he was a great mentor, so I'm pretty excited to step up and try to fill those shoes."

Cogger also served in roles with the 2010 Winter Olympic Games and the FIBT World Cup stop at the Whistler Sliding Centre in November 2010.

She has been with Ironman since 2013 and has familiarity with key staff members, many of whom are set to help with the 2017 event, the final one confirmed for Whistler as part of a five-year agreement that took effect in 2013.

"Luckily, we have a lot of returning staff and I have great support around me. I think the groundwork has been laid to do a good event, so I think my job is just to try to maintain the relationships and make sure that everybody has a great experience coming to Whistler," she said.

Acknowledging that some frustrations have arisen with road closures and other byproducts of holding a race of this scope, Cogger said she would listen to those who have concerns about the way the race is run.

"I think it's really important to maintain good communication with everybody in both Whistler and Pemberton, to foster really good relationships with all the parties that are involved, anybody who's affected by the race, all the athletes who come to town. It's really important to me that everybody has a great experience and by that I mean not just the athletes but people who live in Whistler, people who volunteer for the event, people who live in Pemberton. I don't want to alienate everybody," she said. "I want everyone to have a voice and it's my job to listen to those voices."

Cogger will also investigate what can be done to prevent bear-human conflicts during the race. In 2015, a sow and three cubs were tranquilized and relocated while a cub died during this year's race after being suffocated by a tranquilized sow.

"This is all very, very new so it's going to take some time to dig in and talk to some people, work with conservation (the Conservation Officer Service) and the muni (Resort Municipality of Whistler) to figure out what's best for everyone. I don't want to get ahead of myself and say that I have a solution when I haven't really had the chance to educate myself on the situation," she said.

After just over 1,400 people signed up for the full-distance race and roughly 500 registered for the first year of the half-distance option, Cogger hopes to boost those numbers for the 2017 event.

"It would be great if we got more people to come to Whistler to experience what we can offer as a race venue. I want to continue to see our volunteer numbers grow. We have had tremendous feedback on how great our volunteers are and it's a pretty great pat on the back for our community and I'd like to see that continue," she said. "I just need to really dig in and get my hands dirty and figure it out."

Taylor, who worked for Ironman for four years, did not respond to requests for an interview by deadline. Cogger, who has been travelling and hasn't seen Taylor in person since the transition was announced, said she anticipates he'll be around to support her as much as possible.