Come watch and be amazed 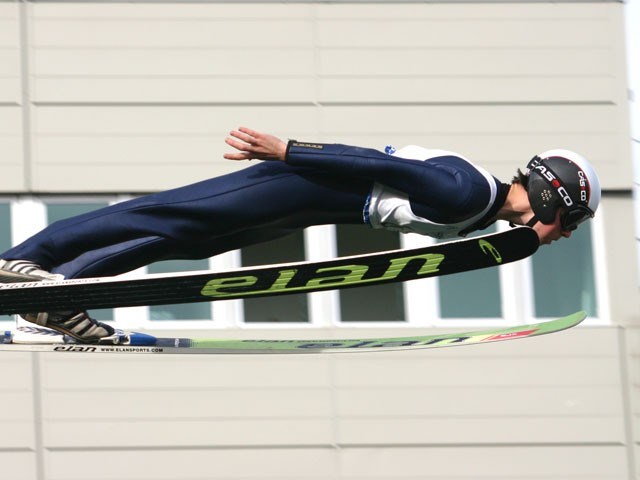 First Tracks Greg Baxter is one of a new generations of Calgary ski jumpers looking to make an impact in 2010. This year he wants to be the first skier off the new jumps in the Callaghan Nordic Centre.

“I just can’t wait to see some snow on the jumps and be able to finally jump off them,” he said.

“Since 1995 Calgary has had the only ski jumps in Canada so having these new jumps will just be amazing. To be able to train on brand new hills at home, it’s something that I have never been able to do since I started ski jump training.”

Baxter, 16, was in Squamish last week to raise awareness about the sport of ski jumping as the Callaghan venue gets ready to host its first events this winter.

Indeed Baxter dreams of being the first jumper to fly off the jumps as the team gets ready to practice at the venue ahead of the January North American Junior and Canadian championships.

He also dreams of achieving podium success at the 2010 Games.

Baxter already fulfilled a life-long goal of competing at the Olympics by representing Canada at the 2006 Winter Games in Torino.

“It was probably one of the most amazing experiences of my life,” he said. “It was the first time a Canadian has represented Canada for ski jumping since 1992.

“I didn’t jump as well as I had hoped but it is still one of the best memories of my life for jumping.”

Baxter hopes British Columbians come out in droves to vicariously experience ski jumping in the Callaghan.

“Ski jumping is an amazing sport,” he said. “It is not like anything else you will ever see. To see somebody fly through the air going 90 kilometres an hour is incredible.

“It is such a unique and original sport it is something people should come and see at least once.”

And with the sport being somewhat new to spectators in Canada it will be possible to get very close to the venues. In Europe they routinely have tens of thousands of spectators at competitions.

Baxter, and his teammate Stefan Read, 20, are firmly focused on getting results leading up to the Games. Baxter placed 16 th twice in the 2007 Summer Grand Prix circuit in Japan. He hopes improved results will lead to more funding.

“I definitely think that if my team is able to get some good results that will help the funding situation,” he said.

Right now the national team gets money from Sport Canada and a committed cadre of volunteer parents who fundraise to help pay for jumpers to travel to the U.S. and Europe.

Ski Jumping Canada chairman Brent Morrice is also hoping that the achievements of the team will be recognized and some more funding will come their way.

The sport gets no funding from the Own the Podium program, which was set up to help achieve podium results at the 2010 Games.

“I would love nothing better than in 2010 to see one of our kids top-10 out there, making Canadians proud that we not only built those jumps as Canadian taxpayers but we developed athletes to jump off them and compete on the world stage,” said Morrice.

Morrice is also looking forward to the day that women ski jumpers can compete at the Olympics. Two of Canada’s female competitors are ranked in the top 10 in the world.

The International Olympic Committee decided earlier this year that the sport was not mature enough to join the Games.

Morrice is hopeful that the new jumps in the Callaghan, a K90 and a K120, will help start a new club so that young athletes will be drawn to the sport.

To accomplish that though, he said, some training jumps need to be built at the venue, which will operate only seasonally.

“It is very difficult to develop a ski jumpers program if you don’t have year round jumps,” said Morrice. “But if we can develop the interest in the Callaghan Valley we can look into building some smaller ski jumping hills so that we can get a younger club going out in the Whistler area.”

Baxter would love to have the chance to train more at home so he can be closer to friends and family, who love to come and watch him compete. Indeed, when Baxter first started ski jumping his dad took up the sport with him.

“He didn’t really get very far just because he is older, he was about 40,” said Baxter of his father. “It was kind of crazy, so he is used to the sport and he knows it quite well.

Asked why he decided to take up ski jumping after experiencing multi-sport camps at Calgary Olympic Park Baxter replied: “It was either biathlon or ski jumping and my mom didn’t want me running around with a gun.”