Cramming for the Test 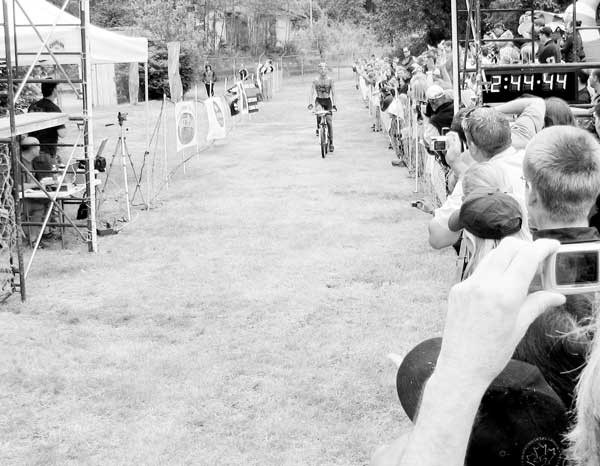 The stage is set for what promises to be another uplifting performance of the Test of Metal, featuring the return of the trials competition and an expanded program for young riders.

The show got underway this past Saturday with the first Pre-Test event, a new race that was introduced after the initial race sold out all 800 spots in a record 48 minutes on New Year’s Day. More than 100 riders took part, making up to nine laps of a 6 km course in Brackendale. The winners in all of the adult age categories received spots in the Test of Metal this Saturday, while the second place finishers got entries in the Gearjammer on July 15.

The main event is the North Shore Credit Union (NSCU) Test of Metal Saturday, June 16, with the field of more than 800 riders hitting the trails at 11 a.m. and starting and finishing at Brennan Park. The fastest riders will be less than three hours, and most finishers will cross the line in under five hours. There are two cut-offs on the race course to weed out the slower riders.

“While lots has stayed the same, some things have changed this year,” said race director Cliff Miller.

For one thing, there are 10 additional rider primes on course that won’t necessarily go to the fastest riders. Ten small anvils are hidden at different prime locations along the course that can be exchanged at the finish line for a guaranteed entry into the 2008 Test of Metal.

The course itself has also seen a few changes this year. The Powerhouse Plunge was upgraded by an International Mountain Bicycling Association crew earlier in the season, and the Far Side trail has been reopened in Crumpit Woods. Well over half of the 67 km race is now on singletrack, with new sections of trail being added every year.

This year there will also be 10 ambassadors on course to help riders with mechanical assistance, food and encouragement. The ambassadors are all former riders with more than a 100 years of combined experience with the Test of Metal.

It’s a huge production, requiring a huge number of volunteers.

“Of course, we still have the 300-plus vollees who, like Whistler’s famed Weasel Workers, rate among the best group of vollees in the world,” said Miller.

The race finishes at the annual Pacifc Northwest Barbecue Association’s Best Race in B.C. cook-off, and the after-party will once again be held at the Howe Sound Brewing Company.

There are several other events taking place around the Test of Metal weekend. The annual Squamish Mini Metal for kids aged 3 to 10, takes place on Sunday at 10 a.m. at the Squamish Station Mall. Parents are welcome to bring their kids to this fun event where everyone gets a ribbon.

The annual Rockstar Invitation Downhill takes place on Sunday at 2 p.m., following a course that starts on Cougar Ridge and descends some of Squamish’s most challenging singletrack. The race gets underway at 2 p.m. Spectators can get the best view of the action by walking up Endo from the bridge at the end of Raven’s Plateau, but are asked to be in place well before 2 p.m.

For more information on the race, visit www.testofmetal.com.