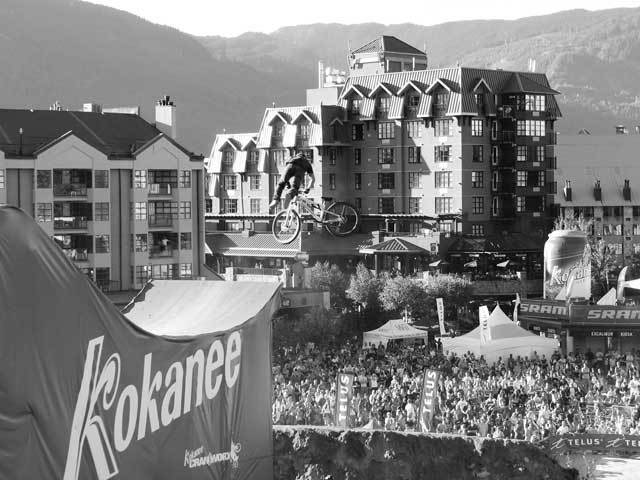 Crowd Pleaser Thousands turned out in person to watch Crankworx events this past summer, while others watched online

The final numbers from the 2008 Crankworx freeride mountain bike festival were released last week, underlining the value of the nine-day festival to Whistler.

According to numbers released by Whistler-Blackcomb, there were a record 14,000 Whistler Mountain Bike Park visits over the festival’s nine days, as well as the largest crowd ever recorded in Whistler, 20,000 spectators, for the Monster Energy Slopestyle. The festival also had a global impact this year with 825,000 people tuning in at www.crankworx.com and www.Go211.com to view videos online.

As well, more than 150 media attended, representing the top magazines and websites in the mountain bike industry.

The list of athletes was also the best of any event to date, boosted by $130,000 in prize money and the participation of sponsors. As well, the industry expo sold out, with 70 displays and booths in the village and on Lot 1.

The event is co-organized by Whistler-Blackcomb, the Resort Municipality of Whistler, and Tourism Whistler.

Tourism Whistler reported the most room nights booked for any nine-day stretch of the summer were during Crankworx. Some retailers and restaurants are also reporting record revenue for any time of the year.

This was the fifth year for Crankworx in its current incarnation, although Whistler has held summer mountain bike festivals in the past. This was also the first time that the event has been held in August, switching dates to accommodate World Cup downhill races.

Crankworx manager Jeremy Roche was pleased with the response to this year’s event.

“Looking at the numbers, we’re seeing tremendous growth in this event and we’re encouraged where we’re at by the fifth year of Crankworx,” he said.

“Our success is based on innovation, and each year we’ve been looking to create bigger and better events. We definitely don’t intend to take the growth for granted, and plan to continue with our culture of innovation for Kokanee Crankworx and work to create an even more exciting event for 2009. Teams are already in place working and planning for next year’s event.”

Roche says Crankworx will always be a work in progress that will always be a little different, but there are some core components of the festival that they will change for next year. One is the athlete experience, drawing an even higher calibre of athletes and providing more service and assistance to athletes to keep them coming back.

Another improvement is how the events are presented to spectators, as well as to people that are tuning in to events over the Internet.

“We’re really trying to create a an exciting live show to bring the action to life and to be able to give people more updates and play-by-plays, and provide more video from the course,” said Roche.

Finally, Roche says a major focus will be on improving the expo and demo, giving people a chance to test next year’s bikes in a test area or by taking them for a ride.