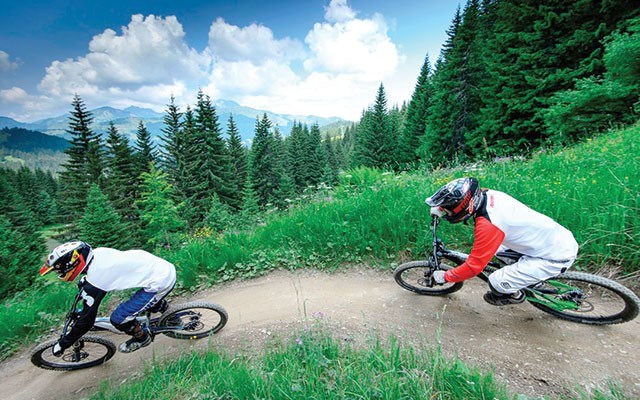 Les Get To It Crankworx announced Nov. 24 that the European leg of its world tour will be relocating to a new destination in the France Alps for the upcoming season — Les Gets. Photo courtesy of Crankworx

Les Deux Alpes' loss is Les Gets' gain after Crankworx announced Nov. 24 that the European leg of its word tour will be relocating to a new destination in the France Alps for the upcoming season.

The news was a bit of an open secret in the pro mountain bike circuit, but event organizers chose to delay the official announcement in the wake of the recent Paris shootings.

"Our license has expired with Les Deux Alpes and it seemed like time to explore a new opportunity," said Kinnaird, who first joined Crankworx as a volunteer in 2005. "Les Deux Alpes is not the easiest to get to and it never quite took off for various reasons. From an on-site perspective, it struggled, although from an online perspective it was great and the views were massive. We tried really hard with the group there but it never seemed to take off."

Located in the multi-resort Portes du Soleil circuit near the Swiss border, Les Gets is only an hour's drive from Geneva and was the first European resort to customize ski lifts to accommodate mountain bikes. It offers 95 kilometres of bike trails and three modified chairlifts, and has previously hosted five World Cups and several French nationals.

Les Gets is also famous among riders for launching the rivalry between Frenchman Fabien Barel and British rider Steve Peat, and Kinnaird said organizers would attempt to rebuild the original course the two battled each other down.

"They are going to try and revive the old 2004 World Championship course for the downhill, which is really cool," he said. "The excitement for it seems much higher already."

Reigning respective King and Queen of the Crankworx World Tour, Bernard Kerr and Anneke Beerten, are both expected to defend their crowns at the new June 15 to 19 event.

As usual, each race series will be worth $5,000 to the rider who earns the title, with a $5,000 bonus available to anyone who can win all four races in the DH series.

The marquee event, the Crankworx Slopestyle Championship, will be worth $25,000 with an additional $25,000 prize up for grabs for the rider who can win all three events to secure the elusive Triple Crown of Slopestyle — which so far has never been done.

Crankworx gets rolling Down Under March 9 to 13 and returns home to Whistler for a 10-day event running August 12 to21.