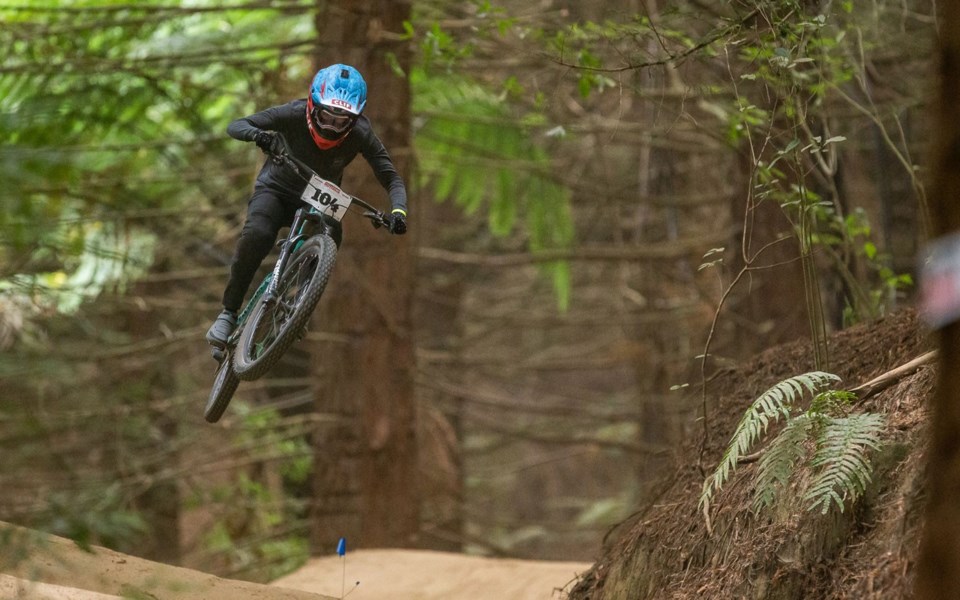 It's still the heart of ski season, but even in Whistler, mountain biking is never far from the front of one's mind.

If you need a splash of summer, five Crankworx Rotorua events will be broadcast online through Red Bull TV in the coming days.

Start off with the 100% Dual Slalom on Wednesday, March 4 at 8:30 p.m., then the next night, the CLIF Dual Speed and Style will run, also at 8:30 p.m. On Friday, March 6, the Maxxis Slopestyle in Memory of McGazza is set for 5 p.m., with the RockShox Rotorua Pump Track Challenge going at 10:30 p.m. that evening. The broadcast schedule wraps up with the Crankworx Rotorua Downhill at 6:30 p.m. on Saturday, March 7.

Tune in at redbull.com/crankworx or visit crankworx.com for more info.

Oberhof was not kind to local luge athletes Caitlin Nash and Natalie Corless at the FIL Junior World Championships on Feb. 21.

Competing in women's singles, Nash and Corless finished 15th and 21st, respectively, as Germany's Jessica Degenhardt topped Russia's Diana Loginova and Austria's Lisa Schulte for gold. The top Canadians were Ava Luscombe and Kailey Allan just ahead of Nash in 13th and 14th, in order.

Nash and Corless also competed as a doubles sled, helping the Canadians (also featuring Allan and Zajansky) to a fifth-place finish in the team competition on Feb. 22, becoming the top-finishing squad with a female doubles sled.

In the doubles competition, meanwhile, Nash and Corless finished 15th overall and as the top female sled.

Pochay-McBain finished the 15-km free contest in 47 minutes and 35.3 seconds (47:35.3) to top the female category and the 13-to-15 event. Colleen Little was second overall while Sea to Sky teammate Sofie Hill took third overall and first in 16-and-17.

Full results are online at www.zone4.ca.

Canadians Christine de Bruin and Kristen Bujnowski scored bronze at the IBSF World Championships for the second year in a row.

Sitting in fifth after the first two runs in Altenberg, Germany, the duo put it together on Day 2, leaping into third spot and finishing 1.06 seconds behind winners Kaillie Humphries and Lauren Gibbs of the United States. Germany's Kim Kalicki and Kira Lipperheide finished in second.

"I made some mistakes in the first run today but in the second run I thought this is my last run of the season, go out and enjoy it and have a good one," de Bruin said in a release after the second day of racing.

In the men's two-man race, Canadian Justin Kripps and Cameron Stones struggled to an 11th-place finish, starting out with the sixth-best run but slipping from there. Kripps and Stones finished 2.74 seconds behind winners Francesco Friedrich and Thorsten Margis of Germany, while fellow Germans Johannes Lochner and Christopher Weber were second. Latvia's Oskars Kiebermanis and Matiss Miknis rounded out the podium in third.

Kripps came into World Championships on a roll, though, with back-to-back bronze medals in two-man BMW IBSF World Cup action in Sigulda, Latvia on Feb. 15 and 16.

To start, Kripps and brakeman Benjamin Coakwell came in 0.33 seconds back of winners Kiebermanis and Miknis of the host Latvians, while Germans Friedrich and Martin Grothkopp placed second.

The next day, Kripps and brakeman Samuel Giguere came in 0.41 seconds back of Kiebermanis and Miknis while the Swiss sled of Simon Friedli and Gregory Jones slid into second.

"It was really good today. These are the first races we have had on this track, so we were just trying to get in the medals. We managed to get on the podium in both races, so we achieved our goal," Kripps said in a release after the Feb. 16 race.

In the women's race, Canada's de Bruin and Bujnowski posted a fifth-place showing, 0.34 seconds back of winners Nadezhda Sergeeva and Elena Mamedova of Russia, while Romanians Andreea Grecu and Ioana Gheorge took second and Germans Stephanie Schneider and Lisette Thoene were third.

In skeleton action, North Vancouver's Jane Channell was the top Canadian in 16th, 1.91 seconds back of champion Elena Nikitina of Russia. Switzerland's Marina Gilardoni and Austria's Janine Flock rounded out the podium in second and third, respectively. Other Canadians were Mirela Rahneva in 21st and Madison Charney in 26th.

Remme scored a seventh-place finish, 2.77 seconds back of winner Federica Brignone of Italy, who paced well ahead of fellow podium finishers Franziska Gritsch of Austria and Ester Ledecka of Czechia. The only other Canadian, Marie-Michele Gagnon, took 15th.

In the downhill the day before, Gagnon was the top Canadian in 22nd as Lara Gut-Behrami of Switzerland edged out fellow Swiss racer Corinne Suter and Austria's Nina Ortlieb for the top spot.

In the Feb. 21 downhill, Gagnon took a 23rd-place finish as Gut-Behrami and Suter were once again in the top two spots and Austria's Stephanie Venier was third. Remme, meanwhile, was 25th.

The lone men's race of the weekend, meanwhile, was a giant slalom at Niigata Yuzawa Naeba, Japan on Feb. 22.

Erik Read was the top Canadian in 22nd as Croatia's Filip Zubcic topped Switzerland's Marco Odermatt and Tommy Ford of the United States. Trevor Philp ended up in 25th.

Competing with heavy hearts, the Canadian moguls team never the less rallied to claim a pair of podium appearances at the FIS World Cup contest in Tazawako, Japan.

In the first competition since the death of up-and-coming skier Brayden Kuroda on Feb. 17, Mikaël Kingsbury came out on top ahead of Kazakhstan's Dmitriy Reikherd and fellow Canadian Laurent Dumais in single moguls competition on Feb. 22.

On the women's side, Chloe Dufour-Lapointe was the top Canadian in 19th as France's Perrine Laffont bested Japan's Junko Hoshino and Australia's Jakara Anthony for the victory. Other Canadians were Berkley Brown in 20th, Valerie Gilbert in 21st and Freestyle Whistler alumnus Maia Schwinghammer in 24th.

The only racer to top Drury was Switzerland's Marc Bischofberger, while France's Arnaud Bovolenta took a third-place finish. Another Canadian, Brady Leman, also made the big final and placed fourth. Other Canadians included Chris Del Bosco in 10th, Zach Belczyk in 28th and Kristofor Mahler in 34th.

On the women's side, Whistler's Marielle Thompson advanced to the big final but was off the podium in fourth as Switzerland's Fanny Smith topped France's Marielle Berger Sabbatel and Germany's Daniela Maier for the win. The other Canadians in action were Abby McEwen in sixth and India Sherret in seventh.

Registration for the Pemberton Off-Road Cycling Association (PORCA) race is set to open on Thursday, Feb. 27 at 9 p.m. The fee is $80 for existing PORCA members and $115 for those who are not yet members (as the race's insurance requires all participants to have joined the club).

For more information, check out porcabikes.com/spud-crusher-womens-enduro.