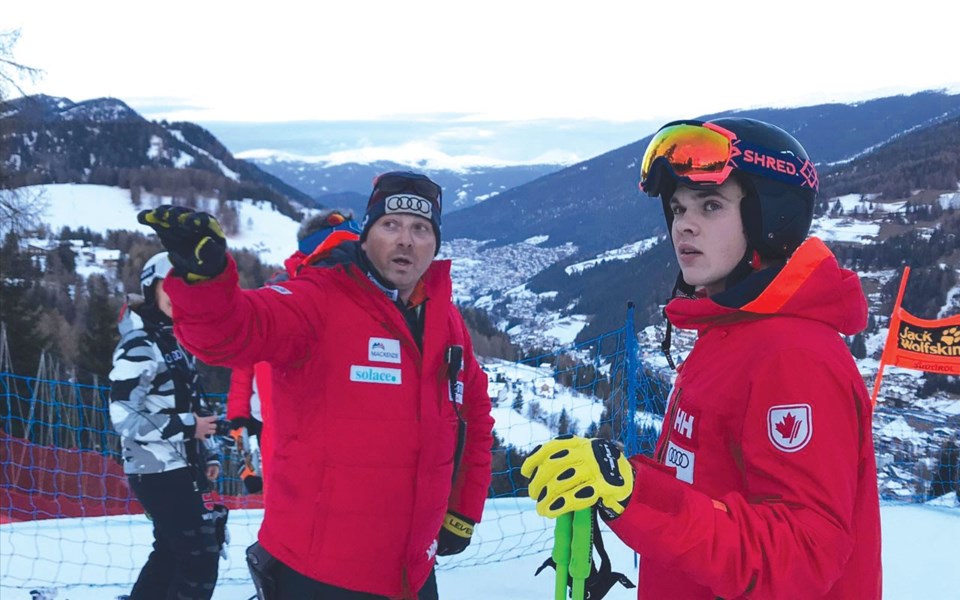 Competing in the super-G, Crawford posted a 17th-place finish, 0.89 seconds off the pace set by winner Vincent Kriechmayr of Austria. Kjetil Jansrud of Norway placed second while Thomas Dressen of Germany wound up third.

The day was beset by foggy conditions that created long delays, and prevented fellow WMSC grad Brodie Seger from racing.

"I kept my head in a good place and when it was time to go I totally forgot about the wait and just skied the way I know how to. Conditions were dark and hard to see but the track stayed in great condition and I was able to take advantage," said Crawford of the delays in a release.

Other Canadians who got in a run were Dustin Cook and Ben Thomsen, finishing 40th and 43rd, respectively.

The women's racing in Val d'Isere, France, was wiped out due to weather.

In a venue known for dingers, Whistler's Teal Harle socked a home run on Dec. 21.

Competing at SunTrust Park, the home of Major League Baseball's Atlanta Braves, Harle took third in the FIS World Cup big air men's event. Harle put up a two-run score of 185.25 to place 2.25 points back of winner Alexander Hall of the United States and 1.25 points back of Antoine Adelisse of France. Other Canadians included Alex Beaulieu-Marchand and Evan McEachran back to back in seventh and eighth, respectively, while Max Moffatt wound up in 17th, Mark Hendrickson was 19th, Etienne Geoffroy Gagnon took 20th and Edouard Therriault was 23rd.

On the women's side, Megan Oldham was the lone Canadian in sixth, while the Swiss took the top two spots at Mathilde Gremaud topped Giulia Tanno. Great Britain's Isabel Atkin placed third.

In the snowboard contest on Dec. 20, meanwhile, Canada's Nicolas Laframboise placed second in the men's event, 10.50 points behind American Chris Corning, who ran away with the win. Whistler's Darcy Sharpe was ninth while Mark McMorris was 32nd, and Michael Ciccarelli was 37th.

As for the women, Brooke Voigt landed on the podium in third behind two Japanese competitors as Reira Iwabuchi scored the win and Kokomo Murase placed second.

Canadians hit the podium in Innichen

Canadian ski-cross athletes managed to keep it together in the face of wild weather conditions at Innichen, Italy.

Heavy rain and snow forced organizers to cancel the final heats of the Dec. 21 race and the training results from the day prior stood as official.

Kevin Drury nabbed his third victory of the season on the men's side.

"Yesterday was a battle. Just trying to keep it as smooth as possible through all those big holes and ruts. Always happy to win a quali. Landing on the podium always feels good, doesn't matter really how, still feels good," Drury said in a release.

In Dec. 22 action, Thompson jumped back onto the podium with a second-place showing behind Switzerland's Fanny Smith while Germany's Daniela Maier wound up third. Canadians dominated the small final with Hoffos, Phelan and Sherret taking fifth, sixth and seventh in order. Lastly, Chore took 13th and McEwen was 16th.

Canadian skier Noah Bowman held off a pair of Americans to win the FIS World Cup halfpipe at Secret Garden, China on Dec. 21.

Bowman scored a 91.50 in his second of three attempts to knock off Yankee Aaron Blunck by 0.75 points and Lyman Currier by 1.75 points.

On the women's side, Rachael Karker's first run of 88.75 proved enough to score second spot behind only Russian Valeriya Demidova, who posted a 92.50. China's Fanghui Li, meanwhile, placed third.

Three local equestrians finished in the provincial top five in their respective divisions in the 2019 BC Hunter Jumper Association (BCHJA) season.

Gabby Holland, who trains with Shirley Hills of the Pemberton Valley Equestrian Centre, placed third in the province at the Open (to Pro) Division in both the 1.15-metre Jumper and 1.15-m Junior Amateur Division levels. Holland accomplished the feats while riding a 16-year-old Dutch Warmblood named Icarius.

As well, Sally Warner took fifth in the province in the .90-m Amateur division while riding Rivaldi. Warner, like Holland, trains under Hills.

The awards were officially handed out on Dec. 7 at the BCHJA's Year-End Awards Gala at Langley's Newlands Golf and Country Club.

The Whistler Half Marathon will be marking its 10th anniversary in 2020, and if you want to take part in the festivities, you can claim your spot soon.

"People are trying to get their spot and nail down their New Year's resolutions, so it's always a fun tie-in with that," said race director and founder Dave Clark. "A new year, new perspective, new goals."

While he's still confirming how the anniversary will be marked, Clark said there won't be any changes to this year's course or to the race offerings, as the 30-kilometre, 10-km, 5-km, kids' run and, of course, the half marathon, will all be offered this year. The Dog Jog in support of WAG will return on June 7, as will the Recoverun, a free, coached, slow-paced run to help runners bounce back from the "hard push" the day before.

Since its inception, the Whistler Half Marathon has supported Crohn's and Colitis Canada, raising more than $185,000, and Clark hopes to top the $200,000 mark this time around.