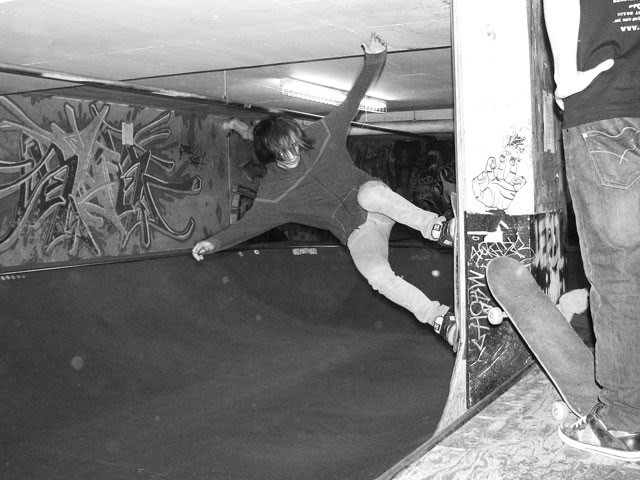 Last Wall The Creekside skatepark will have to find a new home November.

When skateboarders moved into the Franz’s Trail parkade more than four years ago — first secretly and later with Whistler-Blackcomb’s support — there was a lot less traffic.

Now, with the addition of new hotels and quarter-ownership units to Creekside, and more day skiers and locals using the indoor lot, the parkade fills up on weekends.

As a result of the increased demand for parking stalls, Whistler-Blackcomb will be taking the skatepark area back on Nov. 15, 2008 for the winter season. In compensation they have offered to help the Whistler Skateboard Association find a new indoor facility.

“It was never meant to be a permanent facility,” said Lenny Rubenovitch of the Whistler Skateboard Association. “The value of the parkade itself — the amenities at Franz’s Trail, the Olympic venue, the new hotels — was just too high. We were never promised a permanent location.”

The Whistler Skateboard Association was offered space in the Air Dome, but declined because of the small space not being used by mountain bikers. The group is now looking at other options, including warehouse space in Function Junction, and has halted plans to build a skatepark.

“By November, hopefully we’ll have some ideas and funding in place for a permanent facility for all of our jumps, ramps, and rails,” said Rubenovitch.

Although he appreciates that some skateboarders may be frustrated, Rubenovitch is asking skateboarders to be on their best behaviour when using the facility. Bad behaviour, such as graffiti and vandalism, may result in the park being closed early, and might prevent Whistler-Blackcomb from providing assistance in finding a facility in the future.

Because most of the problems occur late at night, the skatepark will close at 10 p.m. nightly, when the lights are turned off. Security guards will visit the area to make sure that skaters have left.

“Skaters might not agree, but we have to look at the bigger picture,” said Rubenovitch. “I know the mountains are looking at the big picture, and they’re working with us to find a new space. It’s in our interest to continue to work with them and have them support us because that support goes a long way.”

To keep the existing park clean, the association plans to host regular skate and clean nights through to November. Since the park was almost closed in the fall because of vandalism and disrespecting the arcade, the association has been credited with keeping the parkade in good condition. There have been a few incidents, including one where skaters turned on the lights themselves after 10 p.m., but overall skaters are taking more responsibility for maintaining the park.

Details on the first clean-up night will be announced in the coming weeks. For regular updates, the Whistler Skateboard Association has a Facebook page, and a website at www.whistlerskate.org.