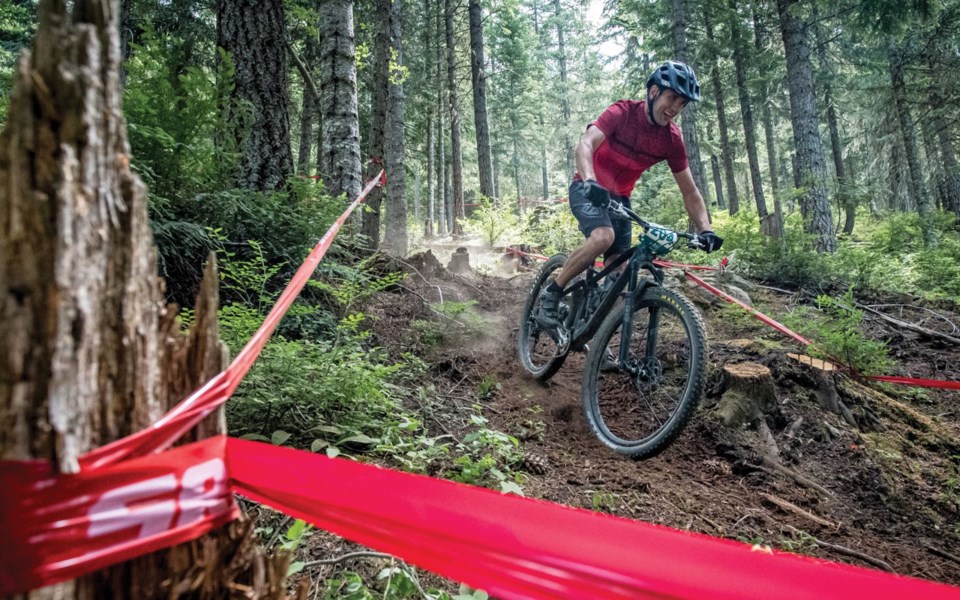 ROLLING THROUGH Peter Cudmore won the master's men 30-to-39 division at the Whistler Canada Cup XCO on June 22. <ParaStyle:CUTLINE\:CUTLINE Credit>Photo by Scott Robarts

Being a Whistlerite has its privileges.

Peter Cudmore can certainly attest to that after winning the master men 30-to-39 division in the Whistler Canada Cup race on June 22.

Cudmore posted the fastest time of the group on each of the four laps, eventually topping Vancouver's Richard Gregory by more than three minutes.

"I was the only local in my category there, so it's trails that I've ridden a bunch, so I felt pretty comfortable on that, even though there were some new sections on each of the trails that I normally wouldn't ride," he said. "There was one section on Roam in the Loam, which is one of the more popular trails there. Before the end, you ride onto a new singletrack section that had a lot more climbing than I was expecting.

"It was a lot more tiring when you thought you were at the bottom of a descent and it threw you a bit of a curveball there."

Cudmore, who lived nearby trails incorporated into the course such as Roam in the Loam and Instant Gratification in the Benchlands last year, explained that the Canada Cup regulars found the course challenging, though for him, it was a regular day.

In the elite men's event, Peter Disera of Barrie, Ont. earned the victory, easily putting up the best time on all six laps to top Norco Factory Racing teammate Andrew L'Esperance of Halifax by three minutes and 16 seconds (3:16).

"We're used to hitting hard courses, technical courses and physical courses," he said. "This one was next level, World Cup level. It had 1,200 metres of climbing in 90 minutes, which was quite substantial and quite punishing."

With some sections of new trail being incorporated into the course, Disera initially had some concerns, but acknowledged they went away when he was up to speed on race day.

"It was a lot of fun and I really enjoyed racing the course," he said. "Pre-riding it, I was a little bit concerned since it was really punishing, but then at race speed, it had a bit more flow."

As national champion and a regular on the World Cup circuit, Disera had a couple reasons to come out to the race. Firstly, there was a break in the international schedule and it was an opportunity to stay fresh, but more importantly, with the Summer Olympic Games in Tokyo looming next summer, there's a mad dash for top athletes to earn Union Cycliste International (UCI) points for one's country. The win was only 30 points, equivalent to a 38th-place World Cup finish, but they all add up.

"The more points we can contribute towards the nation's ranking, the better potential we have to get more than just one spot right now for the men's," he said.

So far this season, Disera has had stronger results in short-circuit races, including seventh and 14th, this year, and posted 19th and 49th in Olympic distance in World Cups, with the latter being a "blip" in a season that has otherwise met or exceeded his expectations.

As for the elite women, three-time Olympian and two-time world champion Catharine Pendrel came away with the crown in a close battle with fellow World Cup racer Sandra Walter, with Pendrel pulling away to win by 46 seconds on a course she'd hold up against many others on the international scene.

"It's always nice to be able to get in a race at home and the course in Whistler is a lot of fun," she said. "It was a nice chance for us to push each other to see where we're at in our training before we head to the next World Cup, and also earn some points to help our ranking."

Both 39, Pendrel and Walter are in the top four of riders being considered for the Tokyo Games in 2020. Pendrel said she's glad to have retained her consistency at this point in her career.

"Like all the other girls out there, it's just consistent work. I've come off of a good three-week training block at home, so even though you have a little fatigue when you're racing more locally, I'll have hopefully done the work to make it so that I'm stronger when I get back to World Cup racing," she said.

While still posting solid Olympic-distance results of 12th and 14th so far this year, Pendrel still feels she has more to give this season.

"When I'm not the best, it's always a bit of a disappointment, but I think I've had a good ramp-up and I'm consistently top 15 in the world. I'm looking to move into that top 10," she said.

Two other Whistler riders competed. Thomas Legg took second in the U13 men's division and Dale Tiessen was seventh in the master's men 40-to-49 category.