One coach and two athletes to represent Whistler Olympic Park
Nov 13, 2009 7:32 AM By: Andrew Mitchell 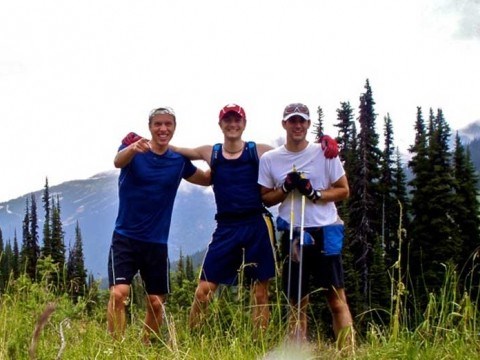 The Callaghan Valley Training Centre was left in disarray after its second official season with no coach to lead the group. The resulting confusion and uncertainty prompted all but one of its dozen athletes to leave Whistler for other national training centres in Canmore and elsewhere. Call it growing pains.

Cross Country B.C. remained committed to the program, however, and the CVTC is here for a third season with a new coach, two committed athletes and access to an Olympic legacy they believe is second-to-none.

"I was in Newfoundland coaching the provincial team for the last four years... and then the opportunity came up to coach (with the Callaghan Valley Training Centre), which is really a once in a lifetime opportunity to be close to the Olympics and to build a new program," said Lee Churchill, a native Newfoundlander who took on the head coach position in the spring.

And while Whistler has been criticized as being a difficult environment for athletes because of the lack of affordable housing, Churchill says the year-round training opportunities are second-to-none, while the athletes' village itself will offer both short- and long-term housing for athletes after the Games - "just 15 minutes up the road from the World Class ski trails at Whistler Olympic Park, where we get to bump elbows with the best athletes in the world. Who could ask for better than that?"

Coaching in Whistler has also given Churchill a chance to meet with other sports organizations and appreciate the high level of athleticism in town. His skiers are roller skiing on local roads, biking and running on trails, in the pool and gym, and taking advantage of all the training opportunities that are available from Squamish to Pemberton, including Whistler Olympic Park.

"That's the thing about cross-country skiing, you put all those opportunities for cross-training to good use," he said.

His skiers are training seven days a week and at least twice a day on five of those days. Some of that training is solo but they get together as a team to do hill sprints with poles and roller skis and to fit in other types of training as well.

"The guys are putting in 15 to 20 hours of training a week, and that's just the physical training. We also have mental preparation, nutrition, that kind of thing."

While the program will need to attract more skiers in the future to be viable, Cross Country B.C. has committed to the program through the season. When housing becomes available Churchill expects it to be easier to attract up and coming athletes looking for a path to the national team.

Right now, however, Churchill is enjoying a small team and the opportunity to ramp up his own coaching from the provincial level to the national level while figuring out the opportunities within the community.

"I really get to work one on one with the athletes and really focus on their development, which is a luxury sometimes," he said. "They're both young, hard-working guys, they're working towards the same goals, and it's working out well."

The main goal for the team this year is to race in Nor Am level events and qualify his skiers for the World Cup event in Canmore in February, and for the Under 23/Junior World Championships in Germany later in the season. His athletes will compete in some local, regional and provincial events as well when it fits in with their schedules, and will participate in some larger camps with other skiers - including a camp that is running through this weekend at Silver Star and Sovereign Lakes at Vernon.

Thomsen D'Hont of Yellowknife is the lone returning skier from last year, but there was no question he was coming back again if it was possible.

"Last year, just being out here and seeing the facilities and the training possibilities right outside your door, it was so good, and I knew that coming back to Whistler was what I wanted to do," he said. "The decision came down between Canmore and here, and I know in Canmore there are a lot of skiers and it could have been good training with a lot of other people, but I've always been good at training on my own and that Whistler was probably better for the training possibilities, like roller skiing loops, running in the mountains and that kind of thing."

Growing up in Yellowknife, D'Hont got his start with a group of older skiers but found himself training on his own after they graduated high school and left for university. He trained on his own, entered events on his own, and crawled his way up the ranks.

"All of high school I was self-motivated, and ended up getting some decent results that were good enough to qualify for a national training centre," he said. He headed to a training centre in Thunder Bay, Ontario for a season before making his way to Whistler.

D'Hont specializes mainly in speed events but finds he spends most of his time training for endurance.

"I've found that I have some natural speed out of the gate but my main weakness has always been maintaining that speed thorough a day of sprinting... four or five starts. Being able to recover well (between starts) is paramount," he said.

D'Hont's long-term goal is to qualify for the Games in 2014. This season he is focused on qualifying for the World Cup race in Canmore before the Olympic Games, and qualifying for a berth in the Under 23 World Championships later in the season.

His other goal for the year is to promote the CVTC among host communities.

He's heading into the season with tendonitis in his foot, but isn't too concerned yet. He's also used the injury as an opportunity to work on things that usually take a backseat to training, like flexibility, core strength and aerobic workouts in the pool. "Things I wouldn't normally be doing if it was just day to day training and roller skiing."

Having one coach and teammate has its advantages as well.

"I like it because you get that much more coach time, so it's almost like having a personal trainer," he said. "It's good because Lee is always tuned in to you, and knows how his athletes are feeling. You can also approach training more day to day as opposed to being bound in a training program, which I think is more effective."

He also recognizes that the ratio will likely change in the near future as other athletes arrive, but at this point he says he won't need as much personal attention moving forward. As well, finding more athletes is important to ensure the survival of the CVTC as a lasting high performance legacy of the Games.

"The number one thing we have to do is get out into the community more and get the community backing us, and increase our exposure a little," he said. "The athletes' village will be awesome where there is more affordable housing for athletes to come here. And we have good facilities there, and the Olympic Park is so close that we'll attract more skiers."

Camille Cheskey is the newcomer to the CVTC, hailing from southern Ontario. Although he could have chosen any training centre in Canada, he says there was a long list of reasons why he eventually decided on Whistler.

"The main push for me is that the training facilities here were absolutely phenomenal," he said. "I didn't know Lee before I moved here, but I also had a lot of faith in him from the start. And the Olympics were a huge reason, just being around the top athletes has been super motivating for me."

Cheskey is heading into the season in top shape, despite being hit with a slew of colds and flus from September onwards.

"I didn't get sick once all spring and summer, which was kind of unusual, but I ended up getting everything at once so I was up and down for the month of October. But I really feel like I'm back now, I don't think I lost any fitness at all because we were really just brushing things up for the winter through October more than building our base, which we worked on all summer," he said.

"Everything got cranked up a notch this summer, so I'm coming into the season with the best fitness of my life."

Like D'Hont, Cheskey is primarily a sprinter, both classic and freestyle, but is working to expand into long distance events.

"It's like learning another technique for me, sprinting always came so naturally - now I have to learn about pacing myself and work on getting my distance up."

He also has a goal of reaching the podium at every race he enters this year, as well as to qualify for the World Cup and junior worlds by earning points at Nor Am events. He also wants to make a strong showing at nationals up against the best skiers in the country.

And while it will be exciting to be back on his skis, Cheskey has enjoyed his dryland training in Whistler.

"It's absolutely amazing, there are so many great opportunities. I can wake up, look out my window in the morning and say 'I'm going to climb that mountain today.' I'm also enjoying the community, there's always something going on that's very unique, very fun.

"I think in terms of the legacies and trails here I'm in the best possible location."