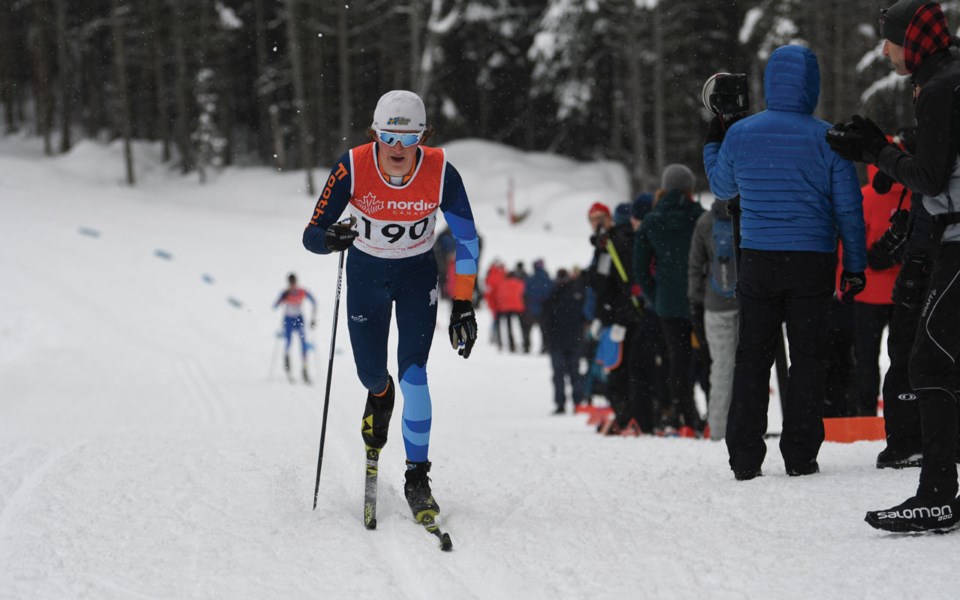 FIT FOR FINLAND Joe Davies is getting set for the FIS Junior World Ski Championships in Finland next month.Photo by Doug Stephen

While Joe Davies was honoured to make Nordiq Canada’s list of alternates for the 2020 FIS Junior World Ski Championships, he was determined to make the team outright in 2021.

The COVID-19 pandemic complicated those efforts, wiping out events including the trials, but the Pemberton cross-country skier found himself qualified based on his 2019-20 season and will line up next month in Vuokatti, Finland.

“It’s super exciting, especially with this year that has had so much uncertainty,” he said. “It’s nice to actually get to race to the best of my ability.”

With the World Championships Trials, originally slated to take place at Whistler Olympic Park earlier this month, ultimately being cancelled, Nordiq Canada released its criteria for athletes to qualify for such major events in December. After analyzing the metrics, Davies was not surprised to get the call that he’d made the team.

With Canada’s World Cup squad serving as a vanguard to Europe, Davies has kept an eye on how things are going and feels confident in his safety as he opts to head overseas.

“There hasn’t been any trouble on the World Cup circuit so far, so I’m not too concerned about it,” he said.

Based out of Canmore, Alta., Davies said he and his junior development teammates have been working since the fall with an eye toward the one potential race.

“At the start of the season, all of our races were cancelled so it was a little up in the air how to approach training this year,” he said. “We knew that World Juniors was going to go ahead relatively early in the season, so me and the other people on the junior national team were just training in preparation that we’re going.”

Because of the quality of internal competition, Davies feels as well prepared as possible given the lack of organized races since March. He knows that everyone else is in a similar position as well.

“It’s definitely going to be interesting because a lot of people don’t have too much of an idea as to how they stack up against everyone else, but I figure I’ve got a pretty fast group of guys to train with,” he said. “I have a decent reference point. I’m keeping up with them and they’re keeping up with me.”

The lack of racing also made it difficult for Davies to do something to directly crack this year’s team, but he said he still harnessed the fire in training and made it a priority to do well when he’s in the start gate.

“Being close last year was a little upsetting, honestly, but it was still good in the sense that I knew I could get there, but the chance to go this year is really awesome,” he said. “I’m finding motivation and you go through ups and downs.

“I’ve had my ups. I’ve had my downs. Now I’m back up and extremely motivated. The entire season of training is going towards this one race, so it’s a little stressful but it’s also a good motivator to give my best.”

Davies and the rest of the team are supposed to head over on Jan. 29. There’s no isolation requirement in Finland, though he will quarantine upon returning to Canada.

“In normal years, we’d have a pre-camp, so we’d be over there for longer, but we’re just flying over, doing the races, then heading home,” he said.

Davies said racers normally find out their events at pre-camp, so he’s not entirely certain right now which races he’ll line up in, though he anticipates he’ll be in the individual start, mass start and relay contests.

Whistler’s Benita Peiffer, meanwhile, was named to the U23 team but declined her spot. Peiffer is rehabbing a torn ACL and meniscus suffered last spring. While she feels recovered enough to go, her fitness was not at the point where she felt competitive and opted to cede her place.

“I think that there’s someone else who could probably represent Canada better than me right now,” she said.

Peiffer, also based in Canmore, acknowledged that she was surprised to see her name listed.

“I was honestly pretty shocked,” she said. “It wasn’t something that was on my mind this year, but I’m honoured that they selected me and I could have had the opportunity to go.”

Peiffer will instead compete in the trials in hopes of landing a spot at the International Biathlon Union Youth World Championships at Obertilliach, Austria starting Feb. 24.

“The past six months have been focused on rehab for me and we’re basically back to normal,” she said. “I’m focused on the biathlon World Juniors right now because that’s more of an attainable goal right now. The end of January was a little too rushed.

“I’m feeling good on my skis and my knee is feeling totally fine.”

Peiffer added that while she recovered, she gained the opportunity to focus on shooting training during the offseason.

“I’ve had all the resources I’ve needed to get back to being healthy and I’ve had a lot of people supporting me,” she said.