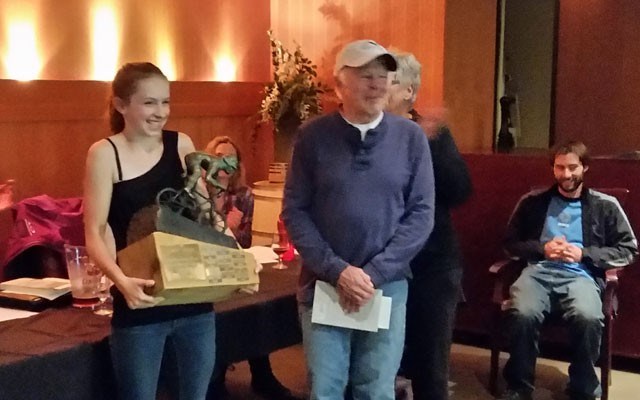 ONE OF MANY Local biker Stephanie Denroche is shown receiving the Lumpy Liedel Memorial Award in this file photo. Denroche was one of four locals named to the Cycling B.C. High Performance Team last month. File Photo

Her first year as part of Cycling BC's High Performance Team was a shocking success.

And Stephanie Denroche is eager to see how things go in her sophomore season after being one of four local riders named to the program for the 2015 season. Georgia Astle, Alex Auger and Austin Reith also made it.

The 16-year-old Denroche is coming off her first season of downhill racing after getting her start in enduro and cross-country riding. It went so well, in fact, that Denroche won the U17 national downhill title at Sun Peaks last July.

"It was a really good success," Denroche said. "I started off just cross-country and then through being on the cross-country part, I started downhill.

"I did well in that. I got to nationals and I won nationals so that worked out really well."

Denroche, who later earned WORCA's Lumpy Liedel Memorial Award as the top junior, explained all her accomplishments toward the season's twilight has given her building blocks for the coming campaign. She also earned gold in her age group in the Canadian Open DH category here at Crankworx among a bevy of other hardware.

"It gives me a bit more confidence because it was at the end of the year," she said. "Last year, I had no idea where I stood with anything. It gives me more confidence, but you can't be too confident, because that's not good either."

Denroche, whose family owns Cross Country Connections, doesn't expect to be travelling as much in the 2015 season, but does hope to earn a chance to defend her national title. That said, she also hopes to keep up with the other disciplines, but acknowledges downhill will be her main focus.

"I think I'm supposed to start to be narrowing down my options, but I want to keep it fun, still," she said. "Downhill is going to be higher in priorities. I'm going to do more races, I think."

Georgia Astle, meanwhile, wasn't pushing her pedals as much as Denroche last summer.

The 17-year-old, and only other local female to make the team, said she had plenty of other obligations that kept her away from several competitions, and is grateful for the opportunity to have been invited back this year — where she'll be around the team more often.

"I wasn't really able to make a lot of the team events, so I was really excited to be able to get to be on the team again and do some training camps," she said. "It was the wrong time, and I didn't know I was going to be this into mountain biking last year.

"When I made the team last year, I wasn't quite as committed.

"But this year, I'm devoting myself to them."

Astle recalled several of her friends were all about enduro riding, and when she picked it up last year, it made an immediate impression on her.

"I knew right away I was hooked and I was so excited to be mountain biking," she said. "I'd done the Whistler high school races, and they're just really short cross-country races. I knew that I liked biking when I did them, but at the start of last year, I wanted to try enduro.

"I loved the atmosphere of getting to ride with your friends and getting to race down the hill."

Astle also noted her time with the team provided her with a higher level of coaching than she'd previously received, allowing her an opportunity to not only improve her skills, but perfect her approach to courses.

"I felt it was really good for me to work with a coach, because I've never really had a one-on-one coach to tell me certain techniques for the race course," she said. "Since I wasn't into racing, I never was able to do a course walk and find the line, so I found that was really helpful with Team BC."

Astle said the highlight of her season was Crankworx, where she posted the best times of the first two stages — besting some big-name pros — before falling off the pace.

"My times were really comparable in the pro field, which I was not expecting, so that was really cool," she said. "Unfortunately, I had a lot of technicals in the rest of the stages so it wasn't comparable overall.

"Now I know where I stand."

On the men's side, Alex Auger and Austin Reith were named to the team.

Auger placed second in the Cycling BC Provincial Downhill Championship in the U17 men's expert race at Kicking Horse last July.

He's excited to take another step forward with the team this year.

"I was super stoked to get the email at school," the 16-year-old said, adding he replied to confirm his interest right away.

Auger said last season was the first time he made true strides forward in the sport.

"I took my training more seriously," he said. "I started training earlier in the spring."

Reith, a cross-country racer, was unavailable for comment before press time.