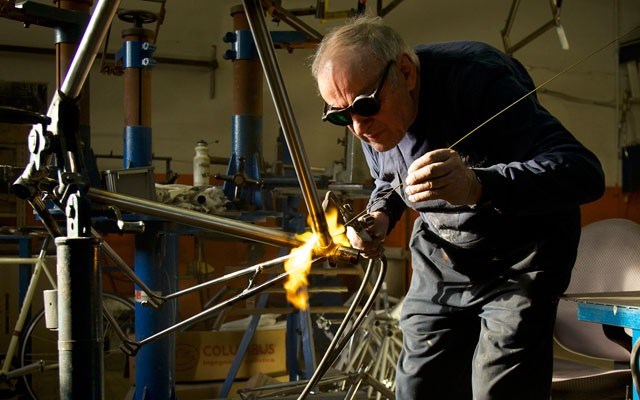 HARD AT WORK Giuseppe Marinoni works on a bicycle frame in this scene from the documentary Marinoni: The Fire in the Frame . Photo submitted

But the relatively short time the two spent together left an impression on the documentarian.

Their meeting came last April at a Vancouver International Film Festival screening of Girardin's documentary Marinoni: The Fire in the Frame, which is currently touring the province. A stop in Whistler is slated for Nov. 5 at Millennium Place at 7 p.m.

Giuseppe Marinoni, a former champion cyclist and current bicycle manufacturer, is the subject of the documentary. Marinoni also once coached Chafe, who along with Cycling Club member Kelly Blunden was killed after being struck by a car when riding on the Duffey Lake Road in May.

"The two of them (Chafe and Marinoni) were so happy to see each other and Ross' family was there. We all chatted and it was amazing. We met after the screening as well and I thought 'What an amazing family. They're so nice,'" he said. "The next thing I know, out in Montreal, I get the news that he was struck by a car.

"I barely knew the guy and I was totally gutted."

The film's Whistler showing will honour Chafe and Blunden. A portion of the screening's proceeds will be donated to the British Columbia Cycling Coalition's safety advocacy efforts. Marinoni has also created a handmade frame that will be raffled off to support the organization.

"It morphed into the idea of doing a fundraiser," he said. "It's a really special stop for me out of the whole tour."

Speaking on Oct. 26, shortly after starting his 13-stop British Columbia tour with stops in Ucluelet and Nanaimo, Girardin noted he already had to order more T-shirts because he'd sold more than he'd anticipated, particularly after roughly 500 people attended three separate screenings in Nanaimo on Sunday.

The documentary was a labour of love for Montrealer Girardin, who worked for three years to get Marinoni to agree to have his story filmed.

"The toughest part of making the film was getting him to participate. His wife always told me 'I'm too nervous to know what my husband might say if I'm not there to watch over him,'" he said.

However, when Marinoni decided to successfully pursue the world record for the 75-to-79 age division for kilometres biked in an hour, he agreed to participate in the project as a legacy for his grandchildren.

"When he was a big racing champ in the '60s, there was basically no footage of him," Girardin said. "He thought it was a nice thing to do for his family to leave a souvenir of their grandpa pedalling."

Girardin was interested in more than just Marinoni's chase for the record, though, calling it "the needle and thread" of the broader life story he hoped to portray.

"When I started filming him in other aspects of his life, other than the record, that's when I encountered some serious friction, which we see at the beginning of the film," Girardin said.

Marinoni's candour made him a fascinating subject, Girardin explained, as he didn't tone down or hold back any of his personality when the cameras started rolling.

"He's one of the sweetest, most sensitive men I've ever met, despite this gruff, curmudgeonly, quirky craftsman, crazy craftsman, cooped-up-for-years (demeanour)," he said.

Girardin got the idea for the film through his hobby of collecting bikes, seeking out the builder of one of his purchases he sought to salvage after realizing they both lived in the same city.

"I used to love the idea of getting an old steel bike out of somebody's shed or garage — bikes that weren't used for years — and fixing these bikes up, refurbish them and get them back on the streets," he said. "I found my first Marinoni and I thought it must be an Italian bicycle. I did some research and sure enough, the maker of the bike was an Italian who lived in Montreal. I went to visit him so I could find out more about the bike. The first time I met him, I knew I wanted to make a film about him.

"I just saw the fire in his eyes and it's something I see rarely in people half his age."

The film was originally screened at Toronto's Hot Docs Film Festival in 2014, hitting the top 10 in a crowded field of roughly 3,000 entries, some of which were multi-million dollar efforts. Its success there and at screenings all over the country has shed more attention on Marinoni than he is used to receiving, though he is taking it in stride, Girardin said.

"He's now picking up on it and he's (realizing) 'I've made a lot of bikes in my life and people who own my bikes are happy to meet me,'" he said.

Tickets for the screening are $21.77 with taxes and are available at www.eventbrite.ca/e/marinoni-screening-whistler-tickets-18843590687.