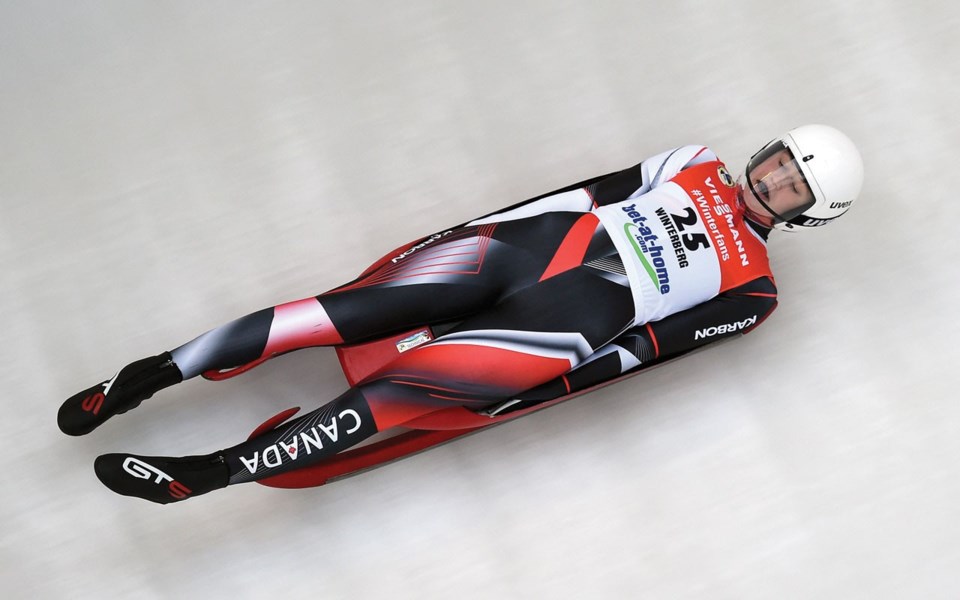 Ellis said she felt confident heading in, and managed to nail a track that provides fewer challenges than others on tour.

"I had good training all week and was able to put down two consistent runs. It put me up there," she said. "It's a fun track. It's one of the easier ones on tour, which makes for really comfortable sliding. You're just able to relax and push back and let the sled take you down."

Ellis acknowledged that while she had high hopes for her first contest of the year, placing as high as she did wasn't necessarily on her radar.

"It was kind of a shock for me to end up that high in the rankings. My goal was top 15, and being the World Cup opener, I wanted to see where I fit in after I had a good summer and good preseason training," she said.

In relay action on Nov. 24, Ellis helped Canada to a fourth-place finish alongside Whistler's Reid Watts and the doubles team of Tristan Walker and Justin Snith.

The strong start is a particular shot in the arm for Ellis, who will look to carry the momentum forward on two familiar tracks in upcoming races in Lake Placid, N.Y. and her home track here in Whistler for World Cup contests in December.

"It';s definitely a confidence booster," she said. "It's good and it's motivating, for sure."

In the offseason, Ellis moved to Calgary for the summer after finishing school at Pemberton Secondary in order to train for the year. In the early going, it seems to have worked out, as she earned her spot on the NextGen Elite squad and lined up a season at the sport's highest level.

Ellis noted that she only found out that she would be racing World Cup at the end of the Canadian selection races in October, and now that she's there, is soaking it all in.

"I'm not really putting too much expectation on it. I'm just going to try to take in my first full year on the senior circuit, just try to slide well and consistent and see where it goes," she said.

Ellis was called up to do two late-season races last year, taking 16th in Altenberg and 21st in Oberhof, but with the Youth Olympic Games on tap this year, thought that she might do another season of junior to qualify.

"I ended up coming up to the World Cup team, which was exciting, for sure, and a bit of a surprise," she said.

The Canadian team won't race a full World Cup schedule this year, instead opting to skip a couple late-season races in order to get more training time on less-familiar tracks. As a young athlete, Ellis feels it's the right move.

"I think it'll be best in the long term to get more comfortable on those tracks," she said. "I think that'll be really beneficial going into future races."

She's looking forward to two weeks at Sigulda, Latvia, which is a hard track that the Canadian team doesn't often visit, while she's also glad to get extra volume at Altenberg in advance of the race there.

In other action in Igls, lone Canadian Watts started the season with a 19th-place finish, 0.742 seconds behind winner Jonas Mueller of Austria. Russia's Roman Repilov and Italy's Dominik Fischnaller rounded out the podium.

In doubles action, Walker and Snith slid to a ninth-place finish, 0.345 seconds back of winners Toni Eggert and Sascha Benecken of Germany. Runners-up were Tobias Wendl and Tobias Arlt, also of Germany, and Thomas Steu and Lorenz Koller of Austria.