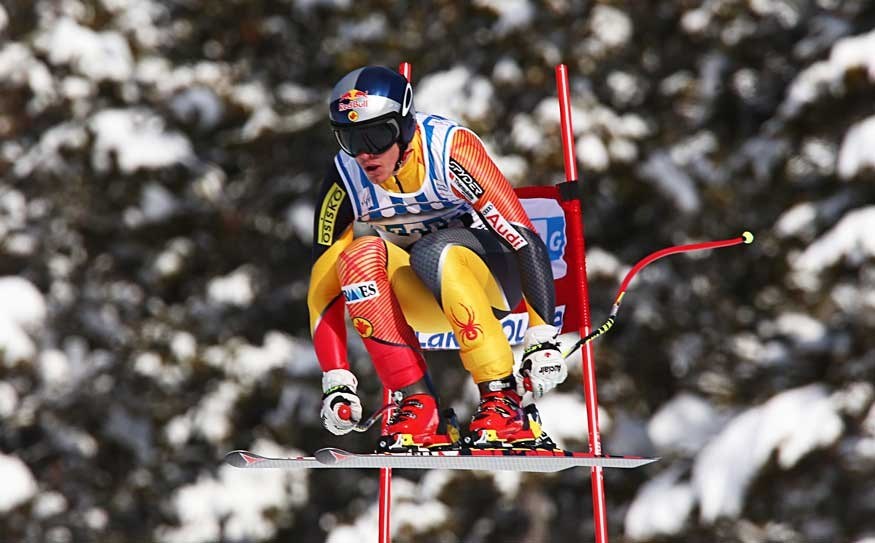 ERIK THE RAD Erik Guay led Canada with a sixth place result in the Lake Louise downhill, a race decided by hundredths of a second. Not bad for a guy who had knee surgery in September. Photo By Malcom Carmichael, alpine canada

The Canadian Alpine Ski Team kick started its speed season at Lake Louise Winterstart this past weekend, with the men racing downhill and super G. For a few athletes, namely Whistler's Manuel Osborne-Paradis and Calgary's John Kucera, it was a return to racing after long absences due to injuries, and on that front the event went well.

In the downhill, world downhill champion Erik Guay, who had knee surgery in September, led the way for Canada in sixth place while Jan Hudec — returning after a two-medal season — was 17th. Osborne-Paradis also made points in the top 30 after starting 44th to improve his start position in the next race.

"If I look at where I was six weeks ago, I'm absolutely ecstatic with the progress I've made since," said Guay. "I'm just really happy with my run... If I skied the whole course the way I skied the bottom and the top part I will absolutely be competitive. It's not so much the course itself, it's the way I'm skiing it. For the moment I'm just missing the volume (time spent on snow)."

For Osborne-Paradis, who has not raced since January 2011, it was important to be back in the points.

"It's nice to know that you can still be competitive," he said. "With training, you never really know. Catching an edge in the middle I lost quite a bit of speed, but I think, all in all, the skiing is where it needs to be to be competitive. I've just got to get this start number back down where the good guys are and once that happens I'll be race-ready anyways."

Kucera, who hasn't raced at the top level since the first of a string of leg injuries in November of 2009, finished just outside of the top 30 in 36th. Ben Thomsen, one of the team's biggest surprises last year, hit a rock near the top of the course and fell off the pace to finish 45th. Jeffrey Frisch was 48th.

In the super G the next day there was some controversy with a few Canadian athletes not getting bibs, but the day was big for one athlete in particular. John Kucera placed 14th on the day, earning his first FIS race points since his injury. Guay led the team in 11th, Hudec was 18th and Dustin Cook earned points in 28th, but it was Kucera's result that attracted the most attention.

"I'm in a bit of shock," said Kucera after the race. "I mean, that's huge — just to be able to stack in there with those guys.

"The amount of miles that these guys have on me right now is huge and some of this confidence stuff that I have been struggling with in training, just due to the lack of time... especially in the super G. And then (to get that result) on the hill that, you know, took me out three years ago, it was cool that I could come out here."

Kucera won the world championship in 2009 and was one of the top up-and-coming racers on the national team when he broke his tibia and fibula at Lake Louise. He was on pace to return for the 2011 season, but broke the same leg again in training. He required a second surgery; some time of to recuperate and rehabilitate his leg, then made a tentative return last season only to miss the last few amateur races on his calendar with a back injury.

A healthy Kucera racing at his potential is a huge asset for the team.

"For me, Johnny's accomplishment yesterday (in downhill) and specifically today is as good as winning a race," said Alpine Canada president Max Gartner.

"If you've been away from the sport for three years you lose your starting positions; you lose your confidence. To get back out here on the mountain where you had your major injury takes so much mental strength and I couldn't be happier for him. That, for me, was the real performance of the weekend."

Aksel Lund-Svindal earned another gold medal in the super G, while Adrien Theaux of France took the silver and Austria's Joachim Puchner the bronze.

Guay hoped for better, but was happy to have a second good result so soon after his surgery.

"If I look at my run, I thought I skied very well, but I didn't quite take those chances necessary to be on the podium," he said.

"I need a little bit more time on snow to find that middle ground where I am pushing the line and skiing well."

Women in points at Aspen

While the men were racing speed at Lake Louise, the women's technical team was racing giant slalom and slalom at Aspen, Colorado. It was a solid if unspectacular race for the team with athletes earning points in both events, but finishing well off podium pace.

In the giant slalom, Marie-Pier Prefontaine led the team in 13th place, while Marie-Michele Gagnon finished 23rd. The win went to Tina Maze of Slovenia, followed by Kathrin Zettel of Austria and Viktoria Rebensburg of Germany.

In the slalom, Marie-Michele Gagnon was 18th and Brittany Phelan 21st. Gagnon has not failed to qualify for a second run in the first four races of the season and as a result she's currently ranked seventh overall in the world.

The win in the slalom went to Kathrin Zettel, while Austria's Marlies Schild picked up the silver. Tina Maze made the podium once again in third place.