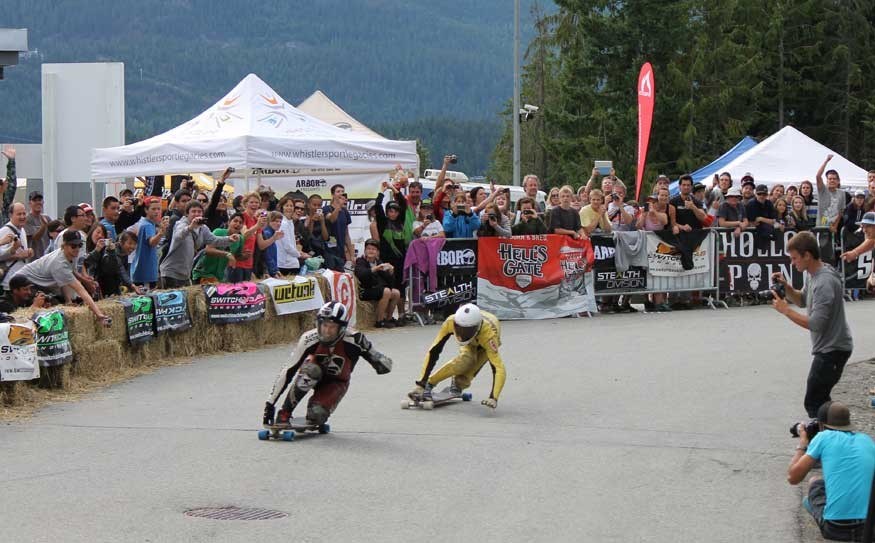 For the second straight year the final downhill race at the Whistler Longboard Festival finished with a whiff of controversy. In 2011, California's James Kelly won the race after bumping into Kyle Martin and knocking him off his skateboard; in 2012, Kelly got the short end of the stick in the finals after Vancouver's Kevin Reimer bumped into him, with both skaters getting knocked off their boards and out of contention.

There was a heated exchange after the race, but Reimer maintained that the contact was incidental — he was going for the pass on the inside, but slid out too far on a corner to take out the defending champion. After reviewing a cell phone video of the crash, Kelly agreed that was probably the case — although he was still disappointed not to defend his title at the event and miss out on one of the largest cash prizes in North America — $5,000 split between the top three men.

Kelly's loss was Andrew Chapman's gain. He stayed out of the crash to take his first major win on the circuit, edging out Max Wipperman, who placed second, while Reimer recovered fastest to take the final spot on the podium.

For Chapman, a 23-year-old racer from London, Ontario, it was all about opportunity."I just stood back, they (Reimer and Kelly) tangled... I saw James try to pass and I'm like, hmmm, something could happen here. And it did. Then I saw Max do one of these (mimes a slide) and I was like, 'Oh yeah, inside."

Chapman, who rides for Landyachts, has been racing for five years and while he's finished on top a few times he said the Whistler Sliding Centre Downhill is his biggest result to date.

It was a long day of racing to get to the final run, with an injury on course holding up the first heat by about 45 minutes. As a result, it was almost 6 p.m. before the last run of the day got underway.

Chapman knew it would be tough to beat Reimer and Kelly, arguably two of the top longboarders in the world right now. But anything can happen in a sport where skaters break 100km/h (top speeds at Whistler were over 85km/h) and use controlled skids to make high speed turns.

"In the final I was last off the push. I just held back and watched everybody else do their thing, and took the opportunities on their mistakes," he said. "Two guys crashed and I knew I had an opportunity because my dominant corner is right handers (the last two turns on the course are right-hand) and that's where I took the last guy (Wipperman). I just tried to hold on with tired legs."

The skaters woke up to rain on Sunday morning after skating the course the past few days in dry, hot conditions. The first round of racing took place with a wet slippery course that only got more treacherous as it started to dry and riders got caught up on patches of wet road. However, by the last few rounds the road was completely dry, giving the fastest racers free reign to go fast and make daring passes.

Chapman said he liked the course, which is 1.6km long and has a vertical drop over 300 metres, and has 10 corners — seven of them hairpins.

"There's so many corners and you're always going in the opposite direction," he said. "It's all about leg compressions, and I was so tired by the end, but you just have to stay in there."

While the crowd started out smaller than last year with the rain, the lower corners began to fill out until there were probably a few thousand spectators by the finals. For Chapman, it was the biggest crowd he'd ever experienced.

"It was just a tunnel of people," he said. "And, oh man, it felt good. I knew I had it at that point. This was definitely one of the better tunnels of people (compared to other races) from all the way to the top of the course, and at the bottom it was just a wall of people."

Chapman isn't following the tour to Europe with other riders, and isn't going to race this weekend in Kimberly. Instead, he's focused on a small event on Salt Spring Island in August, and will head to Calgary in September for a World Cup.

"We felt that everything went excellent," said Cation, despite the fact that the surprise rain on Sunday likely affected the size of the crowd. "The main metrics for us are safety and then just the smiles on people's faces. The racers were really quite pleased because of the challenge and technical nature of the track. The guys that weren't here last year were quite impressed and are already telling me they'll be returning for future events."

Cation will be following up with event sponsors and partners as well, but so far has received a lot of positive feedback.

Organizationally it was difficult. Longboarders raced uphill to put out a fire during training and qualifying runs on Saturday, and at one point had to chase a bear from the track. Still, with wet and patchy conditions on Sunday, there was just one injury — and Cation said that rider was taken by ambulance as a precaution after a possible concussion and head injury. "We'll be following up, but he was smiling and laughing and in good spirits, but he needed to get an x-ray to make sure everything was okay."

After Kelly, the next four racers decided their rankings in the small final. Louis Pilloni won that event, followed by Bryon Essert, Nick Breton and Zen Shikaze, who posted the fastest qualifying time.

In 17 and Under Juniors, it was Josh Richter in first, followed by Charlie Darrargh, Chance Gaul and Daniel Luna.

In Super Grom it was Jack Craddock, Quinn Dubois, Ryan Calabrese and Max Moxisanen. In the women's race it was Dominique Vukorep, Elena Corrigal, Rachel Rayne and Anna O'Neil.

In the 30-Plus Young Master race, the top four were Matt Kroetsch, Nico Desmarais, Jeff Budro and Tom Edstrand.

On Thursday there were two events, a 20km Enduro Race and a 10km Skate X Shoot biathlon event where skaters did two loops of a 5km course and hit the range twice.