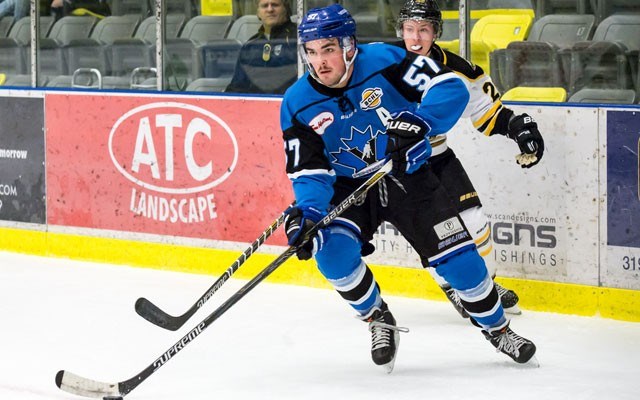 golden boy Dante Fabbro, who has Whistler roots, won gold with Canada West at the World Jr. 'A' Challenge in Ontario on Dec. 19. Photo by Damon James Photography

The last shall indeed be first.

Dante Fabbro, a defenceman with Whistler roots, learned that in the best way possible over the weekend.

A year after serving as a bright spot on the last-place Canada West squad at the World Jr. 'A' Challenge, Fabbro returned this year, helping the westerners to a gold medal.

Canada West went through the tournament undefeated, eventually knocking off Russia 2-1 in the final. Fabbro, whose main gig is with the BCHL's Penticton Vees, set up teammate Tyson Jost for the eventual championship-clinching goal with three minutes remaining.

The Boston University-committed skater scored three assists overall in the tournament, which was held in Cobourg and Whitby, Ont. from Dec. 13 to 19.

Local luger Reid Watts appears to have left the youth 'A' level behind.

Watts announced via his Facebook page on Dec. 21 that he will make his World Cup debut in Sigulda, Latvia on Jan. 9 and 10. He is also slated to make senior stops in Oberhof and Konigssee, where he took third place on the youth 'A' circuit earlier this month.

As well, Watts officially qualified for the Youth Olympic Games in Lillehammer, Norway from Feb. 12 to 21. He will be joined by two other local athletes, Matt Riddle and Adam Shippit, who qualified to compete in doubles action.

The next generation of young lugers dipped their toes into the 2015-16 season at Whistler Sliding Centre on Dec. 19.

Nine racers took part across three divisions in the Splash Cup, a consistency race where competitors are rewarded for minimizing differential from one run to the next.

Garrett Reid, with a differential of 0.031 seconds, edged out Brendan Shippit in the youth 'B' men's category.

In the youth 'B' women's category, Caitlin Nash topped the division with a differential of 0.037 seconds to best Midori Holland, Trinity Ellis and Embyr Susko.

Lastly, in the youth 'C' women's event, Devon Meade's 0.12 differential catapulted her ahead of Keira Meade and Quinn Kelly.

Not to be outdone, the BC Bobsleigh and Skeleton Association (BCBSA) also got its 2015-16 proceedings going with two days of racing at Whistler Sliding Centre on Dec. 19 and 20.

As for the skeleton consistency race, Andy White won gold on Dec. 19 with Holden Kitteridge and Janelle Tucker just behind. The next day, Hugh Maguire emerged for the gold followed by Tucker and White.

As for the bobsledders, Tom Samuel and Marvin Dixon grabbed the first victory of the season with David Eastwood and Steve Stredulinsky taking second and Julie Johnson and Simone Slipper nabbing the bronze.

The following day, Samuel teamed with Efrem Violato for gold with Johnson and Slipper jumping up to second and Francis Chiasson and Kristjan Rohde securing bronze.

The season will resume with the third and fourth races of the season on Jan. 30 and 31.

Marielle Thompson suffered a scary moment in the early rounds of World Cup action in Innichen, Italy on the weekend.

Thompson, who was participating in her third World Cup ski cross event back from offseason knee surgery after a crash last season, took another tumble and sat out the rest of the event.

However, the 23-year-old posted that she was feeling alright shortly afterward.

"Not stoked about being packaged up like a Christmas present after my crash in qualifying yesterday but happy to say nothing is broken!" Thompson wote on her Facebook page on Dec. 19.

Thompson added she was looking forward to cheering on her teammates, and did a fine job of that as Kelowna's Kelsey Serwa ended up in second place behind Austria's Andrea Limbacher. France's Alizee Baron placed third.

On the men's side, Calgary's Brady Leman put up a strong result, placing fifth. Sweden's Victor Oehling Norberg captured the win and was joined on the podium by Frenchmen Jean Frederic Chapuis and Sylvain Maillier.

Canadian lugers enjoyed a little home cookin' on the weekend.

Kim McRae was a little disappointed, as she was in third at the halfway point, but was unable to hang on for her first medal of the season. One challenging corner proving to be her undoing, ultimately resulting in a two-run time of one minute, 33.798 seconds (1:33.798).

"I was fast in training all week, and felt really good. That first run was so consistent. I had a great start and was good down the track so I was really happy," McRae said in a release. "I came out of Kreisel (corner) wide and had no grip. I tried to get it back, but I just couldn't and that was the difference for me today."

Alex Gough was just a spot back in sixth place while Arianne Jones placed 13th.

The doubles team of Tristan Walker and Justin Snith also took fifth by sneaking up the standings after their second run.

Toni Eggert and Sascha Benecken grabbed the win for the second year in a row in Calgary, while Peter Penz and Georg Fischler of Austria were second and Tobias Wendl and Tobias Arit of Germany were third. Whistler's Matt Riddle and Pemberton's Adam Shippit took part in the race but did not finish after flipping their sled on the second run.

Mitchell Malyk jumped into the top 10 for the first time this season with a 10th-place finish in FIL World Cup action in Calgary.

German Felix Loch slid to the win with a time of 1:30.304, eking out the win over American Chris Madzer and Austrian Wolfgang Kindl.

Malyk also took part in the sprint race, which starts lower on the track and is just one run. He scored a fourth-place finish and was just 0.02 seconds off the podium. Loch won once again.