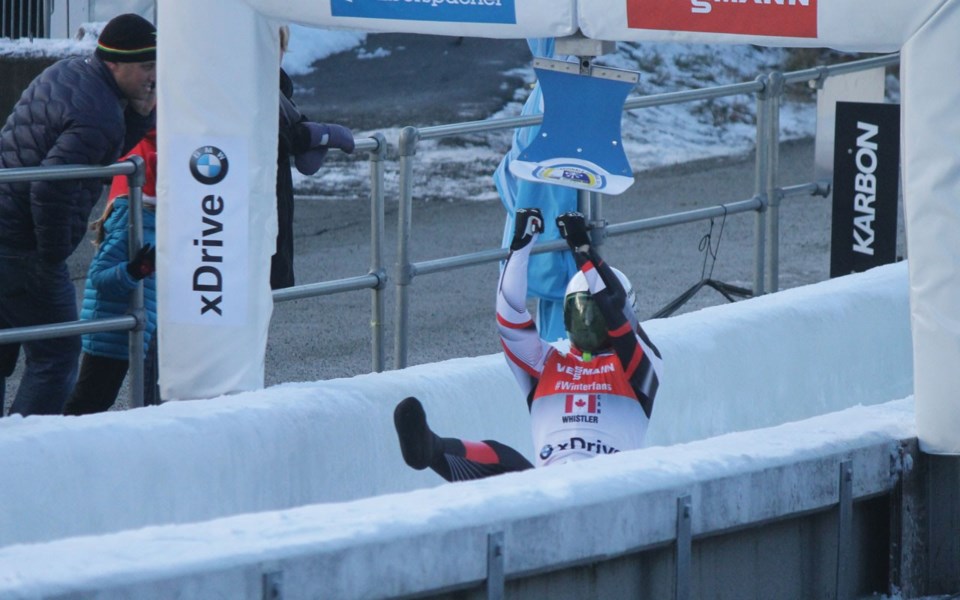 Given that the International Luge Federation (FIL) World Championships operate in the same way, on the same tracks as its Viessmann World Cup races, right down to being a two-run contest, one might not necessarily put that much additional stock in them.

But to hear it from Whistler luger Reid Watts, the World Championships are an entirely different animal.

"It's a lot more pressure than a World Cup. It's about the same race format essentially, two runs, but it's all or nothing," he said.

That's why, in the final major measuring stick before the 2022 Winter Olympic Games in Beijing, China, it's exciting for Watts that the 2021 FIL World Championships will be coming to the Whistler Sliding Centre.

While he's glad to have the event at home, Watts said the reasoning is tough to take. Calgary was originally supposed to host the race, but with uncertainty surrounding planned renovations to the track, the Canadian Luge Association (CLA) applied to move the event to the newer Whistler course. The application was accepted by FIL at its Congress in Slovenia over the weekend.

"This is going to be a huge opportunity and I'm really looking forward to racing World Championships in my own hometown. It's a dream come true, but it is a little bittersweet with Calgary's (track) being currently shut down for the time being, which is rough. It was huge for Calgary to host the World Championships," he said. "But to get it back home, that's as big of a win as we can get."

Whistler Sport Legacies president and CEO Roger Soane was thrilled to land the event without any opposition, as any other track could have stepped in and challenged for it. As it turns out, there was only one applicant for the 2023 World Championships, as Oberhof, Germany was approved at the Congress.

"People approved and voted it in without any opposition, which is great," Soane said. "Obviously, the international federation is supportive of the move, which is good, because it's always nice to have everyone's support on moving these things forward."

Though the local group will have less time than usual to pull off the race, the CLA has already been active at a national level. Soane also previously said that, after hosting the International Bobsleigh and Skeleton Federation World Championships this spring, they discovered the bulk of the work comes in the year or so before the event.

Still, there are considerations, primarily financial details, to quickly iron out.

Soane noted that the provincial government generally matches funding with the federal government when it comes to similar events.

He added that another important detail is how much to budget for additional attractions above and beyond the racing to help keep fans interested.

"It's not just putting on the event—it's putting on the spectacle around it that we have to think of," he said. "Whistler's always been good. It's been a great place to hold these championships, but I think we get a little bit blasé about it at times because we have so much going on so often."

In terms of on-ice developments, Soane is glad to see some of Whistler's legacy babies from the 2010 Games have the opportunity to race at home. As well, either toward the end of the 2019-20 campaign or early in the 2020-21 campaign, Soane anticipates a spike in the number of international lugers coming to train in Whistler in preparation, similar to what occurred in advance of the IBSF Worlds.

"Now that it's been confirmed, we do expect to see some more international training here. Normally that's what happens when the track is confirmed," he said. "Our track is quite technical and at a World Championships, you only get so many training runs before the actual event. If you can come out earlier and get used to the track and spend some time, (it's better)."

Soane added that it's also an exciting proposition to host the Worlds shortly before an Olympics, especially after hosting a World Championships shortly after a Games where several top athletes declined to attend after taking the season off.

"The year after is always a bit slower because people are saying 'Do I commit for another four years?'" he said. "After the Olympics, you see coaches changing, teams changing. Athletes start to retire or they take a break. A year before the Olympics is the ideal time. They're honing their skills and they're committed. They're really looking to position themselves so they're ready for the big game in the Olympics."