Firefighter halfway around the world 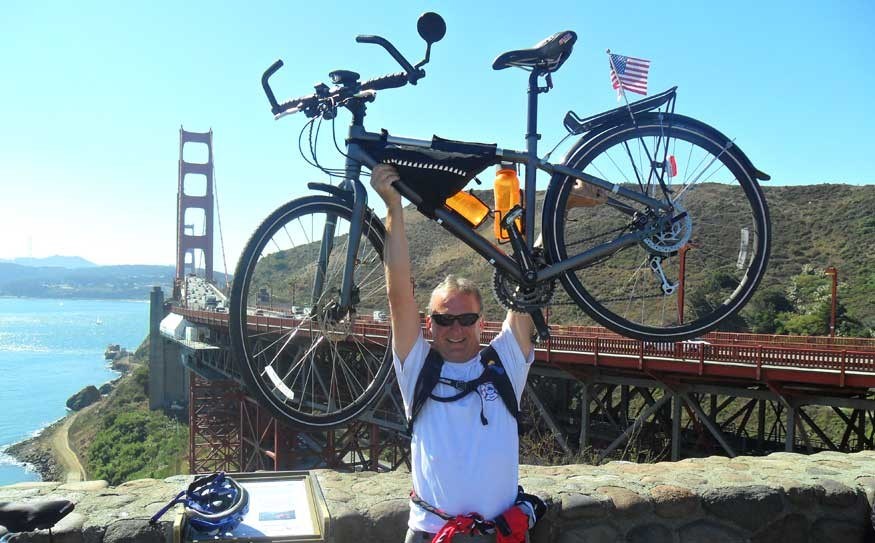 PEDAL POWER Firefighter and fundraiser Rudy Pospisil at the Golden Gate Bridge on the first leg of his bid to circumnavigate the globe.

Rudy Pospisil has now ridden halfway around the world on his bike while raising funds and awareness for cancer. If all goes well, he'll reach 24,000km this year to guarantee himself a spot in the Guinness Book of World Records as a firefighter circling the globe.

It's quite an achievement for a man who wasn't sure at one point whether he'd even be alive to achieve anything.

Determined to turn a negative into a positive, he decided to follow the example set by Terry Fox and others and raise funds and draw attention to the disease, and — leveraging firefighters in other communities to help raise money — started to ride long distances. A second homeowner in Whistler, you've probably passed him on his bike a few times while he's been training for his long rides on his touring bike.

His first journey covered nine countries in Europe, and in North America he's cycled from Vancouver to Mexico, then across the southern U.S. to Florida — a distance of 9,000 kilometres. He had planned to ride from Sydney to Cairns in Australia this year, but decided to put that off until next year and instead do a trip that will take him from Portugal to Italy and further on to the Middle East and Iran.

On his trips, Pospisil contacts fire departments around the world to host fundraisers, knowing how important cancer is to those in his profession.

"We have up to a seven-time greater risk of contracting almost a dozen different cancers than the average person because of our occupation," said Pospisil. "Firefighters will come out and ride with me in cities around the world and help arrange fundraising events. It's always great to meet fellow firefighters from around the world and work together for a common cause and share stories. The hard part is to not have too much of a party the night before I ride."

As well, he rides with a lot of people who have survived cancer and are actively fighting it, something that continues to give him inspiration.

"I have met many cancer patients on my rides that came out," he said. "Many were terminal and would not live much longer. The strength and optimism and little fear they had they were near the end was inspiring to me to carry on. I have the easy part, cycling around the globe; they have the hard part battling this disease or facing their own mortality."

The trip across the southern U.S. was interesting. Pospisil said he was run off the road a few times by rednecks. Following a section along the Mexican border was also enlightening.

"Following the Mexican border, the illegals were scampering across the desert at night," he said. "The border patrol was out in its trucks and helicopters chasing them. It was like a war zone every night. I was chased through the desert by Mexican bandits one day in broad daylight."

Water was always an issue, so he had to carefully plan ahead in some areas so he would have enough to drink.

Still, one of Pospisil's scariest moments came while riding into L.A. He stopped to fix a flat to his front tire, but it turned out to be a bullet hole.

"Either he was a good shot and hit the tire, or a bad shot and missed me completely," said Pospisil. "It seems everyone carries a gun in the southern U.S., they are so afraid of each other it's scary. Cycling Iran should be easy after all that."

Pospisil will leave for Europe soon. You can make a donation online at www.firefightercycle.com, or follow his bid to make the Guinness Book of World Records.

What: Ski and Snowboard Cross

Whistler Blackcomb is hosting three all-age ski and snowboard cross events this season, with the first event taking place Jan. 19 and 20. The first day is for practice and qualification, followed by more practice and the race heats on Sunday. Early registration is $44.80, and day-of-race registration is $50 until 9:30 a.m. on Saturday morning in the Rendezvous Lodge.

The Whistler Nordics are hosting the second event in the Coast Cup cross-country race series, inviting all skinny skiers to come out and have some fun. The Whistler Nordics will be battling Hollyburn for the Teck Coast Cup banner this year, and at least six other clubs will be taking part — although anybody can participate, whether they're affiliated with a club or not. The registration deadline was Jan. 16, but organizers could use more volunteers and spectators are always welcome. For more, visit www.whistlernordics.com.

The fourth race in the eight race Kokanee Valley Race Series is a giant slalom on Lower Franz's. Early registration is $29 either online or at Whistler Blackcomb Guest Relations, and day of race registration is available for $35 at Raven's Nest. All skiers, snowboarders and telemarkers are welcome, 19 years and older. Helmets are also mandatory. This is one of the last tune-up events for skiers taking place in the annual Peak to Valley Race.