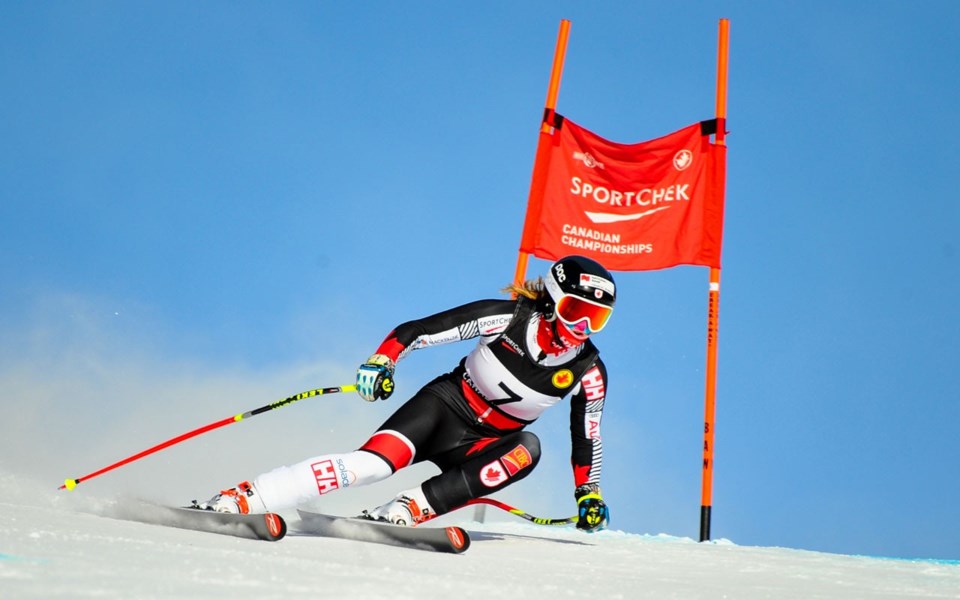 Right line Stefanie Fleckenstein is looking for a strong finish to her junior career in the 2017-18 season. Photo by Roger Witney

She's part of the Alpine Canada senior squad officially, but Stefanie Fleckenstein doesn't expect to take the World Cup by storm for another year.

The 20-year-old will concentrate on collecting another season's worth of high finishes on the NorAm Cup loop in 2017-18 as she prepares for the World Junior Ski Championships in Switzerland in January and February.

First up will be a gauntlet of races in Colorado from Nov. 18 to 21.

Returning to The Centennial State is an exciting proposition for Fleckenstein, as she posted five top-10s on the NorAm circuit last season and finished no lower than 19th in the eight races she completed at Vail and Copper Mountain.

In 2016-17, the Colorado races were a boon to Fleckenstein's NorAm Cup chase, as she finished fourth in the overall standings and second in the downhill chase. Since the top-two finishers in each discipline punch a World Cup ticket to those races, Fleckenstein is eligible for any DH race this season. While she plans to ski in the women's downhill opener in Lake Louise on Dec. 2, she's otherwise focusing on improving her skills on the development tour.

"At this point in time, it's only going to be Lake Louise, but if I do well and have some outstanding performances before January, there's always a chance they'll put me in some races over in Europe," she said. "My schedule is basically based around World Juniors this year. There's the Olympics, but for me, it's all about World Juniors. It's my last year, so they want to see me perform."

However, Fleckenstein feels the chance to race among the world's best is a great opportunity to get a sense of how she's progressing.

"Lake Louise is a learning experience. I did it last year, so this will be my second year doing it. I'll just be taking it one day at a time," she said. "I learn something every day and try to gain everything I can.

"The more experience I get on that track, the better those races will be as well."

It was a busy summer for the Whistler Mountain Ski Club alumnus as she went abroad thrice to ski and prepare for the coming season.

"My first camp was in Argentina and it was snowing well and, honestly, I think it was some of the best training that we've had in a while," she said. "After our first week there, I crashed and separated my AC (acromioclavicular) joint in my shoulder. I got sent home and I basically did rehab for three or four weeks.

"Then they found out I was cleared to ski and I got invited to go train with the World Cup girls in Chile for two weeks, which was really exciting because I hadn't gotten to train with them yet."

While the injury could have cast a pall on the coming campaign, Fleckenstein stressed she's feeling great and will be ready to go when she lines up in the start gate in just a couple of weeks.

"Honestly, it was one of the quickest recoveries I think I've ever had," she said. "It really bothered me for the first two weeks and I was super-limited with what I was able to do, but by week four, I was almost 100 per cent. I was back skiing again and didn't notice it once.

Fleckenstein's third and final camp was a trip to Europe in Pitztal, Austria, which she just returned from last week. Her training will be off-mountain until she heads to Colorado later this month for the first NorAm races from Nov. 18 to 21.

Fleckenstein noted that the Chilean camp was arguably the most important as it was a chance for the team members to work on their speed events on "one of the most unbelievable speed tracks" at La Parva.

"When we can back to Canada, it's easy to get (technical) training but the speed training over in Chile is a lot better. We were just working on getting miles on our downhill and super-G skis," she said. "We are a fairly new speed team. Everyone is pretty young. We're all under 24.

Fleckenstein got the opportunity to witness some incredible competitors up close in Chile as superstars like Lindsey Vonn and Ilka Stuhec were around, as were the American men's and Austrian women's speed teams.

Some of Fleckenstein's Alpine Canada teammates got their season underway in Soelden, Austria with the giant slalom. In the Saturday, Oct. 28 race, Marie-Michele Gagnon was the top Canadian, placing 24th, 2.87 seconds back of winner Viktoria Rebensburg of Germany. France's Tessa Worley took second while Italy's Manuela Moelgg placed third. Fellow Canucks Mikaela Tommy and Valerie Grenier did not advance to a second run.

The men's race, scheduled for Sunday, was wiped out because of stormy weather.