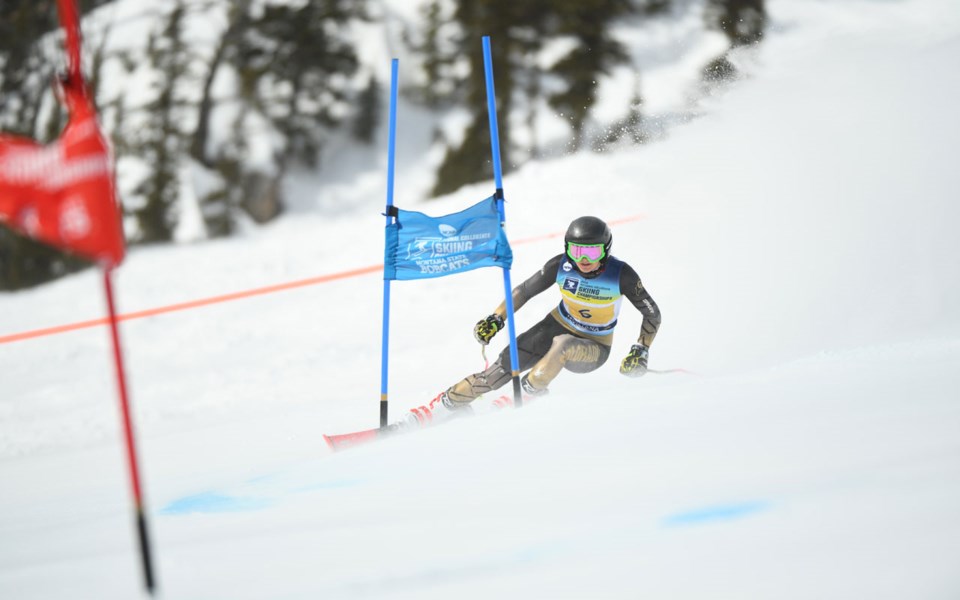 The past year has been a time of adaptability and flexibility, and according to Whistler Mountain Ski Club alum Stef Fleckenstein, the 2020-21 Rocky Mountain Intercollegiate Ski Association (RMISA) was no different.

Fleckenstein, in her third season with the University of Colorado Buffaloes, has taken part in just six college races this season, earning a runner-up finish in the giant slalom (GS) at RMISA Championships at Park City, Utah on Feb. 18.

Fleckenstein was particularly excited to do so well considering she hadn’t trained that much in the discipline, in part because of her schedule, and also due to a shoulder injury suffered in December.

“It was really exciting to do well in the GS race and it was definitely a confidence boost because I’d just been focusing so much on training that I haven’t been able to see my pace against other racers,” she told Pique. “It felt good to get some confirmation that what I’m doing is working and it also feels good late in the season because I missed so much of the early season that it feels like my season has finally started.”

Fleckenstein took fourth in the slalom the same weekend to emerge as the RMISA Skier of the Meet for the women’s division.

While Fleckenstein hit the top 10 in each of the other four races she completed, she wasn’t always satisfied with her showings. That was in part because she broke down her approach and was still recalibrating when she returned to race action.

“I’ve spent a lot of time this year focusing more on my technique. That isn’t always necessarily great for racing because a lot of times, when you’re focusing on technique, you’re slowing things down and I don’t think I really had a race mentality for the first couple races back,” she said. “Now I’m a lot more confident in my technique and I’m starting to be able to push myself more and get myself into that racing mindset.”

The race schedule has been different this season due to the ongoing COVID-19 pandemic, Fleckenstein explained. In order to minimize the number of people onsite, skiers will run back-to-back races on a day rather than having them broken up, meaning she has to account for four all-out runs, rather than two.

“I wouldn’t say my approach to the runs is any different, but I’m having a harder time managing my energy,” she said. “I do get really excited to race and I’ve had to really focus on maintaining my energy when I’m not actually racing and there’s been a lot more focus involved [between races].

“Normally it’s only two, so you can get away with draining some energy between races, but when it’s four runs, you really have to work on conserving your energy.”

While the timeline makes for long days, that’s not what’s affected Fleckenstein the most. Instead, she’s found it more challenging to adjust if the first half of the day doesn’t go as planned, though a new routine has helped her get used to it over the course of the campaign.

“You don’t have time to think about your first race; you just have to go right into your second one,” she said. “Normally, you’d have the whole night to look back on it.

“It’s a lot of mental work because you don’t always have a good first race and you don’t want that to affect your second race.”

As part of her third season with the Buffaloes, Fleckenstein qualified for the NCAA Championships, which will run March 10 to 13 in New Hampshire. From there, she’s hoping to return to Canada if spring racing is a go, but if not, she’ll stay stateside for U.S. Nationals before coming north for summer training.

With graduation on the horizon, Fleckenstein has set her sights on cracking the Canadian team once again, an endgame that has been different from some of her fellow skiers.

“My particular mindset of wanting to race after college and trying to requalify for the Canadian team, it puts you on a different training plan and a different track than a lot of my teammates,” she said. “I have a grip on college racing but I don’t think college ever gets easier, honestly.”

One small change Fleckenstein has enjoyed is online classes, as she can learn at night while spending the day focused on her training. It worked for the fall semester as she earned straight As.

The family legacy in The Centennial State could continue after her graduation: Fleckenstein’s younger sister, Katie, joined her at Colorado this year, though she is did not race this season as she is recovering from an ACL injury.

“She’s hoping to get back to it next year,” Fleckenstein said. “She’s been training a lot and she’s looking really good.

“I think she’ll be a star on the college circuit.”