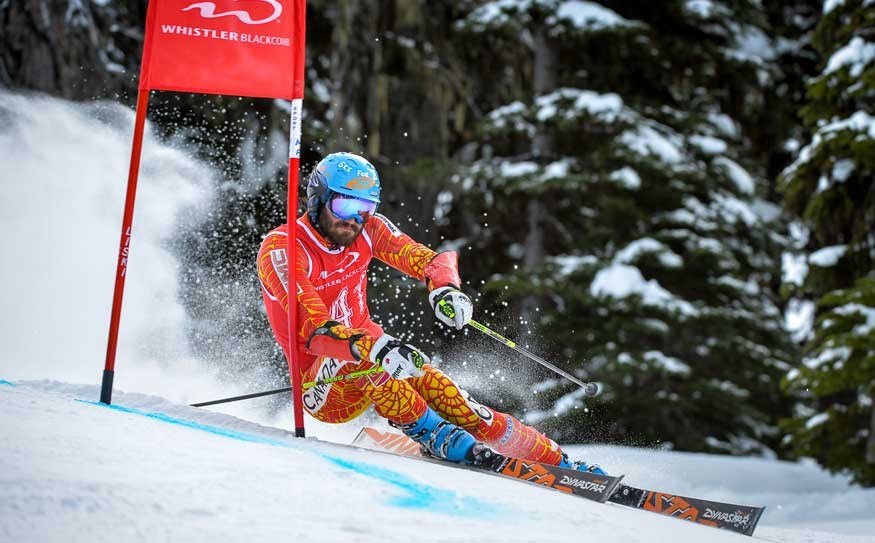 The annual Whistler Peak to Valley Race is one of those events where it gets harder the less time you spend getting from A to B, as lactic acid builds up in your muscles. Holding edges and carving the courses' 180 gates gets progressively harder until the athletes are literally screaming when they reach the finish line, 1,440 vertical metres down the mountain.

That's why it comes as no surprise that Davey Barr, Stan Rey, Aleisha Cline and Julia Murray — all recent members of the Canadian Ski Cross Team — posted some of the fastest times on both days of the event. While ski cross racers never race competition courses as long, racers can take as many as five runs of a course in a single day of competition and endurance counts.

There was no plot among the ski cross racers to enter the event this year, it just sort of happened that they all found themselves in the field. Stan Rey, the fastest male on Friday, raced the event when he was 19 and joined a team this year with his father.

"It definitely hurt a lot," he said of the effort to get to the bottom. "Going into it, you know you're in for a grudge match halfway down the course. Out of the gate I went 100 per cent like I did was 19 and about a minute and a half in your legs start burning, your lungs start burning and you have to grunt through. The bottom half isn't skied nearly as well as the top half, you can get the angles or hold the edges you would if you were full of energy.

"But it's an awesome event and really cool to see. There was a guy this year who was 89 years old and race, so it's great to see the ski community come together like that for this event."

Looking at the competition — a lot of former World Cup and provincial team racers — Rey didn't know if he could be the fastest. "There was one guy I was on the provincial team with who's a bit older and a bit fitter than I am, and I thought for sure he was going to beat me. I wasn't thinking about too much to be honest, but it was good fun to be competing."

Rey was with the national ski cross team for two seasons before he decided that his future lay in big mountain freeskiing. Recently he's been waiting for more snow to get out filming again, keeping his eye on the forecast. "I think I'll be back out this weekend, it's good to see a little snow in the forecast again."

The Peak to Valley took place over two days with teams of four competing for the fastest times in their combined age categories. Because the snow conditions can change hugely from day to day, two members of each team race on each day. As well, the event is co-ed, and every foursome has to have at least one female member.

The course itself is around 5km long from top to bottom, although with all the twists and turns around 180 GS gates it's actually longer. Top speeds are hard to measure, but the top female athletes averaged over 50km per hour and some of the men averaged around 60km/h.