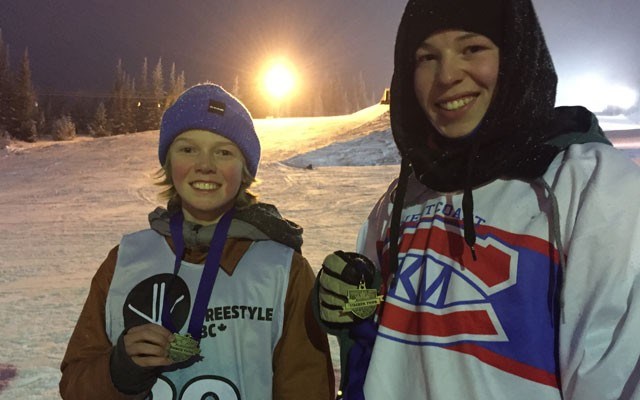 For the second weekend in a row, the Whistler Blackcomb Freestyle Ski Club (WBFSC) had a crew at Apex Mountain Resort.

With over 40 skiers wearing WBFSC colours, head coach Jeff Fairbairn was thrilled to see Whistler represented so well. He noted there were also some newer clubs with added reinforcements, giving a boost to freestyle skiing in general.

"I can't remember the last time I saw that many athletes there at a Timber Tour event, so that was really neat to see that," he said. "There were all sorts of other clubs that have started to go to Timber Tour events from Panorama and Sun Peaks, too.

"It's expanding. To see a new club and new faces from other parts of the province that we haven't been before, it's good and it shows the growth of our sport in B.C."

As for the Timber Tour competition itself, a number of WBFSC competitors hit the podium.

Whistler's U16 girls slopestyle team swept the podium with Josephine Howell, Skye Clarke and Jessica Linton taking medals, while among the U14s, Cassidy Butterworth and Chase Capicik took second and third. As for the boys, Julien Chartrand and Kai Smart ran first and second in U16 while Kai Martin topped the U14 podium. Owen Ternoway was third for the U18s.

The U16 girls also repeated their feat on the moguls course, though Linton, Ava Dunham and Emma Bosco were the top three, in order. Maya Mikkelsen was tops among the U14s while Butterworth took third. As for the boys, Heejun Kim and Ternoway were second and third among U18s behind former WBFSC member Sam Cordell, while Oscar van Dongen and Philip Kang were also second and third in the U14 group. In dual moguls, meanwhile, Kim and Ternoway were first and third for the U18 boys, while Linton, Dunham and Bosco swept among U16 gitls. Mikkelsen, meanwhile, topped the heap for U14 girls, edging out Clare Bosco, while Kang and van Dongen took second and third among the U14 boys.

Chartrand's showing on the slopestyle course en route to a medal was an eye-popping one for Fairbairn.

"He won his category and had the highest score of the day, too, out of anyone in slopestyle. That was his first podium win ever," he said.

With the Timber Tour and Super Youth cavalcade coming into Whistler in early February, there should be plenty for the local rippers to build from.

"The nice thing about the one that we host is the jumps are a little bit bigger. The slopestyle competition will be a little more challenging just because of the larger jumps and the length of the slopestyle course," he said. "There's a very strong possibility that that one will see more of our local members at that event."

Full results are posted on www.freestylebc.ski.