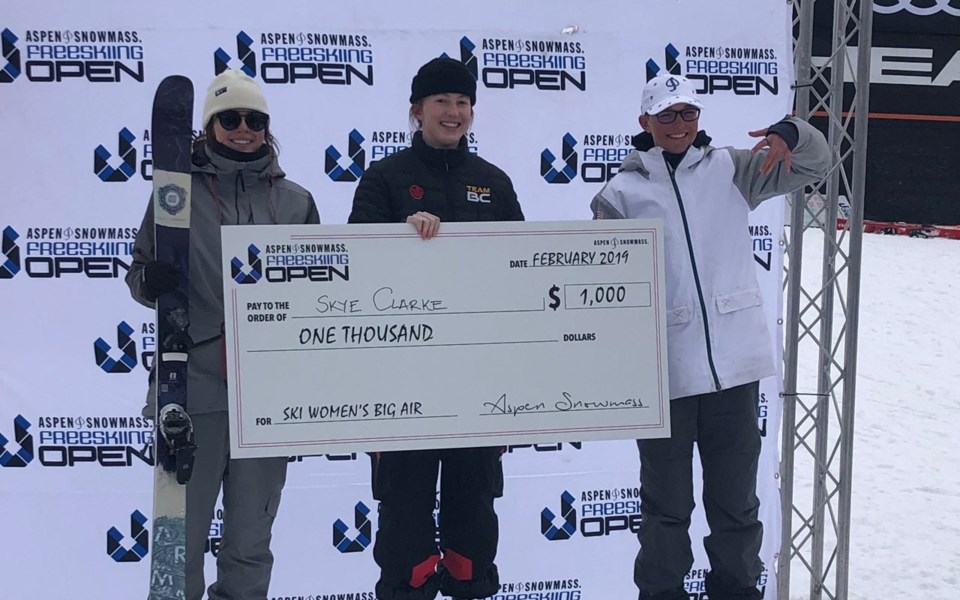 The 2019-20 season started off with plenty of promise for slopestyler Skye Clarke.

The Freestyle Whistler grad kicked things off by earning a $10,000 Fuelling Athletes and Coaching Excellence grant, and in December was named to the Canadian team heading to Lausanne, Switzerland for the Youth Olympic Games.

However, it was in Switzerland that the 17-year-old's season took a turn, as she was sidelined with the flu and unable to compete.

"I was feeling terrible and I just couldn't do it on the comp days," she said. "It really sucked, but it happens."

Though she wasn't able to compete, Clarke was still glad to have at least gotten some of the Youth Olympic experience before falling ill, staying in the village for about a week.

"It was really cool seeing all the different teams with everyone in their uniforms. You would just go to lunch or something and you'd meet somebody from Germany," she said.

Feeling better after spending a few days recovering at home, Clarke had a fairly quick turnaround to head to California for her NorAm Cup season debut during the first weekend of February. She was admittedly still regaining her strength at Mammoth, where her bad luck continued as she suffered a broken binding in slopestyle qualifiers.

However, Clarke got past her recent disappointments and bounced back last weekend in the NorAm Cup contests at Aspen-Buttermilk, Colo., winning both the slopestyle and big air competitions on Feb. 14 and 15, respectively.

"I just try to have fun and not think about what's happened the past few weeks. I focus on what I'm doing now," she said.

In the slopestyle event, Clarke tamed "the biggest course of the year," posting a best run of 79.50 to blow past American Jenna Riccomini (73.330 and fellow Canuck Megan Cressey (70.33). Clarke took advantage of Aspen's shark fin feature, a rarity in NorAm Cup competition.

"I was the only girl doing a [540] on there, so I think that probably helped," she said. "I've gotten a lot more comfortable on big jumps and big courses."

As for the big air, Clarke appreciated the new scoring rubric where competitors are scored on the best two runs out of three, where they are required to spin in two different directions, as opposed to the former best single run of two format. Her best efforts, a switch 720 and forward 900, resulted in a combined 170.60, where she again topped Riccomini (164.20) and Cressey (146.40).

Clarke spoke from the site of the next NorAm Cup stop in Calgary, where she'll compete this weekend before returning home for a week. March brings her final two contests at Park City, Utah and Le Relais, Que.

"I hope that I'm happy with all the skiing that I've done this year," she said. "It would be nice to get results, but as long as I'm happy with my skiing, I've accomplished everything I wanted."

Full results are online at www.fis-ski.com.