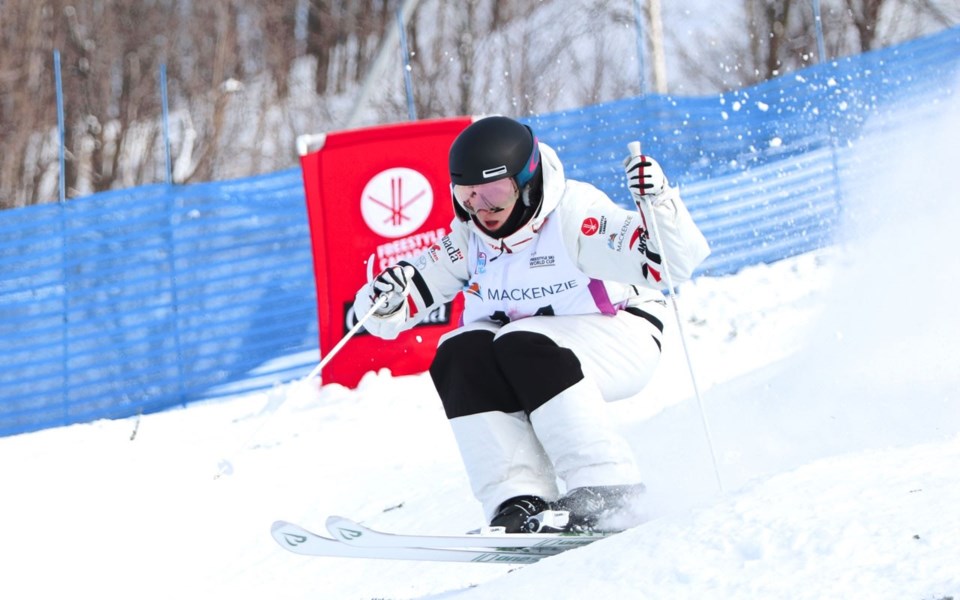 Flying high Sofiane Gagnon has made her mark on the FIS World Cup moguls tour this season. Photo by Valerie Goyette/Freestyle Canada

Whistler's Sofiane Gagnon has been on an upward swing for the entire FIS World Cup season.

The moguls skier started the season with an 18th-place showing at Ruka, Finland in December and since then, has only equalled or improved on her prior results.

The past two weekends, the 19-year-old took eighth-place finishes, first at Lake Placid, N.Y. on Jan. 18 and then at Mont-Tremblant, Que. on Jan. 26.

"It just feels really good that I'm improving every competition," she said. "I'm really happy to be consistently moving forward."

On the men's side, Canadian Mikaël Kingsbury got past Japan's Ikura Horishima and Kazakhstan's Dmitriy Reikherd for the victory after missing the podium for the first time in two years at Lake Placid. Philippe Marquis and Laurent Dumais placed ninth and 10th, respectively, while Pemberton's Brenden Kelly took 15th.

While Gagnon had World Cup experience last season after competing at Calgary and Mont-Tremblant, 2018-19 marks her first season on the circuit full-time.

She credits regularly being around the team, which boasts veterans like legend Mikael Kingsbury and the Dufour-Lapointe sisters, with helping her to take the next step as she looks to follow their paths.

"It's a different feeling. After getting some experience in the two I did last year and then coming this year and doing the full tour, which is exciting, it's different because now I feel like I'm part of the game, I'm part of all the other girls who are doing the world tour," she said. "I'm trying to not be intimidated and doing my best run every time."

Gagnon feels that the major adjustment she's made this season is to have more patience and to put less pressure on herself, which in turn has led to steady improvement.

"I think that I've really improved my mental game. In previous years, what was really holding me back was myself. I thought that I wasn't performing the way I was capable of," she said. "This year, I've competed for so long now and there's no reason to be stressed about anything. I'm learning to use my nerves to help me compete better."

That new attitude manifested itself most prominently in New York, as in finals, Gagnon was in a position where she had nothing to lose and everything to gain.

"In Lake Placid when I just made it into finals in 16th place, I was on the bubble for a long time. I was relieved when the last girl went and I made it in," she said. "I just thought to myself that I have nothing to lose. If I fall, I'm still in 16th spot, so I can only move up in the ranking from here. I just tried to take risks and ski like I knew I could and not hold back."

Though Gagnon has travelled to events like the Junior World Ski Championships on three occasions in Sweden and Italy and to competitions in Australia, she's been excited to get new stamps on her passport with her first-ever trips to China and Finland this year.

"It was my first time really travelling with the World Cup team," she said. "To be surrounded by different people and see how they train and prepare, I think I changed how I prepare."

Gagnon will make her first trip to FIS World Ski Championships in Utah on Feb. 8 and 9. She's looking forward not only to competing at that level, but to see other freestyle-ski cousins like slopestyle and halfpipe competitors with whom they don't normally cross paths during the season.

Schwinghammer and Kelly were also named to the team.