New national training facility now available after months of construction and years of fundraising
Dec 31, 2020 8:00 AM By: Megan Lalonde 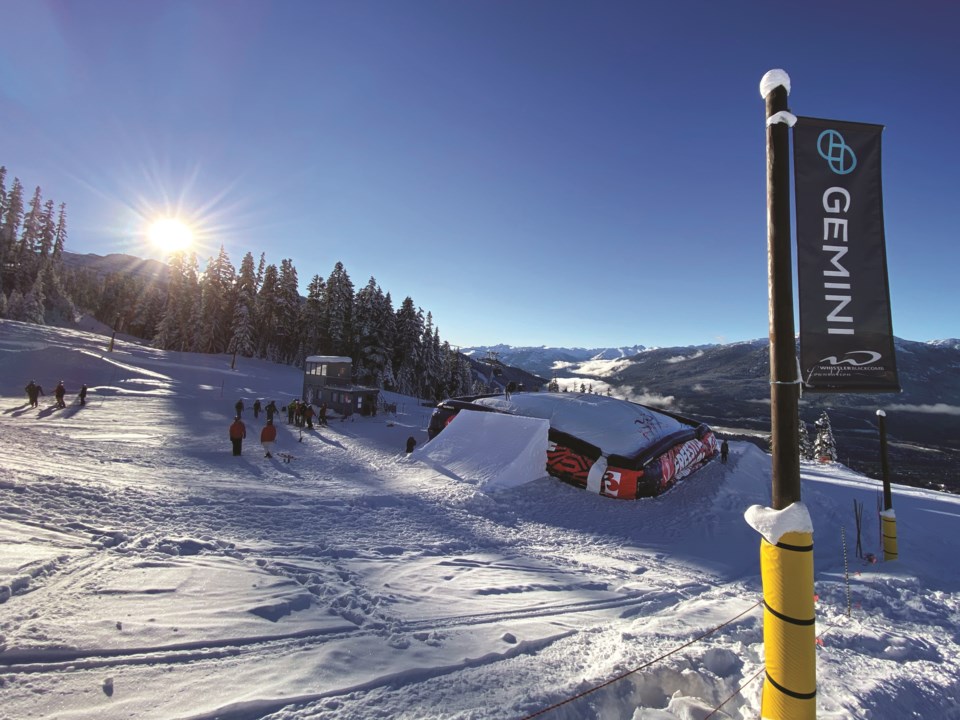 Although the 16-year-old would have rather kicked off his winter training here, attending class in-person at Whistler Secondary School instead of online, Apex has the only suitable freestyle training course in the province.

As of this week, Gannon and his teammates have a new training headquarters in Whistler, now that construction on the long-awaited Gemini Freestyle Centre is officially complete.

The new national training centre and event site opened to athletes on Monday, Dec. 28, four months after construction on the project began and five years after its supporters first launched fundraising efforts. It’s located on Blackcomb’s Sorcerer run—just above the midstation gondola—and includes a world-class mogul run, an airbag to fine-tune high-flying tricks safely, a judges’ stand, a warm-up space for athletes and a storage area, all carefully measured and built to regulation specs.

“Now, I can just go up the hill on the weekends or whenever I’m free and go and train, whereas before if I wanted to train on a full course, I would have to put at least a week aside to travel to the closest full course at Apex,” Gannon said.

“When you work for many years with a great team of volunteers and then you’re actually standing there, looking up and seeing all the kids in action, it really is wonderful,” she said.

The centre provides a home for the Whistler Blackcomb Freestyle Ski Club (WBFSC), as well as the BC Freestyle Ski Team and Momentum Ski Camps, while Smart said snowboarders and freeskiers will also be welcome to make use of its features.

The centre makes it easier for the WBFSC to host events, said Smart, in addition to opening up the possibility of accommodating higher-end events, like NorAms, or even, potentially, a World Cup.

The goal is to further build the sport, said Smart, pointing out that Whistler freestyle skiers previously lacked both the type of legacy venue that local cross-country skiers or sliding athletes inherited after the 2010 Games, and a convenient home-base like the one the Whistler Mountain Ski Club has in Creekside.

“We’ve always wanted to have a beautiful [turnkey] legacy venue here,” said Smart. “Where you literally open the door and turn on the music, and you can run an event, and the timing system and everything is ready to go.”

The centre also has clear benefits when it comes to athlete development. The beauty of the course’s set up, explained Smart, is that skiers can hit each feature—and, effectively, each freestyle discipline—from the bumps to the pipe to the airbag jump, in a single lap.

“I just love that everything’s together. It’s all so close, which means that some of the kids hitting the airbag, if they want to try out the moguls, they can come try out the moguls,” said Gannon, who spent the last two days on Blackcomb, shovel in hand, building jumps and bumps along the Gemini Freestyle Centre’s course.

“We don’t have enough kids in moguls, because everyone wants to ski park. So I think it’ll really help, especially with the younger kids that are just coming into freestyle,” he said.

In between the course-building, “I’ve done a couple of runs where I’ve actually skied it, and it’s so much better than anything we’ve had in Whistler before,” he said, adding, “There’s a lot of happy people.”

The centre is a long-time dream come true for members of the local freestyle community, an idea Smart said she “inherited” from the former WBFSC president when her sons joined in 2011.

“I came on board as a club volunteer and then joined the club as a board member back then, and said ‘Well, let’s make it happen.’ Little did I know what I was getting myself into,” she added with a laugh.

The caveat? The donation had to be matched.

Freestyle Whistler and the NTC Society managed to accomplish their goal through three gala fundraisers, additional funding from Freestyle BC and B2ten, a grassroots donation campaign—“Friends and Family” donors are now recognized at the centre, in the form of a plaque—and by “sealing the deal” with a naming rights sponsorship last year from Gemini, a New York-based cryptocurrency exchange and custodian founded by Olympic rowers and bitcoin billionaires Cameron and Tyler Winklevoss.

Yes, the same Winklevoss twins that were portrayed by actor Armie Hammer in The Social Network.

The Winklevosses, it turns out, are mogul skiing fans who attended Momentum Ski Camps—run by Smart’s husband, John—for three summers in a row. It was in a gondola in 2019 that Smart casually pointed out the intended future home of the training centre to the brothers, and the connection was sparked.

Though the ongoing border closure prevented the Winklevoss brothers from making the trip north to help open the centre, Smart said plans to welcome them for a delayed “Grand Opening” will be put into motion once travel restrictions are lifted.

Construction on the project was also delayed by about two months due to the coronavirus pandemic, but after breaking ground in August, project managers Mick Gannon, Marie-Claire Gravel, Jennifer Dunn and Scott Cordell “worked incredibly hard” to complete the build just in time for the winter season, said Smart.