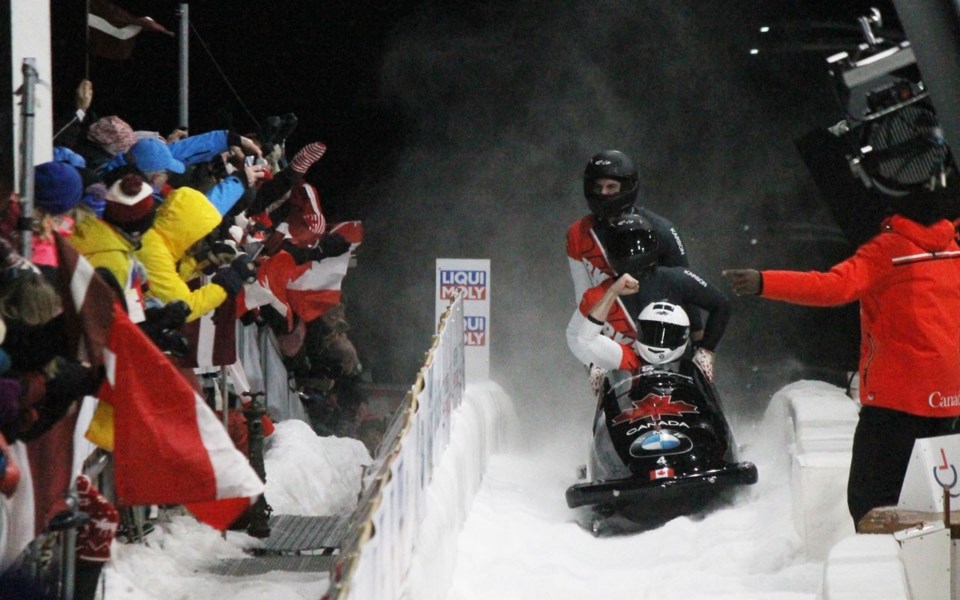 The BMW IBSF World Championships wrapped up at Whistler Sliding Centre on March 9 with the Germans capping an incredible two weeks at the event.

Germany won five of six total gold medals, and nine medals in all, including a second gold for pilot Francesco Friedrich in the four-man event. Canada medalled in all four bobsleigh events, but did not in the skeleton races.

Friedrich, who claimed a two-man victory on March 2, hit the top of the podium again in the four-man race. His team, which also included Candy Bauer, Martin Grothkopp and Thorsten Margis, won the final three heats to best sleds driven by Latvia's Oskars Kibermanis and Canada's Justin Kripps.

Friedrich, who has historically had mixed results on the Whistler track, was near perfect at the World Championships—and overcame some pain to do it.

"It feels so great and we did a great job (even) with an injury to one of my legs," said Friedrich after capturing the second four-man World Championship of his career. "It feels so good and I feel so happy and proud of our best."

With the push times being so much closer in four-man, Friedrich said it's harder to win that event. In this case, too, with additional weight in the sled, there were higher speeds, with Friedrich cracking a new high of 157 km/h.

"I think it's a little bit too much sometimes ... If the track would be a little bit easier in the down part, it would be no problem, but you must steer very well and clean to not crash in the 50/50 corner. That makes it especially hard."

"We were really happy to get the two-man medal, obviously, but it's a little bit sweeter to get the four-man because we haven't had much success in four-man," he said. "It's been a while, too, since Canada's won a four-man medal at World Champs, so it's pretty awesome."

Kripps said it was also gratifying to have such success considering the foursome was a new team this year. While Stones and Coakwell are veterans, Sommer is a relative newcomer and quickly learned under the old hands, even spending the first half of the season on the Europa Cup circuit to get up to speed.

"We're just starting to gel as a team and we're getting some of our equipment set up and dialled in. That's what's helped us have some success," Kripps said. "It's pretty rare to have a new team and have this kind of success, (especially) in one year."

Kripps, who, along with his teammates, was visibly pumped after completing his final run, explained that he was thrilled with how the team perfomed on the final day, especially as it helped seven-year veteran Coakwell land his first-ever World Championships medal.

"In the third run, I came out attacking hard. I wanted to win the race so I made the run a little bit risky so I could really go for it," he said. "It got a little hairy but luckily I was able to save it."

It was the Germans and then everybody else in women's skeleton at the BMW IBSF World Championships at the Whistler Sliding Centre on Friday afternoon.

Germany took all three podium spots as the nation's athletes routed the four-run competition, with Tina Hermann earning gold over Jacqueline Loelling (0.38 seconds back) and Sophia Griebel (1.17 seconds back).

Notably, fourth-place finisher Anna Fernstaedtova raced for Germany until this season, when she began representing the Czech Republic.

Hermann loved how the track was running so quickly, and said it helped her performance.

"I'm really happy. I can't describe it," said Hermann, who also won the World Championships in Innsbruck in 2016. "I love this track here. I love the track conditions. The ice was really great."

Hermann set a new track record with her first run of the competition on Thursday afternoon, but Loelling subsequently bested it by 0.07 seconds with her final run on Friday to narrow the gap. With a fairly substantial lead on her compatriot, Hermann sought to regain the best-ever time down, falling short by just 0.01 seconds.

"I was nervous, but also a little bit angry because my teammate broke my track record. I was thinking, 'Come on, lady, you can do it again,'" Hermann said.

For her part, Loelling was thrilled to add a new best to her silver medal.

"It's really nice to have the track record on the fastest and (most) difficult track in the world," she said. "I was a little worried at the top because it was the final but on the track, I knew it was a good one."

The top Canadian was Elisabeth Maier, who has three World Cup victories to her name, including one here in Whistler in 2016. She said the Canadian team, which also featured Mirela Rahneva (a two-time winner on the World Cup tour this year) and Madison Charney, was hoping for better finishes. Maier took 10th while Rahneva and Charney were 12th and 17th, respectively.

"I'd lie if I'd say I wasn't disappointed," Maier said. "Obviously, we came in with much higher expectations, podiums in mind. We've won races here in the past."

Maier said that there weren't any equipment choices that she would have made differently, adding that her own performance wasn't up to her own standards.

"It was the fastest I've ever slid here and I wasn't prepared for that, so that's on me," she said. "My equipment was amazing. It was my problem. It wasn't the equipment."

Martins Dukurs is living proof that past successes don't diminish the hunger for future titles.

With five BMW IBSF World Championships already under his belt, the Latvian skeleton legend captured a sixth in convincing fashion at the Whistler Sliding Centre on Friday morning, winning all four runs and besting runner-up Nikita Tregubov of Russia by 0.51 seconds. Korea's Sungbin Yun was third, 0.88 seconds back.

With a nearly insurmountable lead of almost a half-second entering the final heat, Dukurs broke the track's start record—held by Russian Alexander Tretiakov—that had stood for nine years.

Dukurs set himself up for success by setting the new track record in his second run on Thursday morning, besting Yun's 2017 mark by 0.08 seconds.

In a competition full of incredible moments for Dukurs, his astonishing start stood out.

"I'm more surprised by the push," he said. "I was just focused because I needed to do my best." After struggling in training, Dukurs turned it on when the heats truly mattered.

"It's such a hard track. It's really, really hard, so I'm happy about (the track record)," he said.

After a tough start that saw him sit 17th at the midpoint, Canadian veteran Dave Greszczyszyn posted the fifth- and seventh-best runs in Heats 3 and 4, respectively, to climb to 11th overall, just 0.02 seconds outside of the top 10.