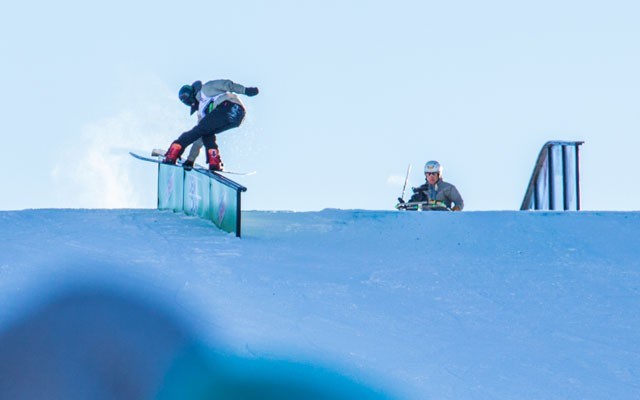 SHARPE IN THE VILLAGE Snowboarder Darcy Sharpe, shown here competing in slopestyle in Colorado earlier this season, will take part in the Gibbons Style Session. Photo by George Crosland

Darcy Sharpe has a packed weekend in the final days of the World Ski and Snowboard Festival.

The 20-year-old Whistler snowboarder will open with the Monster Boarderstyle on Friday and Saturday (April 15 and 16) before taking part in a brand-new event Saturday night.

"I'll probably be pretty tired after doing boarderstyle all day," he said. "But that's alright, that's what we're here for."

The Style Session is a rail jam where a skier and a snowboarder are teamed up and tackle the course at the same time. Twenty pairs of skiers and boarders will take part in the competition in Skier's Plaza. Jesse Millen, Teal Harle, Gillian Andrewshenko and Yuki Tsubota are among the other athletes who will headline the event.

With a bit of a lighter competitive year on the WSSF schedule, Sharpe is glad to take part in a highly visible event.

"I'm really happy there's a snowboard event down at the bottom this year because World Ski and Snowboard Festival is getting a little low on the snowboarding and skiing side of things," he said. "It's nice that we've got an event down there to show the tourists what we've got going on and also just have good vibes."

Sharpe said he's never competed in an event quite like this one, and is admittedly a bit apprehensive, but will make the most of it.

"I don't really like the fact that they're making us team up right along with skiers but that's all right, it's going to be fun," he said.

The preliminary rounds will kick off around 8:30 p.m. during Chromeo's DJ set on the Fido Mainstage, though the finals will get underway around 9:15 p.m.

Gibbons' senior manager of marketing and partnerships Sara Burke expects a raucous atmosphere at the event.

"(Fans) can expect for it to be a pretty big party. There's an incredible day of programming that the festival's putting on with top-notch musical acts. From our perspective, we're just hoping to continue that party into the evening and show people an amazing time," she said. "There's going to be a world-class talent showcase and we're going to be presenting a competition in a format that we don't think has been seen before."It should be something fun for everyone who's around enjoying the festival."

The skier and snowboarder will hit the course at the same time, with separate judges scoring their runs. The two scores will be combined for the pair's final score.

"We really felt it was important to offer equal prize money across the board for whichever pair ends up being the winner," she said. "It's a winner-take-all-type thing. We want this to be something where there's completely fair representation in associated prizing."

Each team will get two runs apiece in the qualifiers while the top 10 teams will advance to a one-run final.

Meanwhile, boarderstyle action begins with qualifiers on April 15 beginning at 12:30 p.m. Finals will take place the next day beginning at 1:30 p.m.