Longboarders race downhill at Britannia Beach
May 22, 2009 7:17 AM By: Andrew Mitchell 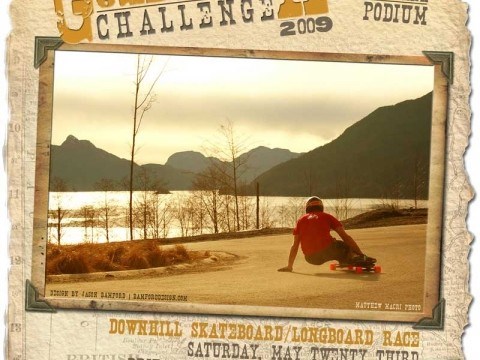 Britannia Beach is historical for a lot of reasons, mostly related to its past as a prosperous mining town. On Saturday, May 23 the town will make a different kind of history by hosting one of the fastest and most technically challenging downhill longboarding races on Copper Drive.

Boarders are expected to hit speeds of 100 km/h on the course, which drops 325 metres over 3.5 km of winding mountain road. There are five corners on the course, include three hairpins where athletes will have to lay out to control speed and made the corners.

The field is limited to 100 riders, a third as many as took part in the Attack of Danger Bay 8 races at Pender Harbour this past weekend. Only the best of the best will get to compete for $2,000 in prizes.

Red Bull has signed on to sponsor the event, which is being produced by Unkle.ca and Coast Longboarding.

The contest is essentially a test. In exchange for hosting the contest, the sanctioning bodies have agreed to tell their skaters to stay off the Britannia roads on non-competition days or receive a lifetime ban from competition. As well, the skaters know that the town of Britannia and the Ministry of Transportation will be watching them closely, and that a successful event in Britannia could herald more events in the corridor in the future - including a proposed Whistler event in 2010.

"From the start we approached the community association to host an annual event there that benefits the community and Sea to Sky. We're taking a different approach where, instead of being rebels and breaking laws, we can provide one day a year where longboarders can skate in a controlled environment that's lots of fun and everybody benefits," said organizer Lee Cation. "It's a long term approach working with the community and Ministry of Transportation, and this event is really just a starting point for us."

There will be closures on Copper Drive during the day, but traffic will be able to get through

Longboarding has always existed as a subculture within skateboarding, but recently it has enjoyed a huge rebirth internationally in participation in downhill events, and in B.C. in terms of sales - up 30 per cent this year according to Gold Rush organizers. In the last two years the number of B.C. events has grown from five to nine, attracting racers from longboarding hubs around the world, including California, South America and Western Europe. B.C. riders hold their own, according to Cation.

"B.C. has some of the best events and the best prize money, and there's a whole snowboard and skateboard culture here that's more permissive of these kinds of events," he said. "We also get a lot of athletes from downhill skiing, people that are addicted to the speed and have that mindset.

"The International Gravity Sport Association, which is kind of like the international sanctioning body for the sport, keeps tabs on events and last year the three leading point-getters were Canadian, from B.C."

Every downhill race has its own format, but all events are decided by the clock. Cation says groups of three or four longboarders will race down Copper Drive in a bracket system, with the top-two racers moving on to the next round.

Cation says the athletes are legitimate, train hard, and are serious about their sport. Some are hoping that it will return to the X Games, and that it could be in the Olympics one day.

Once upon a time the sport was part of the X Games. Despite the fact that fans voted to keep it in, the organizers at EXPN reluctantly dropped the event because it requires a road closure and other safety considerations, while BMX riders and skateboarders can use the same ramps and street courses.

Although there are injuries, for the most part they are limited to scrapes and bruises, with the odd broken bone or concussion. Cation says that's because riders are required to wear full helmets and specially padded suits to minimize road rash.

The races take place from 9 a.m. to 6 p.m. on May 23. Spectators are welcome, and it's free to attend. For more information visit www.unkle.ca and look for the 2009 gold Rush Challenge poster.