Good conditions for an Ironman 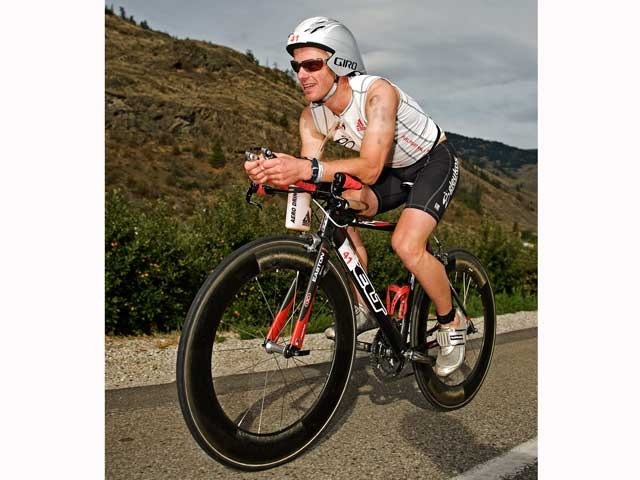 While the coast was being drenched in rain, the sky was overcast for the start of Ironman Canada Sunday in Penticton, and temperatures stayed cool during the day. The only impediment was a strong head wind that hit some athletes in the late afternoon, but times were faster on average than in 2007.

The winner was Bryan Rhodes of New Zealand in eight hours, 30 minutes and 12 seconds. Bernhard Heibl of Austria was second in 8:34:34, while Victoria, B.C.’s Jasper Blake was third in 8:36:08. Blake, the 2006 champion, was second until partway through the run course, where he couldn’t keep up the pace and fell back slightly.

Only one of the nine Whistler racers in the event competed in the Elite category. Ollie Blake, the younger brother of past Ironman Canada champion Jasper Blake, was 18 th overall in a time of 9:08:19. It was Blake’s second Ironman, and he managed to shave almost 15 minutes off his time from the previous year. He was consistent from the start and got faster as the day went on, placing 25th on the swim, 26 th on the bike, and 15 th on the run despite a series of injuries to his foot, knee and back this summer that hampered his training.

“I was hoping the break the nine hour mark, but 9:08 is still pretty good,” he said. “I’ve been in and out of injury for most of the summer, but I managed to piece together enough training to get to the start line which was my goal.”

Because of his injuries Ollie Blake avoided running and biking the two weeks before the race. Blake paid for his efforts, and spent five hours in the medical tent after the race.

“I hit the 100 kilometre point on the bike and my legs were feeling bad, and the whole last 80 kilometres I was wondering how I was going to run a marathon,’ he said. “What kept me going was all the people from Whistler in the race and on the sidelines cheering me on. It was a tough run, but the Whistler crowd got me to the finish.”

Despite his troubles Blake plans to sign up against next year. “I love the challenge,” he said. “It’s pretty rewarding to get to the finish, I don’t care where you come in.

“I think if I could run for the whole summer that would really help, every year for the past two years I’ve had piecemeal running here and there. If I could run a whole summer I think I could easily crack nine hours.”

Whistler’s Christine Suter had an exceptional day despite the fact that she looked at Ironman as a training opportunity. She placed 427 th overall out of 2,200 athletes, and 10 th out of 120 athletes in the women’s 35 to 39 age group.

“In my mind I said I’d like to do it in 11:30, but then considering the more limited training I’ve had I thought that 11:40 was probably more realistic for me,” she said.

“The swim is definitely my strongest event. With 2,200 people out there trying to kill each other in the water I always start at the very front of the line with all the guys — I’m probably the only pink cap up there. I just try to get out fast and find some free water that’s away from the crowd. I always think I swim more than I actually should because I’m out on the side doing my own thing, so when I saw I was first in my age group I was pretty pleased.”

Suter also shrugged off the wind on the bike and marathon, keeping her head down as much as possible and staying positive. The fact that the temperature stayed low, in the mid-20s instead of the plus-30 temperatures predicted earlier in the week, also helped.

“There is so much mental that happens in an Ironman, and it’s such a long day that you go into your head a little. I always tell myself that the wind is not blowing as hard as I think it is, that it’s fine, that I’m going to have it at my back half the time.”

She had a few stomach problems on the marathon leg, and walked a few hills. She also stayed positive until the feeling passed, remembering her experiences in trail races during the season.

“I was always surprised how the people I passed walking up the hills would pass me running down them, and I thought, ‘if it works for them, it will work for me,’” she said. “I just tried to run down every hill as fast as I could.”

Having so many Whistler residents in the race and on the sidelines also helps.

“Everybody from Whistler did really well, and you get to see everybody along the way,” she said. “That was great, it’s what keeps you going half the time when you have friends and people out there cheering you on.”

Christine and her husband Paul, another Ironman veteran, did not sign up for Ironman Canada in 2009. Instead, both opted to compete in Idaho next year at the Ironman Coeur d’Alene.

Scott Brammer, running his eighth Ironman, just missed his goal in finishing under 13 hours but managed his second goal of finishing before dark with a time of 13:20:44. He was 233 rd out of 315 racers in the 35 to 39 age category.

Taralyn Day, competing in her first Ironman, crossed the finish at 14:08:12. Her best event was the swim.

The race ended at midnight, 17 hours after the start, although some competitors elected to keep going even if their time won’t be counted.

The top four competitors from each age category qualified to race at the Ironman World Championships in Kona, Hawaii in October.