Whistler Nordics growing steadily with Olympics on the horizon
Oct 16, 2009 7:55 AM By: Andrew Mitchell 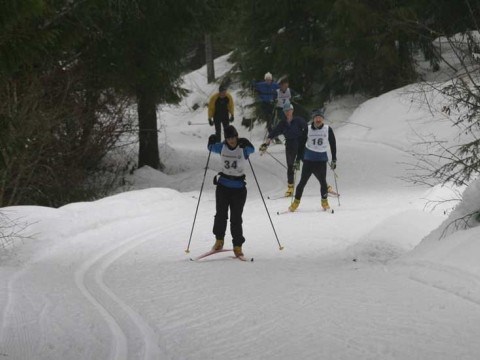 It's no secret that participation in cross-country skiing is increasing. Mountain bikers are taking up the sport as a way to stay fit in the off-season, while a greater offering of programs is getting more adults and kids into the sport. The addition of Thursday night races through the winter added a social element that the sport was missing.

But the biggest factor driving people to the sport is the Olympics, and what Whistler Olympic Park represents to cross-country clubs throughout the Lower Mainland.

"With Whistler Olympic Park the clubs are working together for the first time and meeting there, clubs from Whistler and Pemberton, from Vancouver, the new club in Squamish," said Tom Barratt, president of the Whistler Nordics. "It has provided a focus for us all, a place to have clinics and events. There's a lot more rubbing of shoulders and cross-fertilization of the club and a sharing of resources.

"And when you have the top people in the sport coming into Squamish and Whistler and helping out, and national development teams out there sharing their sport, it can't help but contribute significantly to the development of the sport and the club."

The addition of a full-time coach, Maria Lundgren, has also played a major role in expanding the number of teaching programs for kids and adults, as well as the creation of a development program to compete at the provincial level and feed the national development programs. This is the second year for the Sea to Sky Devo team, which offered training three days a week to strong skiers for just $4 per session, and sent skiers to events through the season from Coast Cup races to the provincial championships.

Last year Lundren, formerly a member of the Swedish national team, also managed to recruit a few visiting team members from Sweden to guide a workshop for junior skiers - an opportunity that could only arise through the Whistler Olympic Park.

"We placed third in the midget championships in the province last year, which isn't something we've ever been able to do before, and that's a huge success that has caught the attention of cross-country ski organizations and Cross Country B.C."

The Olympics and Paralympics will limit access for Whistler Nordics programs this year, but Barratt says the benefits far outweigh the small inconvenience. In the meantime, he says the club will train on non-competition trails that are available at Whistler Olympic Park until the end of January, as well as trails at Callaghan Country and Lost Lake. Whistler's trail selection also got a boost this spring with the addition of a bridge over the River of Golden Dreams at Meadow Park, allowing programs to cross over and train on a flat space.

Another Olympic legacy that will benefit the Whistler Nordics is the Austria Passive House at the entrance to Lost Lake. It will house Austrian athletes and VIPs through the Games. Next summer the building will be handed over to the municipality, with a $150,000 grant from the Whistler Blackcomb Foundation securing office space for the Whistler Nordics and Whistler Off Road Cycling Association.

That will make a huge difference for the club next season, said Barratt.

"Right now we're always borrowing space around town, rooms in hotels or people's homes, renting from the municipality. This will give us a fantastic base that's right on the trails. We'll have office space, meeting space and a gathering space, and that's huge for us."

The Whistler Nordics' membership is growing annually according to club administrator Suki Cheyne. Registration for the 2008-09 season was up 12 per cent over the previous year with 275 members. Most of that growth was in youth programming.

"Our skill development programs, which follow the Cross Country B.C. youth skills program and the Long Term Athlete Development Program guidelines as set out by Sport Canada has been very successful in increasing participation numbers and selling out every year," she said. "The numbers speak for themselves with double digit growth year on year." In 2007 there were 40 youth members, in 2008 there were 60 and in 2009 there were 86 children and youth.

The limiting factor is often the number of coaches and volunteers available to lead programs, and to that end Barratt and Cheyne urge everyone to get involved.

"We rely on parents and volunteer coaches," explained Cheyne.

Another attraction was the hiring of a full time coach in 2007. Lundgren has been leading the youth programs for the past three seasons, and has launched programs for adults as well.

To keep her on the payroll the Whistler Nordics are applying for grants and working with Cross-Country B.C. The Masters programs also generate some revenue for the club to cover coaching costs.

And while grant programs have been cut across the board this year the Whistler Blackcomb Foundation's donation to the Austria Passive House project will save the club money in the long run and allow more resources to be dedicated to coaching.

Other fundraisers include the annual ski swap on Nov. 8 (date and location to be confirmed) and the sale of club hats to send athletes to the B.C. Midgets championship in Salmon Arm and the B.C. Winter Games in Terrace.

The Whistler Nordics are hosting their annual general meeting tonight, Thursday, Oct. 15 at the Spruce Grove Field House. The doors open at 6 p.m. for member registrations and to sign up youth for programs like the development program. The meeting starts at 6:30 p.m. with a presentation on the club's achievements over the past year and plans for the future.

All of the board positions are up for election, and members are encouraged to step up.

"It's a fun thing to do and not at all overwhelming," said Barratt. "It's pretty rewarding participating in a sport when you have all the world's best skiers in the area, and interested in your club. The opportunities that the Olympics have given us are just amazing."