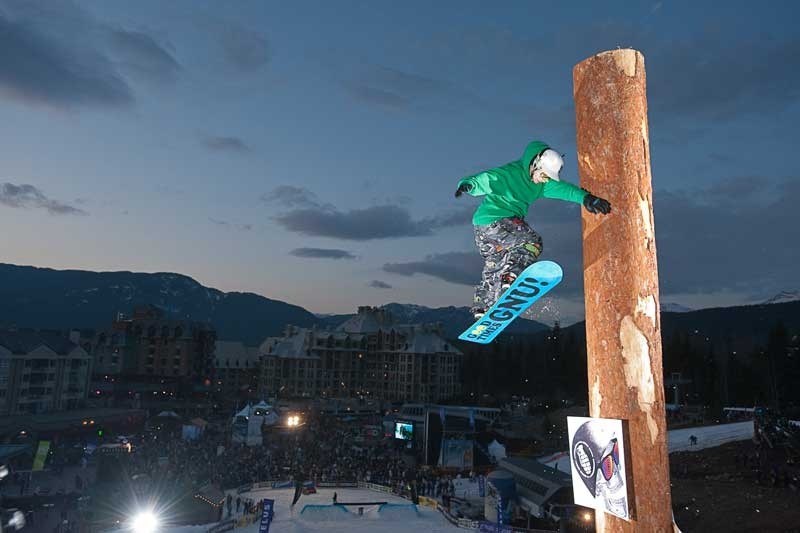 The consensus among snowboarders taking part in the fifth annual Grenade Games last week - the first time the event has taken place in Whistler - was that Grenade rider Danny Kass really knows how to hold an event.

Over five days riders competed in a series of contests, some more serious than others. There was a poker run, a dual moguls slalom race, a superpipe contest, a mini ramp contest, and the Grande Finale - a small but super-sized slopestyle course at the base of Whistler Mountain.

The Poker Run kicked off the event with riders cruising around Whistler and Blackcomb collecting cards for their poker hands. Because of the number of good hands the organizers decided to go with a lottery to see who got to sit at the poker table with Danny Kass.

One of the side events of the Poker Run was an appearance at the Pontiac GMC race centre on Blackcomb, where riders needed to post a time in the top-32 to qualify for the Dual Moguls Slalom the next day.

The following day the racers cleared their heads on the moguls course, with racers carving around gates, navigating a steep set of moguls, and airing out over the jump to an icy landing. While Danny Kass enjoyed all of the events, he said the mogul event was his favourite.

"I just really enjoyed the format, it definitely pushed people out of their comfort zone and the course was really steep and hard," he said. "It was pretty rad the way everybody stepped up and got into the event, and had so much fun. I got knocked out early but I had a blast watching the others.

"Nobody is doing moguls competitions any more, but I think they're ready for a comeback."

The top riders in the time trial faced off in a series of brackets until just four riders remained. Molly Milligan got high marks for making it through the first two rounds and to the final eight, before being bumped out by Josh Bauer, who knocked off Danny Kass in the first round. Logan Short, Myrosha Daley and Dan Raymond also made the semi-finals, with Myrosha Daley edging Logan Short in the finals to take the win. Dan Raymond bested Josh Bauer in the small final to take third place.

Kass also presented gold ticket entries into the Grande Finale slopestyle to the five riders who made the most out of the mogul course jump.

Things got a little more serious over the next two days as athletes trained and qualified for the superpipe event. As a two-time Olympic silver medalist in halfpipe Kass was the obvious favourite, but he opted not to compete.

T.J. Schneider won the grand prize of $5,000 with a double corked 1080, with Guillaume Morisset and Dustin Craven rounding out the top-three. Dennis Bannock won $500 for Best Crash, Louie Vito pulled a 1260 to win $500 for Best Trick, Kory Wright won $500 and a golden ticket for his handplants on the stump that was brought in to mix things up a little, and Sammy Luebke won $500 for best air.

From there a select few athletes were sent bungee jumping, while others prepared for the mini ramp skateboard competition.

That set up the Grande Finale, which took place under the lights on Saturday night with a crowed of up to 15,000 spectators looking on.

The course was short compared to most slopestyle events, but included a bit of everything. At the start, snowboarders had to bomb drop about 10 feet off a platform onto the in-ramp to two different options, a massive table or a 15 metre channel gap. Next, riders had the choice between a rail section with a kinked rail and down flat box, and another table with a huge log between the take-off and the transitions. The idea was to tap the log with your board, although some used it to redirect their spins or change spin direction.

Next up was a small stepdown jump, followed by a set of jumps with a pipe stretched in between.

Dave Fortin was a casualty of the finals after hitting his head while trying to clear the table. He was carted off with a concussion and broken finger, but little else.

Kass was the top rider in the qualifier but had some trouble in the finals as the course hardened and he carried too much speed into the lower stunts.

Fans also loved Andrew Burns, who landed a double backflip off the channel gap, but the judges were looking for a complete run with big tricks on every feature.

In the end the judges gave the highest marks to WSSF podium regular Craig Beaulieu, who rode strong in every heat. He earned $10,001 for efforts - the biggest prize in WSSF history by exactly one dollar.

"I just think I was consistent with every run," said Beaulieu, who also had the support of his friends from back home in Timmins, Ontario. "I just really liked this course, we had fun on it all day. It was really more about riding with your friends but I knew if I made it into the finals I had a shot at winning... it's great because I really like the money, and the money likes me!"

Beaulieu said it was tough watching Dave Fortin being taken off course in a stretcher while waiting up top for his turn.

"Fortin's just on another level than everybody," he said. "I told him that earlier this week and he said he was the one trying to keep up with us. But he just charged everything and went huge, and he always got back up. I knew he was going to be okay."

"I wasn't even thinking about (the podium). It was nice to be in the finals, but I was just having fun the way I was having fun all day," he said.

Dubeau didn't compete in other Grenade Games events after dislocating a rib, but with the help of a chiropractor he was able to compete in the Grand Finale.

"Everything flowed really well," he said. "The scariest part was the bomb drop in, at least for me. It was just cool to be sitting up there, blinded by the lights. Eventually you just had to step up and do it."

Kass said the events and parties were better than he could have imagined, and called it the best year ever for the event. "I'm already thinking about next year, and how cool it would be to bring this event back to Whistler. I have heard nothing but positive things about the Grenade Games, the festival, the mountains, the after parties. Everybody is going home happy, myself included."

Kass, who has silver medals from the Torino and Salt Lake Olympics, is making another run at the Games in 2010.

"I'm going to go for it again," he said. "I've been hitting the pipe pretty hard recently and working on new things, and I'll be spending a lot of my summer training wherever I can find snow. Any time you get a chance to compete in something like the Olympics you have to go for it."