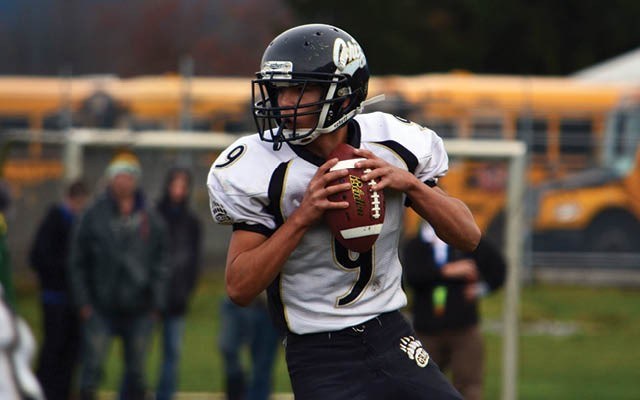 back under centre Kex Nelson was one of several Pemberton Grizzlies to have strong outings despite a season-opening loss on the road in Oregon. file photo

The Pemberton Grizzlies will look to rectify some mistakes and build off some encouraging play when returning to the gridiron this week following a season-opening loss in Oregon.

The young Grizzlies gained a wealth of experience when matching up against the Bandon Tigers, who hosted the Pemberton team in a bowl-game, festival-type setting on their home field near Oregon's south coast.

Although the Tigers emerged with a 48-0 triumph from the Sept. 13 contest, and Pemberton took the field without a handful of starters, Grizzlies head coach John Burleson said there were still plenty of standouts on his roster.

Starting quarterback Kex Nelson moved from his regular defensive spot on the corner to play linebacker, and led the Grizzlies in tackles. Captain Mackenzie Graves was a "physical force" on the line before checking out of the game with an injury, said Burleson, while fellow veteran Jeremy Lacsamana was also a solid presence in the trenches.

Newcomer Adam Bell had a strong game at free safety, while Brett Hennessey provided an offensive spark for Pemberton when the Grizzlies were able to get the ball in his hands. Rookie pass rusher Kobe Burton put plenty of pressure on the Bandon quarterback, while Burleson is also excited about kicker Robin Grylka, a Swiss exchange student that has joined the squad.

"He has a leg. This kid can hit from 40 yards away," said Burleson. "He didn't get a chance to do it in the game, but he punted well and did great on kickoffs, so we were very impressed with him."

The Grizzlies struggled on special teams against Bandon, surrendering three touchdowns, but growing pains like those are expected with a roster as young as Pemberton's, said Burleson.

"It's a learning experience, they're going to grow with it and build on it and be ready for our next opponent," he said.

"They really came together as a team and fought. They didn't give up in any way, shape or form."

This weekend the Grizzlies will travel to play Squamish's Sounders in an unofficial "Texas scrimmage," as the two young squads look to iron out some kinks in their game before getting into their remaining schedules.

"It's an opportunity to help develop these young men, and that's the most important thing, that they get an opportunity to learn the game," said Burleson. "And it'll give us an additional week of shoring up the areas we were deficient in in the first week."

The Whistler Saints peewee team also got their North Shore Football League season underway on the weekend, but start the campaign at 0-1 after suffering a 33-0 defeat. The loss came despite a strong outing from Josh McKenzie carrying the ball, a team-high five tackles from Julian Day and impressive work on special teams from Kai Bacon.

The Saints resume their schedule on Sunday, Sept. 21, against the North Vancouver Falcons at Norgate Park. The team is still looking for new recruits — any interested 10- or 11-year-old players, or their parents, can contact head coach Ralph Forsyth at ralph@ralphforsyth.com for more information.