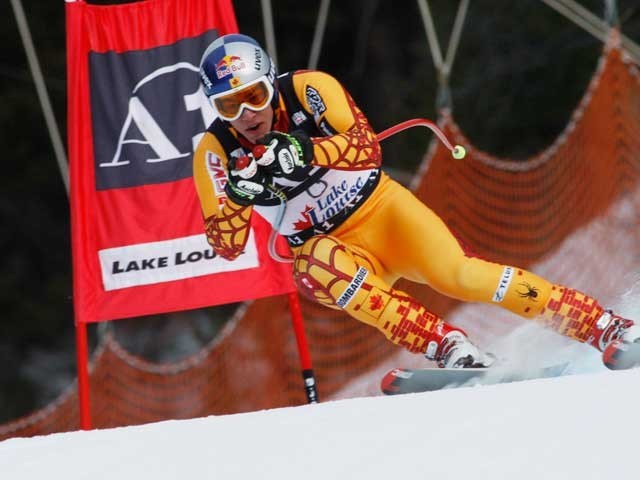 Quebec’s Erik Guay snapped out of his medal drought this past weekend at Beaver Creek, Colorado, placing third in the opening downhill race.

While he’s raced consistently in the top-30, Guay’s last podium appearance was a bronze super G medal at the end of the 2006-07 season. He missed the podium last year, but managed to finish in the top-five three different times while also improving his results in giant slalom — a new discipline for Guay on the World Cup circuit.

The Beaver Creek medal came one week after the 27-year-old Guay finished 10 th and seventh in downhill and super G races at Lake Louise, even as commentators were wondering if impending fatherhood might be distraction for the young skier this season.

Aksel Lund Svindal was first in the downhill, just 0.06 seconds ahead of Marco Buechel of Liechtenstein. Rounding out the top-30 for Canada, Whistler Mountain Ski Club alumni Manuel Osborne-Paradis and Robbie Dixon were 23 rd and 24 th respectively. John Kucera, who won Canada’s first medal of the season the previous week in the SG, was just out of the points in 32 nd place.

“It feels good to be back on the podium for sure,” said Guay. “Last week I was just sort of finding my race legs. It’s always tough at the beginning of the season seeing where you are stacking up in this competition when you haven’t been there for six or seven months.

“I don’t think it was a mental hurdle or mental block. I mean, finishing fourth isn’t the end of the world, sometimes it is just a couple of hundredths here and there. But it feels good to be back on the podium.”

Guay said he still had more work to do on his form, which he said didn’t feel completely natural yet. “I have some times when I am skiing very well but sometimes I go back to my old habits,” he said.

Erick Guay followed up with a 13 th place finish in the super G, while Kucera finished sixth. The win went again to Svindal of Norway, followed by Austria’s Hermann Maier and Michael Walchhofer.

In the final giant slalom race, Benjamin Raich of Austria broke his own medal drought to take the win, followed by American skier Ted Ligety and Svindal, making his third podium appearance of the weekend to take the lead in the overall standings.

The only Canadian to make two runs was Jean-Philipe Roy, who finished in 21 st place. The other Canadians did not qualify for the second run.

Meanwhile the Canadian women were having a tough time at Lake Louise with snow, wind and flat light changing the conditions from run to run. Despite strong performances in the training runs, the best the team could manage were top-10 performances.

They also had one fewer chance to race, with the second downhill cancelled because of the weather.

In the opening downhill, Emily Brydon was the top Canadian, in seventh place, while Kelly VanderBeek and Whistler’s Britt Janyk were 14 th and 15 th respectively.

“I don’t mind if it’s bad weather,” she said. “It’s too easy when it’s sunny. I had a great run, I had a lot of fun. The track is in great shape. There was quite a lot of wind up there but that’s how it goes sometimes, it can’t always be sunny and beautiful.”

The win went to American skier Lindsey Vonn, who had four previous wins at Lake Louise. Nadia Fanchini of Italy was second and Maria Riesch of Germany third.

The weather deteriorated overnight, and the organizers made the tough decision to cancel the race the next day because of heavy snow and poor visibility. The track crew managed to get the track cleared, but in the end the wind and visibility issues were too much, according to the FIS judges.

That left one event for the women’s speed team, the super G on the final day. Emily Brydon earned her best career super G result, finishing in sixth place, while Kelly VanderBeek was seventh. Britt Janyk was 12 th .

“I’m not on the podium, but I’m getting there,” said Brydon. “I’m definitely going for the podium. I think I’ve finally beaten my demons here.

“It’s like a new Emily. I am calmer mentally and have a better perspective. I think if you stay happy and focused, success is going to come.”

Nadia Fanchini took the win, while Fabienne Suter of Switzerland, and Andrea Fischbacher of Austria tied for second place.

While Canadians winning medals is a good story for the country, the best Whistler story of the weekend is the resurgence of Mike Janyk in slalom. Although his opening World Cup event in Finland didn’t go as well as planned, Janyk won back-to-back Nor-Am Cup races in Winter Park, Colorado last week while training for the next World Cup race of the season.

In the second race, Janyk beat Albrecht by half a second, while Biggs moved up to third. Also for Canada, Trevor White was fourth, and Brad Spence 10 th .

On the women’s side, Anna Goodman was the top Canadian in the first race, earning a bronze medal behind Susanne Riesch of Germany and Sterling Grant of the U.S.

On the second day Goodman moved up to first place, with Brigitte Acton in second. Kiley Staples of the U.S. was third.