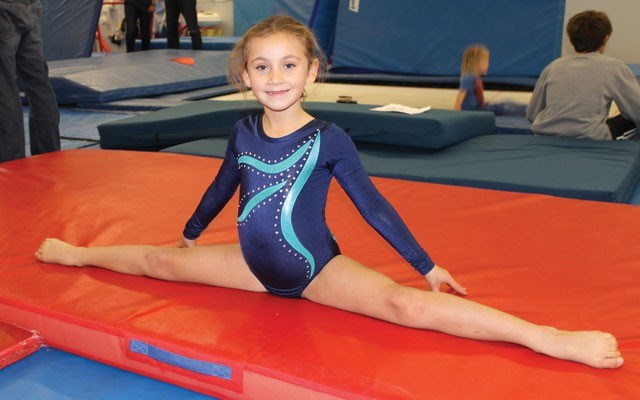 The Whistler Gymnastics Club welcomed the community into its Oros facility on Nov. 23.

The open house was part of the RBC Sports Day in Canada initiative organized by ParticipACTION. Athletic organizations from coast to coast mark the occasion in different ways, but all events strive to encourage increased physical activity.

For program manager and recreational artistic head coach Tami Mitchell, the day was all about play and encouraging physical literacy among participants while also saying thanks for the significant local contribution to the Oros centre.

"We're super happy to give back to the community since they gave us so much," Mitchell said.

Those who attended were able to try a wide variety of activities, from bouncing on the trampoline to climbing rope.

"(It was) just to showcase a little bit of everything we do, to show gymnastics is not just what you see on TV," she said. "Gymnastics is the foundation of all sports."

Mitchell said the club has talented gymnasts because several of the athletes are skilled in other activities ranging from mountain biking to skiing.

The club's trampoline athletes are getting set to compete in New Westminster this weekend, while the competitive artistic gymnasts will participate in their first meet of the season in February.

While the event wasn't officially held to boost registration, Mitchell said, winter registration for people of all ages begins Dec. 1 and can be completed online at www.whistlergymnastics.com.

Ski Callaghan, which operates as a joint venture between Whistler Sport Legacies/Whistler Olympic Park and Callaghan Country Wilderness Adventures, will open the 900-metre loop near the biathlon range.

Opening weekend events include a Praise Ullr party for the Nordic snow god, complete with a bonfire, atop the toboggan hill on Saturday, Nov. 29 at 1 p.m. The 2014 Tech Coast Cup #1, organized by the Hollyburn Cross Country Ski Club, will be held Sunday, Nov. 30 at 11 a.m. Those looking to enter must do so by Nov. 27 at 9 p.m. at www.zone4.ca.

Other areas of the park will be open when more natural snow falls, as the base for this season's skiing is provided by "Callaghan Gold" – last year's snow that was preserved under sawdust. In a release, organizers explain "Callaghan Gold" is the first natural snow storage project in North America. Even with this week's snowfall, there is concern that warm conditions leading up to the opening would claw back the gains. However, park spokesperson Silke Jeltsch said in a follow-up email groomers are on standby for more snow, and trails will open "immediately" when it is feasible.

Those looking to monitor progress can check www.skicallaghan.ca.

In the release, Ski Callaghan also announced it would extend its early-bird pricing until Dec. 10. The pricing, which is $300 for adults, $150 for youth (or $75 on a family pass) and $150 for midweek seniors, was initially set to end on Nov. 26. For more information or to purchase passes, visit www.skicallaghan.ca.

The 2015 BMO Vancouver Marathon will feature a new option for runners looking to participate, but run shorter distances.

Runners will be able to join forces to create a four-person team for the new marathon relay, which will feature legs of between five and 13 kilometres. Participation in the May 3 event will be capped at 250 teams.

The first leg will run through Cambie, Kerrisdale and Dunbar, while the second leg will run through Pacific Spirit Park and then through Point Grey, Spanish Banks and Jericho Beach. Both are 12 kilometres. The third leg is a five-kilometre run along Kitsilano Beach, before finishing with a 13-kilometre run across Burrard Bridge, by English Bay and along the Stanley Park seawall before finishing downtown.

Registration cost for the relay is $279 per team until Nov. 30, at which point it increases to $299 until Jan. 31. Fees for the full and half marathons and the eight-kilometre run also increase on Nov. 30.

For a full list of events and costs, visit www.bmovanmarathon.ca.