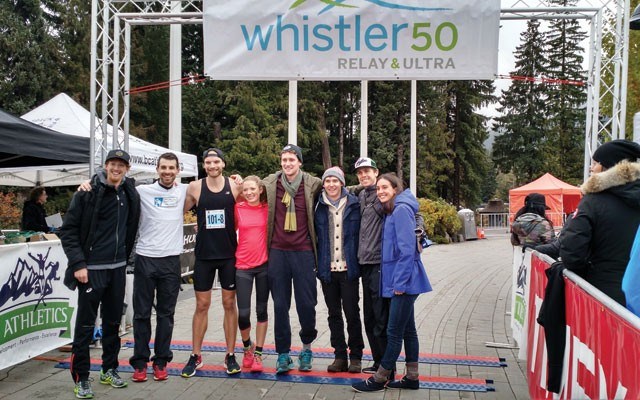 Chris Winter is only a year removed from his first-ever Olympic appearance, but he still appreciates getting back to the grassroots of running.

Winter, who placed 25th in the 3,000-metre steeplechase in Rio de Janeiro, Brazil, in 2016, is getting set for his fifth running of the Whistler 50 as part of a team that includes his wife and fellow long-distance runner Rachel Cliff. The race will kick off this Saturday, Oct. 14 at 6 a.m. for the roughly 50 elite runners taking on the entire 50-mile (80-kilometre) course, and 8 a.m. for relay teams. The first ultra finisher is expected around noon with the relay winners anticipated to cross the line around 12:30 p.m.

The 31-year-old from North Vancouver said events like the Whistler 50 highlight inclusiveness in running that might not be seen elsewhere.

"If you're an NBA basketball player, you're never going to go and play pickup with an average weekend warrior, but we're able to do that. You're able to have Olympians running alongside first-timers," Winter said. "It is something that is pretty special to our sport."

Cliff, 29, noted she gets a boost from the atmosphere of running the beautiful trails of Whistler alongside a variety of people.

"One of my favourite parts about running is meeting someone who's not an elite athlete but is taking on their first-ever half marathon. I find it just as exciting as anything else," Cliff said. "In other competition, you can lose sight of the basics of why everyone does the sport."

Both have run the race four prior times, and are now on an entrenched team that has run each year since the race's debut in 2011. Winter said he appreciates the chance to chip in a leg as part of a larger group.

"There's been a group of friends that's been doing it since Year 1 when it moved from the Haney to Harrison Race, to Whistler. Both of us are running nerds and love the sport in general," Winter said. "Running is such an individual sport and any time you get that chance to be on a team, it's a different kind of dimension to the sport.

"It's a great combination of athletics mixed with socializing."

And in addition to enjoying the event, Winter has Whistler connections and is here regularly as his brother, Kevin, runs Coast Mountain Brewing.

As well, the Whistler 50 lands at an ideal time with a little lull between seasons.

"The summer track season is over and we're heading into cross-country season, so it's in a really good time of year where we're able to fit this type of race into our calendar because it's not a championship style of race. It's definitely more on the fun side of things," he said. "We like to get together a really good team and then go and try to win it every year."

Though they like to win, there's not quite as much on the line as at some of their other events. Winter and Cliff stress they still find other goals for which to strive, be it a course record, personal best time or, for Cliff, finding a way to beat the guys. She'll feel some butterflies as she gets ready at the starting line.

"For the big cross-country races and track races, you have to focus and you get nervous at least a week out," she said. "For something like this, you get to chill out but the morning of, I always get a little nervous."

Winter noted the team gets a chance to bond after it finishes the race as it chips in its volunteer shift, with each member helping out instead of providing the minimum one racer.

"We typically complete the course a little quicker than others so we actually do our volunteering all together," he said. "We head out into the forest to volunteer and we just hang out there in the sunshine."

"Or the rain," chipped in Cliff.

"Or the rain," repeated Winter. "But the sunshine stands out more."

Race director Tom Skinner said the course has some minor changes this year, including incorporating the underpass near Whistler Golf Club, but the most intriguing change for athletes and spectators is to move one exchange zone from the PassivHaus to Whistler Olympic Plaza to double the number of athletes in that central hub.

"Having both activations in one area should add a little bit of extra excitement in there," he said. "It's less walking around for the team and it's easier to keep track of everybody."

Winter is entirely onboard with the change, as it'll help bring more of the athletes together to help further facilitate the "festival-like atmosphere" of the race.

"There's such great energy at the exchange zone and it was unfortunate it was in two different areas. Now you're going to have everybody all in one spot and I think that's going to be a huge benefit to the race," he said.

"The idea is it's a central place for everyone to hang out," he said.

Skinner also stressed the event is a fundraiser for sea to sky food banks. The race has collected the equivalent of $36,000 in non-perishable donations to this point with the hope of pushing that number beyond $40,000 after this Saturday.